A number of names have been used to describe virtual organizations and virtual teams, including spider webs, modulars, clusters, learning networks, perpetual matrices, spinouts, third- millennium groups, virtual organizations, boundaryless organizations, postmodern organizations, alternate officing, extended enterprises , flexible manufacturing networks, distributed global work teams, turbo task forces, autonomous work groups outside existing organizational structures, and virtual factors (Guss, 1997). Regardless of the name assigned to the organizational feature that supports virtual project activities, it is clear that organizations must be sensitive to the needs of the virtual projects, which in turn will become a major component of the enterprise revenue enhancement.

Unless one uses the description of the project work packages to describe the virtual team, the concept of a virtual team is somewhat difficult to define, partially because different scholars focus on different aspects of the team. Parker (1994) defines a team as a group of people with a high degree of interdependence geared toward the achievement of a goal or the completion of a task. Katzenbach and Smith (1994) define the team as a small number of people with complementary skills committed to a common purpose, performance goals, and approach, for which they hold themselves mutually accountable. Mayer (1998) defines the virtual team as a team that is composed of people who are distributed across buildings , states, and countries . Generally, virtual project teams transcend distance, time zones, organizational boundaries, national borders, and continental entities. Such a team would assemble for a specific project and then disband when the project is finished. Delisle et al. (2001) describe the virtual team as a collection of task-driven members behaving as a temporary group, whose members are separated by geographic or temporal space. Notwithstanding the specific definition in use, a project team is the basic unit of performance for most organizations, particularly for those that have adopted the manage-by-projects approach. This definition would hold for traditional as well as virtual projects.

There are indications that virtual project organizations are the next form in the evolutionary chain of organizational structures (Guss, 1997). In 1998, Mayer noted that the virtual organization, or the virtual corporation, is the model for corporations in the future. Only a few years later, that vision has become an accepted reality for many organizations. A salary survey of project management professionals indicated that virtual teams and global projects transcend the boundaries of multiple companies, governments , and cultures. The results showed that 21% of the respondents worked on a project involving multiple states or provinces , and 15% worked on projects involving multiple continents (Project Management Institute, 2001). One of the reasons for this transformation is that customers, suppliers, and employees are no longer in the same city but rather are in different time zones and continents. It is highly likely that in the coming decade , most project management professionals will work on virtual project teams for at least some part of their duties .

It is fair to say that, partly as a result of the evolution of virtual teams, the project management culture is undergoing a rapid and significant transformation. However, it is intriguing that, while the concept of the virtual team is a major strategic tool for enlightened and forward-looking organizations, minimal information exists concerning how to effectively nurture such a team. Since the usage of virtual project teams is increasing, and more and more people work in virtual project teams, the profession of project management will need to make appropriate adjustments in its practice as it works to formulate novel approaches to managing projects (Project Management Institute, 1999). Many of the modifications in procedures and policies deal with people issues, such as communication, conflicts, trust, and that elusive concept referred to as team spirit.

In virtual projects, as in traditional projects, teams are responsible for the work that is needed to deliver the desired product or service. A virtual team is regarded as a project-focused group, just like its traditional counterpart. Team membership might be stable, or it might change on a regular basis, again much like its traditional counterpart . Members of a virtual team may be from the same organization or from different organizations, as the circumstances warrant . The most important differentiating feature between virtual and traditional teams is that the members of virtual teams are not in a collocated environment. It is entirely possible that virtual team members will never meet, at least not in the traditional sense. Thus, the virtual project and its geographically dispersed team require processes that are different from traditional projects, in which team members are co-located.

There are two basic modes of implementing a project with a team that is located in many different locations. The first mode is to divide the project into several identifiable work packages and then assign each work package to a separate team that will design, plan, and implement that specific work package. This form of implementation is not unlike a subcontracting schema in which the general contractor simply serves as the clearinghouse and integrator, but the different components of the project are implemented and fabricated by separate teams that reside in different companies and different locations (Figure 1.2). Usually, there is a project manager for each of these work packages, particularly if these multiple teams reside in separate organizations or if the work is formally contracted to an outside organization (Figure 1.3). As a result, there could actually be four separate teams, each pursuing its own compartmentalized objective. Members of each team would probably be unaware of the expertise, and the contributions, of the members of the other teams. This implementation mode fits the description a virtual global project only partly. 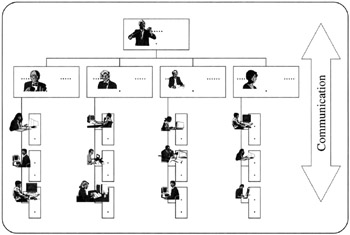 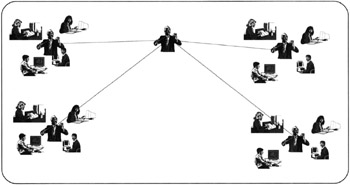 However, if the project were to be planned and implemented by a single team whose members are located in different areas, then the team fits the purist definition of a virtual team. In such a team, the task assignment is conducted on a member-by-member basis, and the resource allocation and schedule adjustments are conducted on a member-by-member basis, but across the entire project (Figure 1.4). Here, it is not necessary to have a project manager for each of the components because the team is working directly with the project manager. The important distinction is that in this model all team members work as one collective unit. In a truly virtual team, the same team member orientation is conducted for all team members. Further, team communication will extend to all team members, and all team members are collectively committed to the entire project. Under this set of circumstances, the team members will be fully aware that they are part of one single team that works collaboratively on all aspects of the project (Figure 1.5). 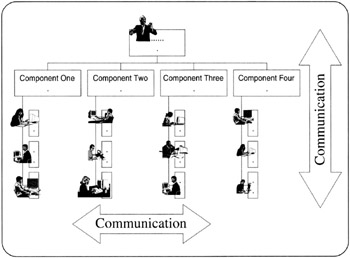 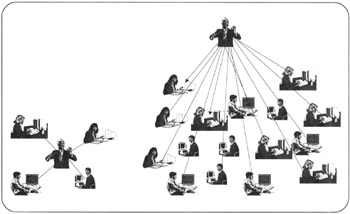