Since everyone requires a sense of complementary objectives, the team charter should state specific expectations that are to be met, collectively and individually, by the team members. These expectations should clearly indicate what the team members must do and also what the team members must not do. A lack of clarity will lead to confusion, frustration, and lack of motivational incentives. The team charter should specify the team's expectations of each project team member in terms of general behavior, respect, commitment, and openness. The team charter must highlight the specific performance expectations, such as timeliness in delivering promised outputs. It should also include the procedures for the most graceful ways to prompt a tardy participant and for identification and escalation of a conflict. These features of the team charter will subtly but surely affect the contribution of the team members to the project. The charter should include the basic ground rules for the use of e-mail for project communication. It should also include guidelines for communication modes other than e-mail, such as conference calls. The charter should prescribe the times at which conference calls should be scheduled, so that people in different time zones are not always unnecessarily burdened or surprised.

The team charter should describe how the team members should collectively plan the work, how team members should share information, how they should participate in making decisions, and how they should perform their work in concert with each other. If the work to be done is interdependent, team members should mutually agree to coordinate the related activities with due consideration to their intertwined commitments. The charter should specify any collaborative work currently under way with other organizational groups. The points of contact, and modes of contact, should be specified for those interfaces with other groups.

The charter should describe the team decision-making processes concisely and clearly so that each team member understands the process that he or she needs to follow. At times, independent decisions by one team member are appropriate, while at other times a coordinated decision, with input from several team members, is required. There are yet other occasions when a consensus decision, involving input from all team members, is more appropriate. Items to list when developing decision-making procedures include the name of the person who is accountable for the process, the names of people who are in possession of the information relevant to this decision, the names of those stakeholders that must support the decision, specific work activities that are affected by the decision, and an implementation date for the decision.

Although the concept, and even the name, kickoff has definite visual implications, a variation of it can be used to inaugurate the virtual team. The kickoff meeting, held electronically for a virtual team, could start by having each team member describe the best project in which he or she has participated. The description should include an enumeration of what might have made that particular project a success. The next step would be a similar discussion of the worst project in which each person has participated. Then, specifics must be recited as to why that project was not successful. On the basis of these experiences, lists of similarities and differences among team members' characterizations of a successful project and a marginal project can be prepared. Then, the team members should be prompted to discuss what they hope the level of sophistication of the deliverable of this project will be and what issues might become pivotal in this project.

The project kickoff meeting is a perfect opportunity to plan the project's deliverable in order to meet the client's needs and expectations and to plan the performance of the team in crafting the deliverable. The former will be the basis for the project charter, and the latter will form the basis for the team charter. Knutson (1997) refers to the team charter as the team's raison d' tre .

The kickoff meeting should set the stage for the team members to become familiar with the project's background, goals, and deliverables. Then, team members should be encouraged to share their views on what would comprise an effective team in delivering the promised output. The compilation of these views will be incorporated in the team charter and updated as the project team develops a better focus about its work.

The charter should also include a statement that indicates the commitment of each team member to the other team members and to the stakeholders. Essentially, the commitment statement is the team's code of conduct, which should become a reference document throughout the project. Additionally, each team member should list his or her general responsibilities to project stakeholders and to the customer. Then, the team members would list specific details for project planning, execution, monitoring, control, and closeout. Each team member should electronically sign the charter through an e-mail to indicate his or her symbolic support of it. When new members join the team at a later time, they too should be asked to sign the charter. Notwithstanding, these new members should be encouraged to openly express any reservations or suggestions for enhancement that they may have about this charter.

The commitment statement would affirm issues such as:

By definition, many of the elements of the project deliverable are new and unique, and as a result, project management activities may lack a clear precedence. Thus, one should expect that challenges, opportunities, problems, risks, concerns, and issues will arise throughout the life of the project. Therefore, exercising initiative is one of the common traits of project professionals in both virtual and traditional teams. The project manager's areas of initiative include primarily those that deal with project issues and enterprise issues. On the other hand, team members' areas of initiative deal primarily with interaction issues, communication issues, and task issues (Figure 3.5). Additionally, since virtual teams provide greater opportunities for delegated responsibility and shared power, the lines of demarcation become a bit blurred, much to the benefit of the overall cohesiveness of the team, which in turn results in better performance. One can imagine that the manner in which any of these issues is handled by one member will have a definite impact on other team members and ultimately on the deliverables of the project. 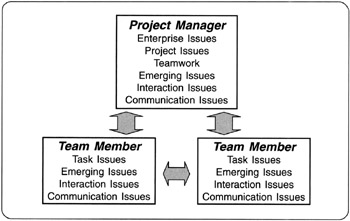 If minor issues are left unresolved , they might grow into major conflicts. The earlier an issue is identified, the sooner it will be resolved, thus avoiding the likelihood that the issue will evolve into a major area of conflict. Early recognition of issues will result in fewer surprises , which in turn will promote open and constructive discussion among team members. Early detection and resolution of issues also can reduce the uncertainty in the work environment. This uncertainty can sometimes be very unsettling for virtual team members.

The definition of conflict, in the context of project environment, is that it is a dispute, disagreement , or contention between two or more entities. The entities might be individual team members, teams, functional departments, or stakeholders (Flannes and Levin, 2001). Conflicts may occur over a variety of subjects, including schedules, budgets, resource allocation, performance, personalities, technical matters, legal and ethical concerns, coordination, loyalties, and priorities. Incidents of conflict may be substantive, involving policies, procedures, roles, responsibilities, budgets , and schedules. Conflicts may also stem from trust issues, emotional reactions , individual values, and personal preferences. Parenthetically, sometimes the latter category of conflicts might manifest itself through items in the former category. Conflicts are somewhat common in traditional projects, but they are dangerously prevalent in those virtual teams that have been formed with insufficient supporting structure. Therefore, all conflicts on any project should be addressed as early as possible.

Most people have a general instinctive tendency to avoid conflict. The premise for the avoidance is that conflict has negative repercussions and that dealing with conflict will more than likely involve unpleasant undertakings. Many also believe that by avoiding conflict, somehow it will naturally go away. However, a more enlightened and constructive approach is to view conflict as a potentially positive component of the project team experience. The team members must capitalize on the diversity that causes the conflict, avoid what is known as " groupthink ," exchange valuable insights, and forge improved working relationships. Recognizing and handling conflicts properly form the cornerstone of greater team unity.

In a virtual team interaction, one's mood and morale are less apparent than they would be in a traditional team. It is difficult to express displeasure and frustration in the virtual environment unless someone makes an effort to send a curt e-mail, in which case there would be no misinterpretation of that particular sentiment. Notwithstanding, if virtual team conflicts are allowed to remain and fester, it might result in decreased motivation and negative behavior, which may be far more difficult to resolve in the asynchronous environment. Those conflicts that might rise to the surface when two people see each other on a day-to-day basis might remain hidden in the virtual environment. Therefore, conflicts should be addressed in a proactive fashion with ample forethought in planning and with more commitment in monitoring. When there is a conflict between two or more members of a traditional team, the project manager can easily assemble the parties in a room and work with them to resolve the difference. By comparison, when such a conflict arises in a virtual team, such a direct resolution is not available, at least not by using the same techniques and procedures.

The charter should set forth formal procedures that describe how to raise a conflict, what decision-making processes to use, and how responses should be provided. The charter should also describe how one should extract a resolution from a conflict. The charter should also highlight how to escalate a conflict directly to the upper management outside of the project team without fear of reprisal. Further, the charter should include guidelines for reviewing conflicts, resolving conflicts, appealing the resolutions , and tracking the actions during the review and resolution process. Embedded in all of these procedures should be safeguards to ensure fairness and confidentiality. Finally, and most important of all, the goal of conflict resolution should not be to create a situation where one individual team member declares victory over another.

The charter should also specify the necessary steps in cases when the issue evolves into a major project conflict: