When you think of “qualitative,” think of qualifying. You are qualifying, or justifying, the seriousness of the risk for further analysis. Some PMP candidates like to remember that qualitative is a list. The “L” in qualitative and list ties the two together.

The risk management plan is the first input to qualitative risk analysis. The plan will dictate the process, the methodologies to be used, and the scoring model for identified risks. In addition to the risk management plan, the identified risks, obviously, will be needed to perform an analysis. These are the risks that will be scored and ranked based on their probability and impact. Figure 11-3 demonstrates all of the inputs to qualitative risk analysis. 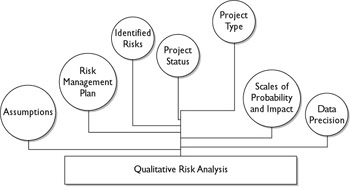 The project type also has some bearing in the process. A project that has never been done before, such as the installation of a new technology has more uncertainty than projects that have been done over and over within an organization. Recurring projects have historical information to rely on, while first-time projects have limited resources to build a risk hypothesis upon. 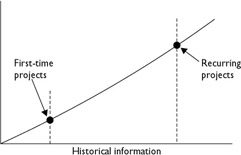 All risks are based upon some belief, proof, and data. The accuracy and source of the data must be evaluated to determine the level of confidence in the identified risks. A hunch that an element is a risk is not as reliable as measured statistics, historical information, or expert knowledge that an element is a risk. The data precision is in proportion to the reality of the risk.

Prior to the risk analysis, a pre-determined scale of probability and impact must be in place. There are multiple scales a project manager can elect to use, but generally these should be in alignment with the risk management plan. If the performing organization has a risk management model, the scale identified by the performing organization should be used. (We’ll discuss the scale values in the next section.)

A Guide to the Project Management Body of Knowledge: (Pmbok Guide,4e)

The PMP Exam: How to Pass on Your First Try, Fourth Edition