Artificial neural networks (ANNs) and genetic algorithms (GAs) were invented to mimic some of the phenomenon observed in biology. The biological metaphor for ANNs is the human brain and the biological metaphor for GAs is the evolution of a species. An ANN consists of different sets of neurons or nodes and the connections between one set of neurons to the other. Each connection between two nodes in different sets is assigned a weight which shows the strength of the connection. The connections with a positive weight are called excitatory connections and a connection with a negative weight is called an inhibitory connection. The network of neurons and their connections is called the architecture of the ANN. Let A = {N1, N2, N3}, B = { N4, N5, N6}, and C= { N7} be three sets of nodes for an ANN. The set A is called a set of input nodes, set B is called a hidden set of nodes, and set C is called a set of output nodes. The cardinality of set A is equal to the number of input variables; the cardinality of set C is equal to number of output variables. Each connection can be viewed as a mapping from either an input node to a hidden node or from a hidden node to an output node. The general architecture of three sets of nodes is called a three-layer (of nodes) ANN. Figure 1 illustrates a three-layer ANN. Notice when the property AÇBÇC=F always holds true and the network is called a feed-forward network. The connections in a feed-forward network are in one direction and the connections from A to B and from B to C are onto. The wij are the weights that denote the strength of connection from node i to node j. 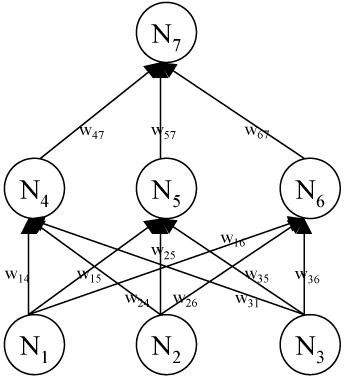 Information is processed at each node in an ANN. For example, at hidden node N4 the incoming signal vector (input) from the three nodes in the input set is multiplied by the strength of each connection and is added up. The result is passed through an activation function and the outcome is the activation for the node. If x represents the sum of the product of incoming signal vector and the strength of connection then the activation, using logistic sigmoid activation function, can be represented by,

In the back-propagation algorithm based learning, the strengths of connections are randomly chosen. Based on the initial set of randomly chosen weights, the algorithm tries to minimize the following root mean square error (RMS):

where N is number of patterns in the training set, tn is the target output of the nth pattern and on is the actual output for nth pattern. In each subsequent training step, the initial set of random connection weights (strength of connections) is adjusted towards the direction of maximum decrease of E which is scaled by a learning rate lamda. Mathematically, an old weight wold is updated to its new value wnew using following equation:

One useful property of the sigmoid function is that:

This means that the derivative (gradient) of the sigmoid function can be calculated by applying a simple multiplication and subtraction operator on the function itself. For any neuron nk, its output is determined by one of the following formulas:

where xi is the ith input (A is total number of inputs), wlik is the strength of connection from the ith input node to the kth hidden node, B is number of hidden nodes, w2ik is the strength of connection from the ith hidden node to the kth output node, and C is number of output nodes. The weights w10k and w20k are thresholding weights and x0 and h0 are both equal to one. The network is initialized with small random values for the weights, and the back-propagation learning procedure is used to update the weights as the data is iteratively presented to the input-layer neurons. At each iteration, the weights are updated by back-propagating the error as follows:

Here, η is the learning rate and yk is the actual output value.

Genetic algorithms (GAs) use survival of the fittest strategy to learn solution vector for a forecasting model. GAs are a parallel search technique that starts with a set of random potential solutions and uses special search operators (evaluation, selection, crossover, and mutation) to bias the search towards the promising solutions. At any given time, unlike any optimization approach, GA has several promising potential solutions (equal to population size) as opposed to one optimal solution. Each population member in a GA is a potential solution. A population member (P1) used to obtain solution vector for a forecasting model will consist of a set of all unknown parameters. P1 can be represented as:

The mutation operator randomly picks a gene in a surviving population member (with the probability equal to probability of mutation) and replaces it with a real random number.