Hardening Your Network with Authorization

Hardening Your Network with  Authorization

Authorization is the second step in AAA, and it is the natural progression from authentication. Authorization allows you to define what commands and processes the user is authorized to run and perform, giving you granular control over your network devices. For example, you can authorize certain users to be able to run commands in the user and privileged modes but prevent them from making any configuration changes, while granting other users full unrestricted access.

AAA authorization can be configured for the following methods :

Before you can configure authorization, you must first enable AAA on the device, configure AAA authentication, and configure the RADIUS or TACACS+ server with the appropriate users or groups as previously detailed. Let s look at how to perform EXEC and command authorization.

The first command specifies that AAA authorization should occur and defines TACACS+ as the AAA mechanism to use. If you wanted to use RADIUS, you would type radius instead of tacacs+ . The second command ensures that you must be in EXEC mode with a privilege of at least 2 to run the enable command. This is an important step, because if you do not do this, a user that is authorized at privilege level 1 can run the enable command and attempt to brute force or guess the enable secret password and thus gain access to the privileged mode of execution.

Commands authorization allows you to be even more granular than EXEC authorization by configuring the router to authorize all commands that are being run at the specified privilege level. You can define the commands that belong to a certain privilege level by running the privilege exec level < priv lvl > < command > command. For example, if you wanted to allow certain users who are configured through the AAA server to run at privilege 7 to be able to run the show interface and show version commands, you would run the following commands at the CLI:

The users will be able to run all of the privilege level 7 commands, as well as the two commands that you specified. 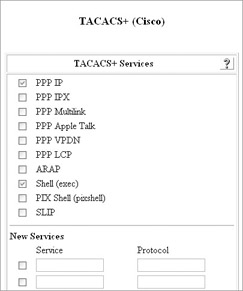 Authorization of Users Through the PIX

While authorization of users, for example to control what websites users access, is certainly able to be implemented, due to the nature of HTTP and the fact that it uses multiple connection for a single website request, in addition to the fact that a single website might have multiple IP addresses it is probably a much more feasible solution to implement content filtering, as discussed in Chapter 7. You can configure authorization (for example, for HTTP traffic) by running the following command: