Let s review the application architecture from the packaging perspective. Figure 11-1 shows what it looks like: 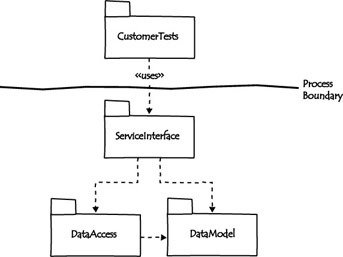 There are several packages in the application:

The programmer tests are compiled into separate assemblies from the application code so that we can choose to deploy the code with or without the tests.

We have also been putting off some cleanup for the programmer tests. We still have StubCatalogService and StubCatalogServiceFixture classes in our service.interface.tests assembly. These two classes do not add to the test coverage, and they complicate the application code.

The next step is to split the Service Interface package into two:

We will also move the related programmer test fixtures into this new namespace. The following test classes will be moved to this namespace:

Modern refactoring tools support such refactoring, and they make it much easier to handle a task like this for much larger applications, in which thousands of classes might need to be moved. However, we do not have one of those tools, so we need to do this manually. When we get everything to compile again, we rerun all the tests, and they pass.

Figure 11-2 shows what our application architecture looks like after the extraction of the Service Layer. 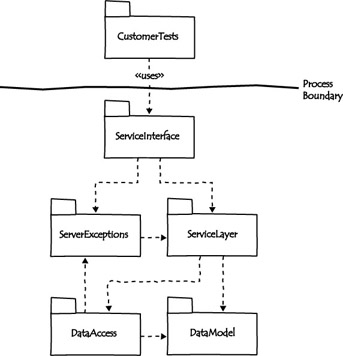