Let s outline the approach we want to take with the integration of transactions into the programmer tests. The existing tests for database access follow a similar pattern:

However, there are several tests that are not as simple. This is due in part to the need to delete the data that is inserted into the database as part of the test. Here is an example from the ReviewUpdateFixture :

We could get creative with overriding SetUp / TearDown methods in the test classes that share common test data but require slight customizations to it, but this approach is error-prone because if we forget to call the base class TearDown method, we will leave the persistent garbage in the database. We also could create separate fixtures for each test that requires a customized SetUp / TearDown method. Both of these approaches are somewhat similar, and in the end all require us to implement code to reset the database back to its initial state. Because we want a solution that lets us focus on what we are testing as opposed to worrying about writing code that resets the database, let s try a different approach.

The first part of the solution is to create a class named TransactionManager . This class will be responsible for the following:

The corresponding implementation of the TransactionManager is shown here:

The TransactionManager uses a Hashtable to maintain the one-to-one mapping between the calling thread and its associated transaction. The rest of the functionality is done by the SqlTransaction class.

Integrating TransactionManager with the Tests and Application Code

The execution of each test using transactions follows the same pattern:

Instead of writing this over and over, we will capture this pattern in a class named DatabaseFixture that will allow us to consistently enforce the pattern:

Here is a version of the ArtistFixture class modified to work with the newly created DatabaseFixture :

If you compare this code to the previous version of the ArtistFixture class (see Chapter 5), you will notice the following differences:

When we compile and run these tests, they fail because we need to make a small change in the constructor of the ArtistGateway class, which is in boldface in the following code:

We needed to associate the SQL command with the current transaction. When this code is compiled and run, the tests fail because we need to make a similar change to the IdGenerator class. After updating IdGenerator , we compile and run the tests again, and this time they all pass. To complete this part of the implementation, we need to make the same changes to the following classes: 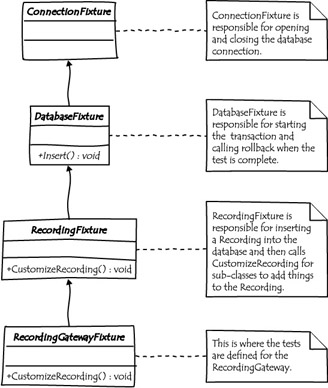 The code changes for RecordingFixture are highlighted in this code:

Finally, when we run these tests, they all fail because we did not modify the RecordingGateway to use transactions. The change we need to make to the constructor of RecordingGateway is highlighted as follows:

Now when we run the RecordingGatewayFixture tests, they all pass. We then updated the following test fixtures that also inherit from RecordingFixture :

The changes were similar to the ones that we made for the RecordingGatewayFixture . When we ran the tests, they all passed except four tests in ReviewUpdateFixture . In looking at the code, we see the big difference is that this code makes calls to the Catalog class, which also needs to be modified to know about transactions. Instead of having the four failing tests every time we run NUnit, we mark the ReviewUpdateFixture with the [Ignore] attribute. After we fix the Catalog class, we will remove the attribute and see whether we have corrected the problem.