Within a platform's representation of a thread of execution, there is typically a mechanism for the programmer to identify a particular thread and, subsequently, manipulate the thread via an identifier. With the Java platform, this mechanism is an object reference that an application holds to the thread. This reference is good only for the life of the application. The challenge in a Web Service environment, or even in a Java platform environment, is to create a mechanism for identifying a process that spans the life of an application. Web Services further this challenge to give a mechanism for identifying a process that also spans platforms and languages. 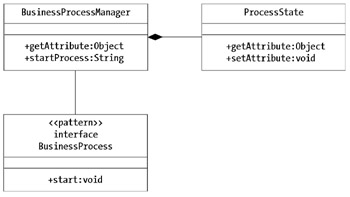 Understanding the Components of an Asynchronous Business Process

ProcessState: Instances of the business processes are transient in nature because the process has a well-defined start and termination point. However, the transience crosses application invocations instead of the normal definition of a thread of execution in a program. The ProcessState instance retains information about the specific business processes and any information that a client or server may need after a process completes. This information may also be valuable in the event that the process manager crashes or goes down for system maintenance.

A second option puts the burden of coordination of the process and attributes on the BusinessProcessManager instance. In this second case, the BusinessProcess may have event interfaces on it so that the manager can keep it in sync with the process state information in the database. In the end, there is likely a compromise. Much of the state for a business process will reside within the business process itself, and there will probably be a process state object for tracking active processes.