Imagine that your COM object has to conform to a higher-level protocol. Perhaps this protocol requires 15 interfaces formally, but your implementation can get away with implementing only 5 of them (say the other interfaces manage functionality that you and your client aren't interested in).

Figure 8-1 illustrates how tear-off interfaces work. AnotherInterfaceObj is shown in dashed lines to illustrate that it isn't created until the interface is requested. 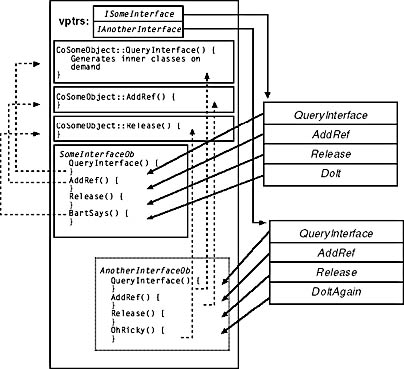 When you pump out an ATL class using the ATL COM Object Wizard, ATL applies IUnknown functions appropriate for the threading model of your class. However, even though your class derives from a class with functions that effectively implement IUnknown, that's not enough framework to give your class an IUnknown implementation. Remember that the job of IUnknown is to provide clients with an interface negotiation mechanism. In addition, IUnknown gives the class a way to handle object and server lifetime (via AddRef and Release). QueryInterface, AddRef, and Release work differently depending on whether the object is tear-off, aggregated, stand-alone, and so on. Also, the construction policy of the object varies depending on how the object is used. ATL lets you defer adding the right implementation of IUnknown until the very last minute.

To work with a creator class to the C++ COM class, you apply your class wrapped by CComObject to one of the creator classes, like this:

Then you can create instances of CSomeObject, like this:

ATL uses this _CreatorClass later on in the object map. We'll see that shortly.

We've learned that ATL includes a creator abstraction. But this still doesn't explain how ATL handles identity issues such as tear-off and aggregation. For that we need to review how ATL implements IClassFactory.

ATL provides an implementation of IClassFactory named CComClassFactory. CComClassFactory has a creation function pointer as a data member. This pointer is named m_pfnCreateInstance. The function's signature looks like this:

The function pointed to by this data member is used to create instances of classes. ATL creators are useful for building this function for use in ATL's CComClassFactory implementation of IClassFactory. Just as with MFC, ATL has macros for adding a class factory to your class. The macro is named DECLARE_CLASSFACTORY. You use it from within your class to add class factory support. Here's how the DECLARE_CLASSFACTORY macro expands:

Notice how DECLARE_CLASSFACTORY uses the CComCreator class to hide the creation process. Also notice how the macro uses the CComObjectCached class as the helper class. This helper class is similar to CComObject except that it manages a single cached object instead of creating new objects.

Implementing a tear-off interface using ATL is fairly straightforward. You simply create a tear-off class using CComTearOffObjectBase. Then you create the main class (the one with object identity) in the normal way. The tear-off magic happens within the interface map. All you need to do now is use the COM_INTERFACE_ENTRY_TEAR_OFF macro in the interface map.

The caveat with cached interfaces is that the class with object identity must implement FinalRelease and call Release on the cached IUnknown for the CComCachedTearOffObject. This decrements the tear-off's reference count and causes the cached tear-off to delete itself.

That does it for source code tear-off interfaces. Let's finish this chapter with a look at how ATL performs the cruel identity hack known as COM aggregation. 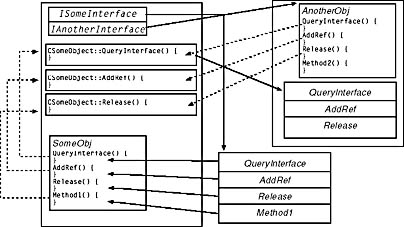 ATL adds aggregation support to your object via a simple radio button selection. When you ask the ATL COM Object Wizard to create a COM class for you, the wizard presents the dialog box shown in Figure 8-3.

You can create your COM classes as aggregatable (the default), nonaggregatable, or aggregatable-only. (They can't be created as stand-alone objects.) These radio buttons basically determine the ATL object's construction policy, which is hidden behind ATL's creators as described earlier.

The following code shows a plain-vanilla COM class produced by the Object Wizard when the aggregation radio button is checked.

Notice that DECLARE_AGGREGATABLE defines a type named _CreatorClass, which is made up of a CComCreator2 template class that uses your class type as a parameter. Listing 8-3 shows the CComCreator2 class.

CComCreator2 accepts two template parameters, class T1 and class T2. The CComCreator2 class has a CreateInstance function that accepts a pointer to a controlling unknown, an IID, and a pointer to a pointer—the regular CreateInstance signature. The CreateInstance function uses either the first or second template parameter, depending on whether the back pointer has a value. Look at the DECLARE_AGGREGATABLE macro shown above. If the class is aggregatable, the creation mechanism chooses between the regular COM creator (using the CComObject helper class) or the aggregation creator (using the CComAggObject helper class). This mixes in the correct behavior for the class factory, depending on whether the object is being created as an aggregate or as a stand-alone object.

If you use CComPolyObject instead of CComAggObject, you get a class that handles both composition options. Then you don't have to use both CComAggObject and CComObject inside your module to handle the aggregated and nonaggregated cases. This means that only one copy of the vtable and one copy of the functions exist in your module. If your vtable is large, this optimization can substantially decrease your module size. If your vtable is small, however, using CComPolyObject can result in a slightly larger module size because it's not optimized for an aggregated or nonaggregated object, as are CComAggObject and CComObject.

This macro defines a single creator class that creates CComPolyObject based on your class.

DECLARE_ONLY_AGGREGATABLE defines a _CreatorClass that fails if the object is created in stand-alone mode. The CComFailCreator class mentioned above has a CreateInstance method that simply fails—no if, ands, or buts.

DECLARE_NOT_AGGREGATABLE defines a _CreatorClass that fails if the object is created as an aggregate. With ATL, it's fairly easy to choose an aggregation policy by selecting from one of several macros. The other part of aggregation occurs within the outer object—or the class that manages the object's identity.

The outer object is the final point we'll cover in our examination of how ATL implements aggregates. The first step is getting an inner object that the outer object can aggregate to. This is really just a matter of calling CoCreateInstance in the right place. One option is to create the inner object manually in the ATL class's final constructor function and then release the object's interface pointer in the FinalRelease function, as shown here:

Using the DECLARE_GET_CONTROLLING_UNKNOWN macro declares a GetControllingUnknown function for getting a pointer to pass as the second parameter of CoCreateInstance. The DECLARE_PROTECT_FINAL_CONSTRUCT protects your object from being deleted if the internal aggregated object increments the reference count and then decrements the count to 0 during FinalConstruct.

If you want to let the inner object have at the interface request without having the outer object censor it, put the COM_INTERFACE_ENTRY_AGGREGATE_BLIND macro in your interface map:

Unlike COM_INTERFACE_ENTRY_AGGREGATE, this macro doesn't take an interface ID as a parameter. When ATL hits this entry in an interface map, ATL blindly forwards interface requests to the inner object.

If you don't want to go through the trouble of creating the inner object and you want ATL to create it for you, use the COM_INTERFACE_ENTRY_AUTOAGGREGATE macro in your interface map:

Notice that in addition to an interface ID and an unknown pointer, this macro has a third parameter that is a class ID. If the unknown pointer is NULL, ATL uses the class ID supplied to the macro to create the inner class.

To aggregate to another object in the regular way, add the COM_INTERFACE_ENTRY_AGGREGATE macro as shown here:

As long as the correct entries are in the interface map, ATL will find them when clients call QueryInterface and the client will get a pointer to the aggregated object.