To demonstrate the effectiveness of the skinning solution, I commissioned a local web design company, Circle Graphics, to create a compelling design for the www.dotnetnuke.com web site (see Figure 1-8). As an open source project, I felt that I could get away with an unorthodox, somewhat aggressive site design and I was impressed by some of Circle Graphic's futuristic, industrial concepts I had seen. 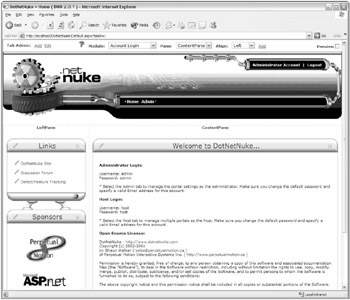 It turned out that the designer who had created these visuals had since moved on but was willing to take on a small contract as a personal favor to the owner. He created a skin that included some stunning 3-D imagery including the now infamous "nuke-gear" logo, circuit board, and plenty of twisted metallic pipes and containers. The integration with the application worked flawlessly and the community was wildly impressed with the stunning result. Coincidentally, the designer of the DotNetNuke skin, Anson Vogt, has since gone on to bigger and better things, working with rapper Eminem as the Art Director for 3-D animation on the critically acclaimed Mosh video.