Let's move from theory to practice and illustrate how the described memory structures can be abused using the FX Cisco IOS Trivial File Transfer Protocol (TFTP) server exploit (the UltimaRatioVegas exploit) as an example. This exploit is described in detail in the infamous Phrack magazine, at http://www.phrack.org/show.php?p=60&a=7 . In accordance with the SecurityFocus information ( http://www.securityfocus.com/bid/5328/exploit ), to cause an overflow we need to query a file that is longer than 700 symbols from the vulnerable router's TFTP server.

To illustrate this procedure, here's a short Perl script:

When we ran this against a test router the first time, nothing happened . Perhaps the IOS version on that router was not vulnerable?

It looks like that in accordance with the SecurityFocus advisory, the router must be exploitable, but something has gone wrong in this example. We tried it one more time, and it worked. Apparently, the advisory did not precisely formulate the vulnerability: two packets must be sent instead of one. While experimenting with the testing router, we also discovered that the length of the queried file could be less than 700 symbols. In practice, this means that the attacker must send two separate TFTP requests , with the requested file length being not less than 332 symbols.

Taking this into account, we reran the testing script. This is what we saw at the target router console:

Here's a brief summary of what happened. Since a picture is worth a thousand words, have a look at Figure 8-5, which demonstrates our data overwriting the REDZONE value. 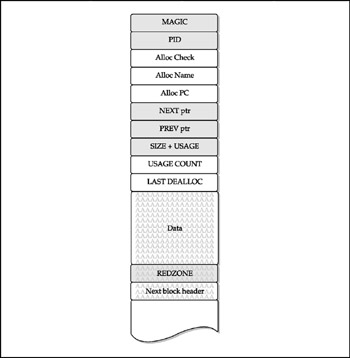 Next, we need to determine how IOS controls the block field and which processes are involved. Our earlier mention of the show processes IOS command was no accident ; take a closer look at the processes with PID 1 and PID 6:

The Chunk Manager is the process that operates with block fragments. Imagine that a process needed several small memory fragments of the same size . It will grab a memory block from an appropriate memory poll and pass it to the Chunk Manager to get the needed fragments. This saves memory, since all used fragments do not possess the block header.

One of the undocumented IOS commands (see Appendix C) allows us to find out more about Chunk Manager operation. This command is show chunk and its output is presented here:

You can see that the Chunk Manager operates with the list of fragments (chunks) similar to the way the IOS Pool Manager operates with memory blocks. However, note a significant difference: the fragments do not have headers. Since a process is likely to use fragments for storing small variables in the stack, we can hypothesize that the "stack overflowoverwrite return address on the stack" exploitation type should be possible without any sophisticated games with the IOS memory.

It is time to go back to our heap and the TFTP vulnerability. Another process shown with the preceding show processes command output is the Check Heaps process. This process was outlined by Cisco engineers in the Tech Notes ID 15102 ( http://www.cisco.com/warp/public/63/showproc_cpu.html ): "Check Heaps. Checks the memory every minute. It forces a reload if it finds processor corruption."

In plain language, this means that if during a routine check a memory block is found to be damaged, IOS will reload. Note that the check will also happen every time memory blocks are allocated or become free.

So how did FX sort out the problem of bypassing these memory checks? Let's review the existing stack protection methodnamely the canary -based techniques first. These techniques, such as the Immunix distribution StackGuard and the /GS flag in the Microsoft Visual Studio compiler, place special values on the stack. Then they try to detect stack overflows by checking to see whether these values change when they shouldn't. The IOS REDZONE can be compared to a canary word with a twist: we are dealing with heap, not stack. FX has pointed out that games with the Check Heaps process timeout (which checks memory once every minute) are not interesting. Instead, he concentrated on deceiving this process by overwriting the following block header and creating a "fake block", as illustrated in Figure 8-6. 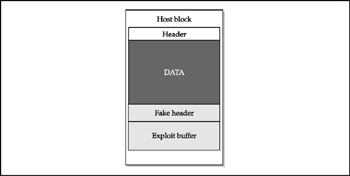 FX has also discovered that the PID and Alloc ptrs fields are not significant for memory checks. Since REDZONE and MAGIC are static values, the hardest task appears to be filling up the NEXT ptr and PREV ptr fields during the exploitation.

So what does the TFTP server process do when a request is received? First, it asks memory blocks for storing the filename from the Pool Manager. Then it frees the memory using the C free () function. The IOS takes into account that the blocks are now freed by merging the nearby blocks and updating the pointers. This process is shown in Figure 8-7. 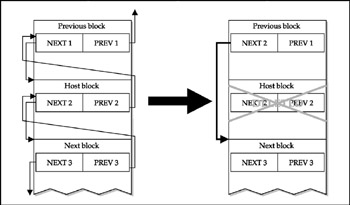 FX has described the prototype of this function in C:

Our case's similarity with both Windows and Linux is apparent. Just as in Windows or Linux, by controlling the values in both the NEXT and PREV pointers, we can overwrite any memory location accessible for writing. This exploitation method is called an uncontrolled pointer exchange . FX has found out that the PREV pointers in a freeing block are checked. Since the previous block is inspected earlier, its value can be obtained from system messages generated by the system crash. The pointers in the already freed block are not checked, and the only requirement is that they must point at some writable memory region.

So our main task is to obtain the correct values of the NEXT and PREV fields when creating the fake block. Let's see how FX has sorted out this problem. First, he found the address of the block allocated for the Process Array using the show memory processor allocating-process command output. This address is pointed at by the PREV ptr process stack, as emphasized in this output. (Please ignore the highlighted values in this code; we will discuss them soon.)

As you can see, the block we are searching for is positioned at the 0x49404 address.

In this output, you can see real-life IOS memory blocks. What presents the most interest in the output for our particular exploitation case is

The best candidate for such process is the Load Meter, a process that looks after the system load and computes the load average for different processes every 5 seconds, in accordance with http://www.cisco.com/warp/public/63/showproc_cpu.html . For a starter, let's check the Load Meter PID:

So the PID of this process is 1, or 0x0000001 in hex. In the Process Array, this PID (highlighted in the previously shown show memory 0x49404 output) points at the 0x00049C68 address (also highlighted in that output). We will follow this address:

This is a classic C calling convention: first we find the former frame pointer and then we find the return address (the pointer is highlighted on the output). The address we are looking for is 0x00049c0c. And this is our overwrite targetthe Load Meter return address.

Searching for the address the way we have described is a bit daunting, isn't it? This is why FX wrote the IOStack.pl script to read out the IOS stack return address location. You can download this script at http://www.phenoelit.de/ultimaratio/download.html . An example of its output is shown here:

The needed return address is highlighted in the output; however, as you can see, you can survive without this script especially if a previously undocumented Cisco IOS show stack command is employed to remove all these vexing steps by running it with Load Meter PID as an argument:

So the fake block is finally constructed . Note that such a methodology will not be successful in every case for a variety of reasons:

You can try to use the return address of another process, such as the IP Input mentioned in the UltimaRatioVegas exploit of FX, but even that might be unsuccessful .

This was the case when we tried this method against a Cisco 2503 router, where the whole area of the executable processes stacks was in the address space, starting from 0x00. Fortunately for crackers, this issue appeared to be specific for that particular router model and the IOS image used. However, there is another problem. The addresses of both the NEXT and PREV pointers of a used block can be dynamic even for a single selected IOS image. You can find our research devoted to the methods of bypassing this problem at the companion web site ( http://www.hackingexposedcisco.com ). There you can also find a 2500.pl script that uses an integer overflow in the NEXT pointer, described by FX in multiple presentations, which allowed us to compromise a 2500 router as long as the attacker was on the same subnet with the target.

Here we assume that the fake memory block construction went fine, and after feeding it to the router, something like this is returned:

This indicates that the shellcode time has arrived. A standard shellcode actively uses system calls or library functions to perform some port binding and provide a remote shell to the attacker. The shellcode provided by FX in his publications works only on rather ancient routers, such as the Cisco 2503 we used in our testing. FX has completely abandoned the use of IOS library functions, and IOS does not support transparent system calls.

Following is a brief summary of the algorithm used by FX's shellcode, which is likely to be of mainly historical significance nowadaysat least from the exploit developer's viewpoint:

On modern Cisco routers, it is not possible to remove write protection for NVRAM. This is why we mentioned that this shellcode would work only on ancient routers (but still quite a lot of such hosts are out thereafter all, if it works, why upgrade it?).

The main value of the reviewed research by FX is his methodology of working with IOS memory. The method based on the creation of a fake memory block is still relevant and might be used by attackers for years to come.