IPSec has the potential to modify every network communication sent to or from a computer. If that were not intimidating enough, IPSec is extremely complicated to configure. Your standard troubleshooting tools might not work either, since network traffic is usually encrypted. Therefore, you will need specialized skills to effectively troubleshoot problems with IPSec communications. This lesson covers common IPSec troubleshooting scenarios and describes how you should isolate and resolve the problems.

Regardless of the type of problem you are experiencing, you should first make sure that the necessary services are started and set to automatic on both IPSec peers. On computers running Windows Server 2003, the IPSec Services service must be started. On computers running Windows 2000, the IPSec Policy Agent service must be started.

Sometimes, especially after making significant changes, you might be able to resolve a problem by restarting IPSec services. This completely clears the IKE negotiation state. You can restart IPSec services from a command prompt by running the following commands:

This is simply a quick way to restart IPSec without restarting the computer. After restarting the IPSec services on both computers, attempt to establish a secure connection. If the problem persists, restart the operating systems on both IPSec peers and try again.

Next, verify that the correct policy has been assigned to each of the IPSec peers by using the IP Security Monitor snap-in. Remember, creating a new policy does not automatically assign it to a computer. Additionally, if you deploy a policy by using a GPO, the settings do not propagate instantly. If the policy is different from the one you were expecting, identify the responsible GPO by using the Resultant Set Of Policy snap-in or the command Netsh Ipsec Static Show Gpoassignedpolicy.

If IKE negotiation is succeeding but IPSec communications are still failing, verify that Quick Mode is succeeding by checking the Security event log and the IKE tracing log. If Quick Mode is not succeeding, check to see that all Quick Mode encryption, integrity, key strength, and key change settings are the same on both IPSec peers.

For Kerberos authentication to be successful, both IPSec peers must have valid computer accounts in trusted domains, and they must be able to authenticate the remote computers. Each IPSec peer must be able to communicate with domain controllers without having the authentication requests filtered. In earlier versions of Windows, IPSec automatically allowed Kerberos traffic. However, the Kerberos protocol is no longer a default exemption in Windows Server 2003.

To modify the default filtering behavior for Windows Server 2003, use Netsh to set the IPSecExempt value to 0, 1, or 2. By default, the IPSecExempt value is set to 3, which specifies that only Internet Security Association And Key Management Protocol (ISAKMP) traffic is exempt from IPSec filtering. Specifying a value of 2 allows Resource Reservation Setup Protocol (RSVP), Kerberos, and ISAKMP traffic. A value of 1 allows multicast traffic, broadcast traffic, and ISAKMP traffic. Specifying a value of 0 allows multicast, broadcast, RSVP, Kerberos, and ISAKMP traffic. To specify the value, run the following command:

Both IPSec peers must authenticate to each other; therefore, the problem could be authenticating either of the two computer accounts. On both computers, enable the failure Audit Logon Events audit policy, as described in Lesson 2. Attempt to initiate an IPSec connection, and then review the Security event log on both computers. You should see a failure audit event indicating the nature of the error.

If you have multiple rules in a policy, double-check that those rules will use the same authentication method consistently for any single remote computer. It is acceptable to have a policy that configures Kerberos authentication for hosts on an internal network and uses certificates for hosts on an external network. However, you cannot create one rule that uses Kerberos to authenticate just Transmission Control Protocol (TCP) data and a second rule that authenticates User Datagram Protocol (UDP) traffic by using certificates, for example. The IP Security Policy Management snap-in will not prevent you from creating these rules, but they will not work properly. All rules that apply to a single remote host must use a single authentication method.

If a certificate was obtained from Certificate Services with the option set for Strong Private Key Protection, the user must enter a PIN number to access the private key each time that the private key is used to sign data in the IKE negotiation. Because the IKE negotiation is being done in the background by a system service, there is no window available to the service to prompt the user. So certificates obtained with this option will not work for IKE authentication.

Packet filtering at firewalls is a common source of IPSec problems because IPSec cannot be permitted or blocked by applying the techniques used for most applications. First, your firewall must allow two-way traffic with a UDP destination port of 500. If the firewall is also a NAT server and you will be using Network Address Translation Traversal (NAT-T), you must also allow UDP traffic with a destination port of 4500. Second, the firewall must allow traffic with an IP protocol ID of 50, which is used by ESP. If you are using AH instead of ESP, you must allow IP protocol 51.

Network Address Translation (NAT) is a common technique for connecting a privately numbered internal network to a public network such as the Internet. As Chapter 8 discussed, earlier implementations of IPSec were not compatible with NAT. This makes sense, because NAT’s purpose is to modify the source or destination IP address in a packet without the client or server being aware, and part of IPSec’s purpose is to discard packets that have been modified in transit.

If you are having problems establishing an IPSec connection across a NAT server, first verify that both IPSec clients and the NAT servers support NAT-T. Clients using Windows 2000 or Windows XP must have update 818043 installed. (This update is available from http://support.microsoft.com/default.aspx?kbid=818043.) If you are using the built-in NAT capabilities of a computer running Windows XP or Windows 2000, or versions of Windows released prior to Windows 2000, you cannot use IPSec across NAT.

Windows Server 2003 supports IPSec NAT-T as described by version 2 of the IPSec NAT-T Internet drafts, but some applications might not work when their traffic is first protected with IPSec and then passed through a network address translator. Test how your planned implementation of IPSec interacts with network address translators in a lab before deploying IPSec in your environment.

If possible, verify that IPSec works properly between two computers on the same side of the NAT server. If problems persist, the problem might not be related to NAT-T. Verify that the NAT server is not filtering packets required by IPSec, as described in the section “Troubleshooting Firewalls, Routers, and Packet Filtering” in this lesson.

Most problems, particularly problems related to interoperating with non-Windows operating systems, can be resolved by creating the simplest policy possible instead of using the default policies. For example, when you create a new policy, use the IP Security Policy Wizard to clear the default response rule. Then, when you add new rules, choose the default This Rule Does Not Specify A Tunnel option, rather than creating a tunnel.

Next, edit the policy to remove all but a single key exchange security method. To do this, open the policy’s property sheet, and then click the General tab. Then click the Settings button, and then click the Methods button. Use the Key Exchange Security Methods dialog box to remove all but the one option that the destination will accept. For example, use the RFC 2049–required IKE security algorithms of DES, SHA1, and the Low (1) Diffie Hellman group, as shown in Figure 9.13. 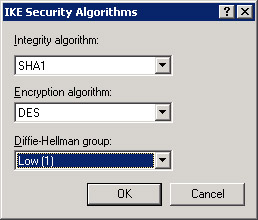 Figure 9.13: Configuring a policy to use the most common IKE security algorithms

Next, create a filter list with one mirrored filter that specifies the source My IP Address and a destination with the IP address that you are trying to establish IPSec communications with, and then configure the filter list to match only ICMP traffic. Create a new filter action to negotiate security by using only one security method. For example, use the RFC 2049–required set of parameters, such as format ESP using Data Encryption Standard (DES) with SHA1, with no lifetimes specified. Make sure both the Use Session Key Perfect Forward Secrecy and Allow Unsecured Communication With Non-IPSec- Aware Computers check boxes are cleared. Use an authentication method of preshared keys for the rule, and make sure there are no white spaces in the string of characters. The destination must use exactly the same preshared key. Then configure the destination with the same configuration, but reverse the source and destination IP addresses.

When you are able to establish an IPSec connection using the lowest possible settings, begin to change the settings one at a time to match your security standards. Test IPSec after each change. When the IPSec connection fails, you will have identified the source of the problem. Then you can choose to either leave that setting at the compatible— but potentially less secure—setting, or you can work with the software vendors to improve interoperability between the IPSec implementations.

The following question is intended to reinforce key information presented in this lesson. If you are unable to answer a question, review the lesson materials and try the question again. You can find answers to the questions in the “Questions and Answers” section at the end of this chapter.