There are now five basic components to Acrobat technology:

Acrobat technology, like most other Adobe products, is also extensible and supports a variety of Adobe and third-party plug-in technologies.

Acrobat Distiller is the application used to convert a native file document, such as an InDesign or QuarkXPress document, into a PDF document. In order for Distiller to work its conversion magic, you must convert the original document file into a PostScript file that contains PostScript language code (described later in this chapter). This conversion is done with a PostScript printer driver. Distiller then converts the PostScript code into a PDF document file. This process is known as distilling (and is sometimes referred to as normalization ) and creates the viewable and editable version of the PostScript file that you and I recognize as a PDF file.

Acrobat Elements is a new application released with Acrobat 6. Elements is basically an easy-to-use version of Distiller, a Distiller Lite if you will. Elements is designed to be used in corporate environments where individual, strict control over distilling variables and characteristics may not be as important as, say, a prepress environment. This is currently a site-licensed product with the smallest license available being 1000 seats. I suspect that the initial distribution of this product will be limited due to the large seat requirement and that we may well see a modification of this policy in the future.

The Portable Document Format (PDF) file is of course the heart of Acrobat technology. PDF is a PostScript-based format designed to be platform-, application-, and version-independent. Its core function has always been universal document distribution, although many more spectacular capabilities have been added and improved upon over the years , including forms, multimedia, and collaborative publishing.

It is important to note that the basic PDF file was intended for, and the default settings are set for, low-resolution , on-screen, composite viewing and printing. So if you are intending to use a PDF for another purpose ”such as high-resolution, color -separated, PostScript commercial printing ”you need to be prepared to steer the PDF away from its default uses and settings and toward the specific demands of those uses.

This is the application formally known as Acrobat Reader (I prefer the original name as it is more specific). Adobe Reader is a free application distributed by Adobe. Reader is made for basic viewing, searching, and printing of PDF files and does not provide more advanced functions, such as document page manipulations, editing, and collaborative publishing, or the addition of interactive or multimedia functions. Most of these capabilities can be viewed in Reader but not created or edited. The free nature of Adobe Reader has been largely responsible for the rapid and wide proliferation , acceptance, and adoption of PDF-based technologies. However, most people who adopt Acrobat technology and PDF into their standard workflow will not be satisfied with Reader; they will want to acquire Acrobat itself with all of its wonderful capabilities.

Acrobat provides the same basic viewing and printing functions as Reader but includes a whole variety of PDF manipulation, management, and editing capabilities, such as document page manipulation, editing, collaborative publishing, or the addition of interactive or multimedia functions. Historically, Acrobat has been available in only one form. Starting with Acrobat 6, there are now two flavors known as package options : Acrobat Standard and Acrobat Professional.

It would be incorrect to think of Acrobat Standa rd as Acrobat Lite, because it is anything but a light version (Acrobat Professional is more of an enhanced version). Both Standard and Professional versions arrive with Distiller. Standard supports all the basic tools that Acrobat has to offer:

Most business users will find that the Standard version will meet all of their needs.

Acrobat Professional contains all of the Acrobat Standard document management, editing, and manipulation features. In addition, Professional supports a range of functions that Adobe considers to be more professional tools for graphic artists , prepress, and engineering professionals, such as these:

Acrobat technologies are expandable through the use of plug-ins, which add capabilities to the applications. Currently most plug-ins are created for either Reader or for Acrobat Standard or Professional, with the Acrobat versions having the lion s share of them. The plug-ins are normally stored in a Plug-ins folder associated with the specific application.

You can find a list of the plug-ins under either the Application or File menu, depending upon which operating system you are using. Figure 1.2 shows one of the plug-in lists in Acrobat Professional (available by choosing the About Adobe Plug-Ins or About Third-Party Plug-Ins menu option). When you view the list of plug-ins, Acrobat will in most cases provide an explanation of the use of each plug-in and a list of other plug-ins that may be required for the fully functional use of that plug-in. 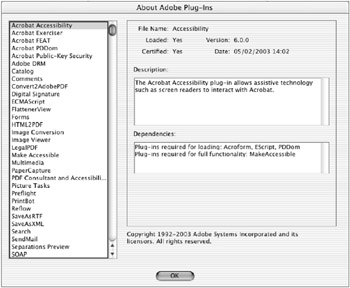 The third-party plug-in capability allows other manufacturers to further enhance Acrobat technology. An example is Enfocus PitStop, which provides robust preflight and editing capabilities to Acrobat. We will cover this plug-in and its use in Chapter 11, Input and Output of PDF Documents and Contents.