Viewing the Base Schema

To view the base schema in Windows 2000, you must first install the Active Directory Schema snap-in, which is available only after you install all of the Windows 2000 administration tools. After installing the administration tools, you need to add the snap-in to Microsoft Management Console (MMC) by using the Add/Remove Snap-in dialog box accessible from the Console menu. You can then access the Active Directory Schema snap-in using the MMC.

Because of the serious consequences of modifying the schema, the schema is set for read-only access by default. If you decide to follow along with this lesson by opening the Active Directory Schema snap-in, verify with your administrator that schema modification has not been enabled.

After you open the Classes folder in the Active Directory Schema snap-in, you can scroll through the list of schema class objects, shown partially in Figure 3.3 and included in its entirety on the Supplemental Course Materials CD-ROM. Each class has a name, type, and description. The type—abstract, auxiliary, or structural— is used to create the hierarchical structure of the schema class objects. 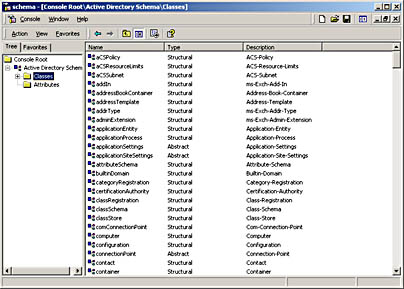 An abstract class provides a basic definition of a class that can be used to form structural classes. An auxiliary class is used to group schema attributes that you want to apply as a group to a structural class. It can be used to extend the definition of a class that inherits from it, but cannot be used to form a class by itself. Structural classes use a hierarchy that begins with an object class called top. All schema class objects of structural type are descendants of top and inherit the attributes of top. The example in Figure 3.4 shows how the user class inherits sample attributes from its parent classes, organizationalPerson, person, and top. It also inherits sample attributes from its auxiliary classes, mailRecipient and securityPrincipal. You can view the parent class and auxiliary classes for a schema class object on the Relationship tab in the Properties dialog box for the class object. If you want to create a new class in the schema, the classSchema class object defines which objects are required and which are optional. 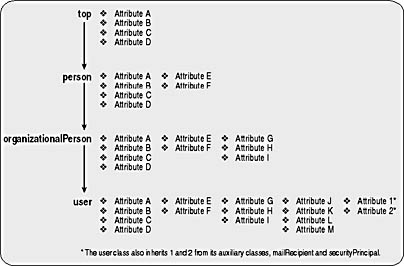 After you open the Attributes folder in the Active Directory Schema snap-in, you can scroll through the list of schema attribute objects, as shown partially in Figure 3.5 and listed in its entirety on the Supplemental Course Materials CD-ROM. Each attribute has a name, syntax, and description. The syntax indicates the format of the attribute. If you want to create a new attribute in the schema, the attributeSchema class object defines which attributes are required and which are optional. 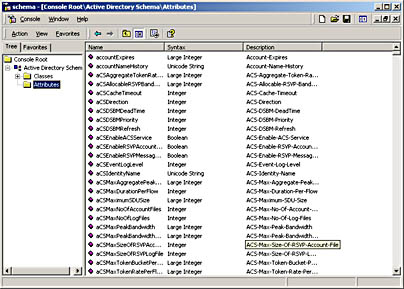 The Schema Admins predefined universal group is the only group authorized to make changes to the Active Directory schema. However, the members of the Schema Admins group are determined by members of the Local Admins, Domain Admins, and Enterprise Admins groups in the forest root domain. To effectively control who can modify the schema, you should monitor the membership of these groups and restrict membership if necessary by using group policy.

To plan schema modifications for your organization, you must complete the following tasks:

The Schema Modification Policy Worksheet has been created to assist you in setting up a schema modification policy for your organization. The following is an example of a completed worksheet for the fictitious A. Datum Company.

A blank copy of the Schema Modification Policy worksheet is located on the Supplemental Course Materials CD-ROM (\chapt03\worksheets\SchemaMod).

To determine whether you need to plan schema modifications for your organization, you must identify all the data that the organization needs to store in the Active Directory database. To do this, you should consult the business and technical environment analysis documents compiled earlier by your design team. In addition, you should also consider whether changes currently planned to address growth and flexibility needs and any other changes that would help meet the ideal design specifications for the organization would require schema modifications.

Determining Whether to Modify the Schema

The following modifications can be made to the schema:

Reasons to Modify the Schema

Although you should avoid modifying the schema for your organization, there are some situations that may warrant schema modification. You may need to modify the schema if any of the following are true:

Implications of Modifying the Schema

Modifying the schema affects the entire forest. When determining whether to modify the schema, consider how schema modification affects the following:

To design a schema modification plan

The following example describes planning schema modifications at the fictitious A. Datum Company.

While gathering information for the Active Directory infrastructure plan, the design team at the A. Datum Company learns that the management of the human resources department for one of its clients (forests) would like to include the languages spoken by its users in the directory. Currently, there is no attribute in the user schema object class that can handle languages spoken, so the design team is considering planning a schema modification. To plan a schema modification, the A. Datum Corporation's schema modification policy requires the team to do the following:

Kanban Made Simple: Demystifying and Applying Toyotas Legendary Manufacturing Process
Making Sense of Change Management: A Complete Guide to the Models, Tools and Techniques of Organizational Change
Wireless Hacks: Tips & Tools for Building, Extending, and Securing Your Network
After Effects and Photoshop: Animation and Production Effects for DV and Film, Second Edition
Lean Six Sigma for Service : How to Use Lean Speed and Six Sigma Quality to Improve Services and Transactions
DNS & BIND Cookbook
flylib.com © 2008-2017.
If you may any questions please contact us: flylib@qtcs.net
Privacy policy
This website uses cookies. Click here to find out more.
Accept cookies