Harvesting the Crumbs of the Internet

Harvesting the Crumbs of the Internet

Wherever you travel on the Internet, whatever you say and whatever you do leaves a trail; a breadcrumb trail of facts, reply addresses, Internet Protocol (IP) addresses, names, and dates. The Internet, now littered with this information, has become an old dusty house with millions of random facts and traces left in the corners of cyberspace.

This information contains far too much detail for its own good. What’s more, it is easily accessible by anyone on the Internet, and searchable with common Internet search engines. Spammers caught onto this fact in the late 1990s and a technique known as harvesting was born. Harvesting was one of the first methods used to find new e-mail contacts. The idea is simple: search newsgroups, mailing lists, and bulletin boards for posts containing the sender’s and recipient’s e-mail addresses. As you can see in Figure 4.2, it’s easy to find. Harvesting millions of e-mails at a time, the early pioneers of spam could obtain large e-mail distribution lists quickly and simply by sifting through the cookie crumb trail of facts. 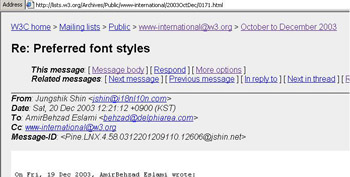 Software was soon developed to take full advantage of this information, and today there are dozens of Web, Internet Messenger, and newsgroup “harvester” applications in production. These programs scan millions of messages, posts, and contacts, searching and harvesting any e-mail addresses found within. Ideal Web sites to harvest would be a directory or a Web-based “yellow pages.” These online e-mail databases allow spammers to quickly harvest millions of legitimate accounts. Often, spammers write their own custom harvester programs, designed to quickly pillage new applications such as peer to peer (P2P) networks, online game servers, and new searchable online address books.

In the early days of the Internet, a popular method of talking to many people was using the Network News Transfer Protocol (NNTP) boards, which were much like the Web-based bulletin boards of today but were primitive and lacked any privacy measures. Unlike the bulletin boards of today that hide e-mail addresses from prying eyes, NTTP will clearly show senders’ e-mail address and often their IP. This information is visible to anyone with access to the NTTP server. An example of these older NTTP boards is shown in Figure 4.3. 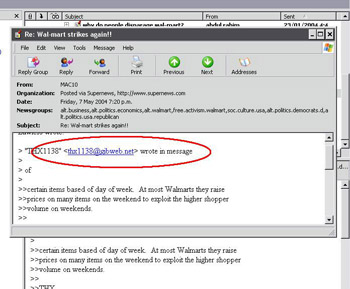 As you can see, the e-mail address is clearly visible. To build a quick contact list you would simply scan the entire NNTP server and collect the e-mail addresses in each message. NNTP harvesting is a very popular harvesting method that is still used today, and is seen in Figure 4.4.

The sudden interest in e-mail harvesting caused the Internet to become very conscious of the information it disclosed, and people began reducing the amount of information they gave out.

The early methods of spam were quick, easy, and highly untargeted. You could harvest a million e-mail addresses and still have no idea about the users’ likes or dislikes, so selling a product to them was much harder. It was all about luck; send as much e-mail as possible to as many people as possible, and hope that they buy your product.

This crude method worked well in the early days of spam, when the world was new to the idea of unsolicited e-mail and people were easily swayed by slick offers. However, as time passed and spam became more unpopular and thus ignored, harvesting became a very unsuccessful method of obtaining new e-mail contacts. Sure, people still bought the product but the percentages of those people were as low as 0.001 percent.

Now a spammer had to send many millions of messages just to break even financially. For some spammers, they dislike the idea of harvesting e-mails, as it provides a highly untargeted user base and you usually end up sending spam to people who not only do not want spam, but also have no interest in buying the advertised product. For them, quality, not quantity, is very important when dealing with mailing lists.

Internet Relay Chat (IRC) is a popular chat network used worldwide. Clients connect to an IRC server and then join channels and discuss random topics. IRC is very popular with younger Internet users and offers a much richer talking experience, allowing users to talk to many large chat rooms filled with like-minded users. However, IRC is also known for leaking information using the identification (IDENT) protocol. IDENT is an original UNIX-based protocol that, when asked, shows the user currently running the IRC client. For example:

Here we can see that the nickname _Wrillge is actually xxxxx who is using BitchX (a UNIX-based IRC client) on a UNIX server at Stanford University.

There is a good chance that user xxxxx@box21.stanford.edu is a valid e-mail account, but it will require the server to be running an e-mail daemon.

This method, although easy, is highly unpredictable. The majority of people who use IRC are Windows-based clients, who are not usually running an e-mail server and are using a home Digital Subscriber Line (DSL) connection. For example:

Harvesting e-mail accounts from IRC was one of the earliest methods used and is obviously not very accurate. Still, it can produce some valid e-mail addresses, mostly collecting users running IRC from UNIX-based computers, which have sendmail and IDENT installed and are running by default. However, these e-mail addresses may not be the user’s primary addresses and thus may not even be checked. In fact, the users may not even be aware that they are running an e-mail daemon. This decreases the usability of the e-mails greatly; a spammer should not expect a wondrous return by collecting e-mails from IRC.

When you register a new domain, you are required to enter personal details to assist the billing and technical responsibilities of the domain. These details include phone number, address, and e-mail address. (For this example, the real name and contact information has been replaced with “X’s.”) For example:

Spammers love anything that requires you to enter your e-mail address, and sure enough, many spammers actively harvest contacts from the whois database.

By using the UNIX tool whois database one can easily see who is listed as the administrative contact; this is a valid address and is probably active right now.

There are applications that were developed to harvest contact details from the whois database. One such application is whois extractor (see Figure 4.5). Developed by www.bestextractor.com, its design lets you quickly enumerate name, phone number, and e-mail address for both the technical and administrative contact for any domain currently active. 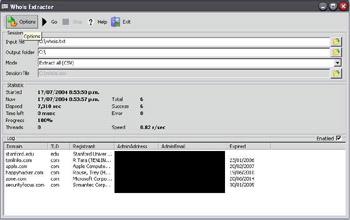 Although these are legitimate e-mails and more than likely currently active, the majority of the users are probably not interested in buying erectile dysfunction medication or investing in a new home loan. Their worth is much less than that of a direct opt-in list because they lack targeting; the only common interest these e-mails share is that they have all bought a DNS name. So, perhaps spamming a DNS sign-up program just before the domain expires is not such a bad idea.

How often do you receive an e-mail offering to sell you 100 million e-mails for use in bulk e-mailing or direct e-mail marketing?

The number of e-mails are staggering; at least 100 million verified e-mail addresses for around $100.00. That works out to 0.000001 cents per e-mail address, and is by far cheaper than buying from another spammer or hacker where you may only get one or two million e-mails for the same price.

Usually, bulk mailing-list companies are run by ex-spammers or hackers, are often run anonymously out of an offshore P.O. box tax free, and in general are very discreet operations. Even though bulk mailing list companies often keep their word and sell you 100 million e-mail addresses, the usability of the e-mails is often very poor. The majority of the e-mails originate from other well-used mailing lists. Furthermore, large amounts of the addresses originate from harvested public Web sites. This means that the e-mail addresses have been receiving spam for a long time, and by now are either running very strict spam filtering software or are very sick of receiving spam and are likely trashing the messages without opening them.

Some companies offer targeted bulk mailing lists with offers such as “100 million guaranteed American addresses” and “290 million married older men.” The prices are almost ten times higher than the untargeted lists, with an average price of 0.0001 cent for each e-mail address.

These lists promise a more targeted approach and a younger group of users, ensuring that the user is not already sick of receiving spam. The majority of these companies obtain their lists through hackers, spackers, and insiders, buying any personal demographics and customer contact lists that are for sale.

Tricks of the Trade…The Great Circle of Spam

You may notice a trend around the amount of spam you receive. Some weeks you may receive one or two messages a day, other weeks up to 100 per day, and then back to one or two the following week. This trend is mostly due to companies selling bulk e-mail lists. Your e-mail address was probably harvested, sold, collected, or stolen and is now part of a large bulk mailing list along with hundreds of millions of others.

When the list is sold to a new spammer you will receive more spam. For a week or two you will be bombarded with many offers from that particular spammer. Once the spammer finds little or no revenue left in the e-mail addresses they will stop spamming them and probably sell the list it to another spammer for $5.00, at which point you will start receiving new types of spam from a new spammer. This trend creates what I call “The Great Circle of Spam;” a predictable and mapable lifecycle showing the spread and growth of spam to your e-mail account.