Windows utilizes several types of file systems that support both client and server operations. Most client OSs only need to support fundamental volume and file allocation functions. This is handled through its ability to initialize and partition volumes with formatting and file allocation through a simple file allocation table. However, within server products, a more robust file system is required, as shown in Figure 8-2. Windows server products provide a NT File System (NTFS), which provides a robust file system that supports enhanced volume and file allocation functions. These products include volume fault resiliency features for partitioning volumes with redundancy features, thus providing a subset of RAID features through software. Also supported is recoverability through logging functions. Enhanced security attributes are provided to support multiuser environments with levels of data protection for both user access and file and volume protection. 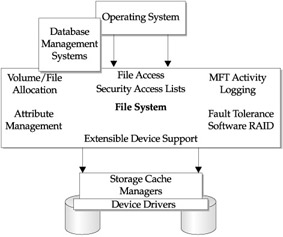 Access to information via the Internet and through World Wide Web interfaces has produced yet another variant of the file system, the Hyper Text Transport Protocol, or HTTP. Although more of a common file access protocol, it does define a file structure within the web-based environments depicted in Figure 8-3. Because it is supported across both UNIX and Windows, it provides a common protocol for accessing files through a network. 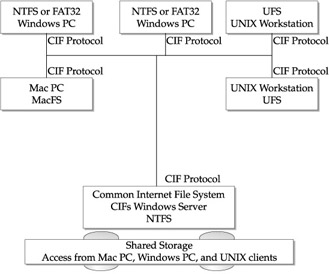 Another advancement in common file protocols is the Common Internet File System (CIFS), as shown in Figure 8-4. Starting as a Microsoft initiative, it has now become an open standard. Based on the need to provide file sharing among a diverse set of operating system environments within a network setting, it is a model derivative of NFS that allows Microsoft Operating Systems to access shared files on Microsoft servers, UNIX servers, the Web, and most recently, Apple servers. CIFSs are based on a Microsoft networking protocol of Server Message Block (SMB), and have both advantages and limitations compared to NFS. 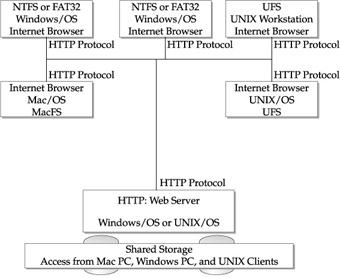 Other file systems are generally derivatives of UNIX variants and are used for specialized applications, such as scientific and academic/research applications. However, one alternative system (as shown in Figure 8-5) has produced a new type of access, especially within networked environments. This is the Direct Access File System, or DAFS. DAFS can be especially important given its use of Direct Memory Access (DMA) functions for transferring data. Future DAFS products will have extremely fast access times given their capability to transfer data between memory locations. 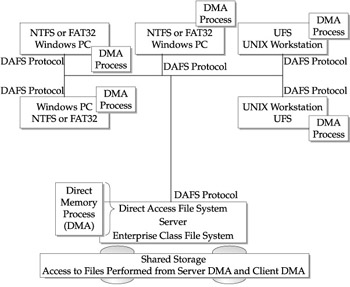 The importance of file systems as they relate to storage systems and infrastructures is straightforward and should not be overlooked. As you encounter more detailed discussions in Parts III and IV regarding NAS and SAN, we will discover another dimension to the importance of file systems and their capability to operate within storage networked environments. As you may have already discovered , NFS, CIFs, and HTTP all play a big role in these environments.