It's a network it's a bus no, it's Fibre Channel. Fibre Channel is a layered connectivity standard that has the characteristics of a bus, the flexibility of a network, and the scalability potential of MIMD (multi-instruction multidata) configurations. In implementation, it uses a serial connectivity scheme that allows for the highest level bandwidth of any connectivity solution available today. This architecture allows for implementations to reach a burst rate as high as 200 MBps for I/O operations, with aggregate rates depending on workload and network latency considerations. Regardless of the latency issues, this is a tremendous enhancement to throughput over traditional bus connectivity.

To say that Fibre Channel is a network architecture or that Fibre Channel is a serial bus connectivity standard is an exercise for the esoteric debating society. Discussion here will result in nothing more than a last word at the science club meeting. In all fairness to the innovations surrounding Fibre Channel (FC), it was designed incorporating the characteristics of both to meet the growing scalability requirements of computer connections. It has accomplished this task in particular with storage systems.

The FC standard is implemented using a layered protocol consisting of five levels. As depicted in Figure 7-7, the first three levels deal with the physical attributes. As shown here, these are FC-0 through FC-2. These layers control the lowest level operations, from media types supported, to signal encoding for transmission, to the encapsulation and transmission control functions. FC-3 through FC-4 provide attributes for common services and mapping to other protocols. The most popular so far being the SCSI and IP mappings that support storage system operation and remote linking to IP networks. 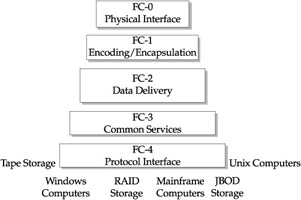 FC can be implemented through three different topologies, as indicated in Figures 7-8, 7-9, and 7-10. These range from the most simple, point-to-point configurations, to the more complex, albeit more powerful, fabric implementation. The Fibre Channel Arbitrated Loop (FC-AL) topologies have served as a transitional move as FC storage systems moved from FC Hub configurations, where the FC-AL provided access to the bandwidth benefits of the protocol; however, the loop arbitration overhead sacrificed most of these enhancements. 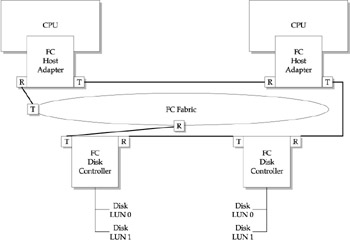 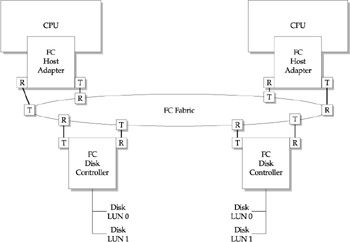 FC operates on a serial link design and uses a packet type of approach for encapsulation of the user data. FC transmits and receives these data packets through the node participants within the fabric. Figure 7-11 shows a simplified view of the FC fabric transmission from server node to storage node. The packets shipped by FC are called frames and are made up of header information that include addresses, user data (encapsulating an incredible 2,192 bytes per frame), and error recovery code (ERC) information. 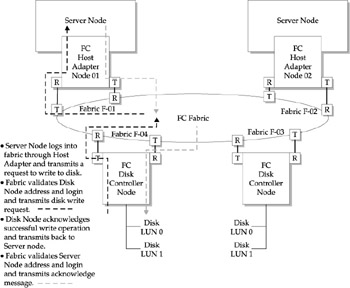 Each device that uses the FC Fabric is a node. FC provides both flow control and addressing for nodes when they contact and log in to the fabric, as illustrated in Figure 7-11 where Node 01 is assigned the port address of N01-fabric1. This is the N-Port address for the external device, in this case a Host Adapter for a server. This is connected to Fabric port F-01 of the switch's fabric (in other words, the fabric switch with an address of F01-fabric1 is shown as a fabric port). The storage system is connected using the same pattern.

The devices are controlled using calculations of available buffer space within each device as well as knowledge of time sequences, thereby keeping frame overflows to a minimum. Finally, the fabric itself executes under a predefined and supported class of service. Of these classes, only two are appropriate for typical storage systems: Class 2 and Class 3. These define a network connectionless service this way: acknowledgement of transmission is designated as Class 2; no notification of transmission is displayed as Class 3.