Ever since the introduction of the multitasking processor, operating systems have been able to handle running multiple programs at once using the new task switching and segmentation features provided by the CPU. These new technologies made it possible for operating systems such as Windows to be created. Even though PCs today are able to multitask, they still really can do only one thing at a time. In order for the operating system to support running dozens of applications at once, it has to slice up all the available processing time and give each application a turn. Although this is starting to change now with the introduction of multi-core processors, each core can still do only one thing at a time.

Operating systems use a variety of techniques to determine which application will get the next available slot to use the CPU. One of the factors that determine this for Windows Vista is the priority level at which the application is running.

As you can see, the priority you give an application can affect how fast the program runs.

Windows Task Manager is something that everyone experiences when they have problems with a frozen program. However, you learned that Task Manager is a very useful utility in Chapter 8. Another use of Task Manager is to change the priority at which an application is running. This capability can be very useful when you have a lot of programs running on your computer.

If you have an application that has a high need for CPU operations such as rendering a video clip or a game, you can adjust the priority of the application by following these steps: 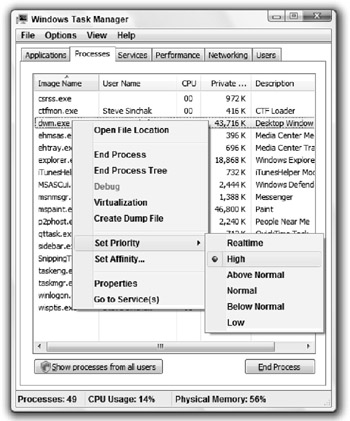 Using Task Manager to change the priority levels is great. However, there is one downside. When an application on which you have altered the priority level is closed, the priority level it was running at will be lost. The next time that the program is started, the program will be running back at the default level. This downside can be a pain in the butt for some users; however, a cool trick will fix this problem, as discussed in the next section.

For the sake of demonstrating how to use the command, assume that the Calculator is set at high CPU priority. Follow these steps to set the command:

Now that you have created the batch command file, you are ready to start your new shortcut.

The same technique can be applied to any program on your computer. Instead of typing calc.exe at the end of the command, type the name of the executable of the program that you want to start.

Additionally, this command can be used on nonexecutable files such as documents. For example, you can type start /high mydocument.doc to start Microsoft Word in the High priority level with your document opened.

Using WinTasks to profile your priorities

Another great utility, made by Uniblue, is called WinTasks Pro. This utility is like Windows Task Manager, but on steroids. It offers tons of new features that Windows Task Manager does not have, such as the ability to see individual CPU and memory graphs for each application, scripting capabilities that allow the user to set up triggers based on CPU and memory activity for each application, and most important, the ability to have preset profiles for application priority levels. In addition to these features, it has built-in information about quite a few commonly known processes to help users figure out each process that is listed because they are often not easily identified by the process name.

Having a profile for your open application priority levels enables you to automatically change the priority of several applications at the click of a button.

WinTasks 5 Professional can be downloaded from http://www.liutilities.com/products/trial/. Download a copy now and install it if you would like to follow along with these steps, which guide you through creating a profile of your priorities:

Now that you have multiple presets of application priority levels, you can easily switch between them by clicking the buttons.

The capability to create separate presets of priority levels for different applications allows you to optimize certain programs, depending on what you are doing. For example, you can create a profile for your processes when you want to play a game. To do that, you can decrease the priority of many of the system processes and applications running in the background so that a game running at normal or higher priority will have more CPU time.