This lesson provides a summary of several of the lesser, yet most commonly used, protocols.

Most of the services and applications that run within the Windows operating system use the NetBIOS interface or interprocess communication (IPC). NetBIOS was developed on LANs and has evolved into a standard interface for applications to use to access networking protocols in the transport layer for both connection-oriented and nonconnection-oriented communications. NetBIOS interfaces exist for NetBEUI, NWLink, and TCP/IP. NetBIOS requires an IP address and a NetBIOS name to uniquely identify a computer.

Originally, IBM offered NetBIOS as a separate product, implemented as a terminate-and-stay-resident (TSR) program. This TSR program is now obsolete; if you should encounter one of these systems, you should replace it with the Windows NetBIOS interface.

NetBEUI is the acronym for NetBIOS Extended User Interface. Originally, NetBIOS and NetBEUI were tightly tied together and considered one protocol. However, several network manufacturers separated out NetBIOS, the session-layer protocol, so that it could be used with other routable transport protocols. NetBIOS (network basic input/output system) is an IBM session-layer LAN interface that acts as an application interface to the network. NetBIOS provides the tools for a program to establish a session with another program over the network and, because so many application programs support it, it is very popular.

NetBEUI is a small, fast, and efficient transport-layer protocol that is supplied with all Microsoft network products. It has been available since the mid-1980s and was supplied with the first networking product from Microsoft: MS-NET.

Advantages of NetBEUI include its small stack size (important for computers running MS-DOS), its speed of data transfer on the network medium, and its compatibility with all Microsoft-based networks.

The major disadvantage of NetBEUI is that it does not support routing. It is also limited to Microsoft-based networks. NetBEUI is a good and economical solution for a small peer-to-peer network where all workstations use Microsoft operating systems.

A set of WAN protocols, X.25 is incorporated in a packet-switching network made up of switching services. The switching services were originally established to connect remote terminals to mainframe host systems. The network breaks up each transmission into multiple packets and places them on the network. The pathway between nodes is a virtual circuit that looks like a single, continuous, logical connection to the upper layers. Each packet can take different routes from the source to the destination. After the packets arrive, they are reassembled into their original data message.

A typical packet includes 128 bytes of data; however, the source and destination can negotiate a different packet size after making the virtual connection. The X.25 protocol can support a theoretical maximum of 4095 concurrent virtual circuits across a physical link between a node and the X.25 network. Typical data-transmission speed for X.25 is 64 Kbps.

The X.25 protocol works in the physical, data-link and network layers of the OSI reference model. It has been around since the mid-1970s and has been well debugged; therefore, it is a stable network environment. It does, however, have two shortcomings:

X.25 and TCP/IP are similar in that they both use packet-switched protocols. However, there are several differences between the two:

Xerox developed Xerox Network System (XNS) for its Ethernet LANs. XNS became widely used in the 1980s, but has been slowly replaced by TCP/IP. It is a large, slow protocol, but produces more broadcasts, causing more network traffic.

Figure 6.6 shows a typical AppleTalk network including an Ethernet connection. 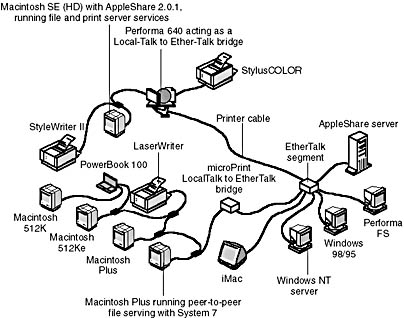 DECnet is Digital Equipment Corporation's proprietary protocol stack. It is a set of hardware and software products that implement the Digital Network Architecture (DNA). It defines communication networks over Ethernet LANs, Fiber Distributed Data Interface metropolitan area networks (FDDI MANs), and WANs that use private or public data-transmission facilities. DECnet can also use TCP/IP and OSI protocols as well as its own protocols. It is a routable protocol.

DECnet has been updated several times; each update is called a "phase." The current revision is DECnet Phase V, and the protocols used are both proprietary to Digital and offer a fairly complete implementation of the OSI protocol suite.

Along with the better-known protocols, many other lesser, but still common, protocols exist. Five such protocols are listed below. In this exercise, you will be matching each of the protocols in the list that follows with the feature that describes what it does.

In each blank space on the left, fill in the letter of the protocol that uses the feature listed on the right. Note that more than one protocol can be matched to a particular feature.