We have taken a look at the principal network operating systems from Novell and Microsoft. We have also briefly surveyed Apple, Banyan Vines, and UNIX systems. Typically, NOSs have to integrate hardware and software products manufactured by different vendors. This lesson presents an overview of the issues and problems involved in implementing a multivendor network.

Most networks today exist in multivendor environments. While such networks can pose challenges, they work well when properly planned and implemented.

The character of a network changes when software components manufactured by different vendors must operate on the same network. Problems can arise when the network is running more than one type of network operating system.

In order for a network to function properly in a heterogeneous computing environment, the server's operating system, the client's operating system, and the redirector must all be compatible. In a multivendor environment, it is necessary to find a common language in which all computers can communicate. For example, in the network shown in Figure 4.6, a Windows NT server is supporting three clients: one computer is running Microsoft Windows 95, another is running UNIX, and a third is running AppleTalk. 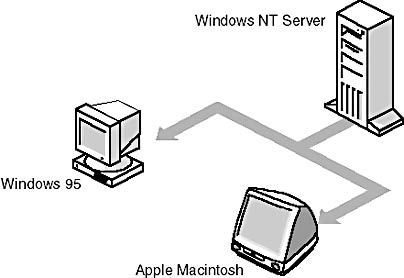 In the example shown in Figure 4.7, a Windows NT client needs to access a Novell server. To accomplish this, the network administrator loads the Microsoft redirector for accessing Novell servers on top of Windows NT, installed in the client.

The second way to implement communication between a client and a server is to install communication services on the server, an approach used to bring an Apple Macintosh into a Windows NT environment. Microsoft supplies Services for Macintosh, software that allows a Windows NT Server-based server to communicate with the Apple client. 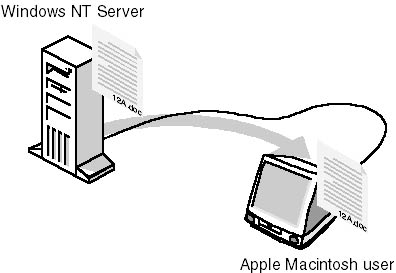 Thanks to this interoperability, a Macintosh user can follow standard Macintosh procedures and view Macintosh icons, such as the Chooser and Finder, even though that user is accessing resources on a Windows NT server.

Figure 4.9 shows these three operating systems in a multivendor environment. Each of these vendors provides utilities that: 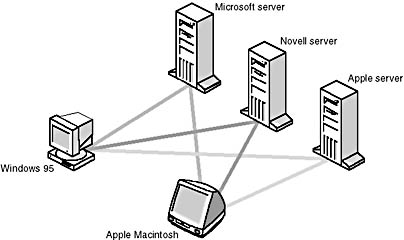 Microsoft has built a redirector that recognizes Microsoft networks into the following Microsoft operating systems:

The redirectors are automatically implemented during the operating system installation. A setup utility loads the required drivers and then edits the startup files so the redirector will function when the user turns on the computer.

Microsoft redirector software not only makes it possible for clients to access resources, but also provides each Windows for Workgroups and Windows NT client with the capability to share its own resources.

Microsoft in a Novell Environment Microsoft and Novell products are interoperable.

In the Macintosh environment, the redirector for AppleShare networking is included with the AppleTalk operating system and provides the file-sharing function. The client software is included with every copy of the Apple operating system. There is also an AppleShare print server, which is a server-based print spooler. This means that Macintoshes are equipped to participate in Apple networks.

The following points summarize the main elements of this lesson.

To carry out this exercise, you will need to draw on information presented in all lessons in this chapter.

A small company in Montana designs and manufactures kits for building log houses. Thanks to a successful product and solid reputation, its prospects are good. The owner of the company wants to connect the office by means of a network that is capable of supporting as many as 10 computers and users. The company employs two salespeople, an office manager, a drafter, a graphic designer, the mill foreman, and a number of employees who do not use computers.

The owner's computer is running Windows 98 with a standard suite of office-application software and a popular project management-software application. The office manager, whose Windows 98 machine runs the same kind of office-application suite as the owner, prints to a letter-size laser printer that is connected directly to the computer. The owner and the office manager have internal modems in their computers that are daisy-chained through the fax machine to the single analog phone line.

The company also employs a computer-aided drafting (CAD) operator, who makes fabrication drawings for the employees in the mill. His computer operating system is Windows NT, and his primary application is a vector CAD program which plots to a roll-feed device that is cabled directly to the computer's printer port.

The two salespeople have portable computers that run Windows 98. Their major applications are included in the same office suite.

The computer graphic artist, who creates catalog art and presentation material, uses an Apple G3 computer running high-end graphics software as well as the same office suite as the owner and office manager. His computer prints to a high-resolution color postscript printer through its standard port.

The owner wants everyone on this network to be able to exchange files, use both printers, and have access to company e-mail through an Internet service provider. She has made it clear that she does not want a network that requires high administrative overhead.