When a Windows 2000 domain is created, the first server installed, or the first Windows NT server to be upgraded, takes on all the FSMO roles in the domain.

In a large forest, using a single server for all FSMO roles might cause a connection and processor bottleneck on the server. Once the restructure is complete, the loading of the servers in the domain can be examined and the FSMO roles can be distributed across different servers.

If you encounter problems using MoveTree, try running the program on the server designated as the RID master of the domain. The RID master will know which SIDs are used by each domain controller in the domain.

If you type the Netdom command netdom query fsmo, each of the FSMO servers in the forest will be listed. In addition to using Netdom, the Active Directory Replication Monitor program, one of the support tools supplied on the Windows 2000 CD-ROM, also allows you to view which servers are fulfilling each FSMO role. Figure 10.7 shows the FSMO Roles property as displayed for the server TRAINKIT1. 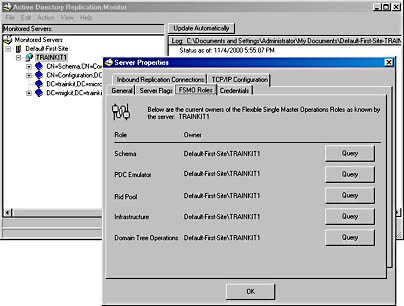 Presently, each of the roles is held by TRAINKIT1. Active Directory Replication Monitor will enable you to query the status of each role, to log replication statistics, and to graphically display the layout of the domain. To open the program, select Active Directory Replication Monitor from the Support Tools folder of the Program folder. You installed the support tools on TRAINKIT1 in Chapter 9.

Ntdsutil is an interactive command-line program used to perform database maintenance of the Active Directory store, to manage and control the FSMO, and to clean up metadata left behind by abandoned domain controllers. You must type commands to connect to the domain to be managed and then perform the required actions. As you'll see in Chapter 11, "Troubleshooting Windows 2000 During and After Migration," you can use the Ntdsutil program to seize an FSMO role from another server and repair problems on your network servers.

Windows 2000 servers that are now handling file and print services or distributed application services will need to be optimized for those roles.

You can optimize the connection by choosing one of the following:

The default setting is to maximize data throughput for file sharing.

In this practice, you'll change the optimization for file and printer sharing to Balance for the TRAINKIT1 system.

The file and printer sharing setting doesn't affect performance at the server itself, only for network clients connecting to the server over the local area connection.

How applications are prioritized within Windows 2000 can be configured using the Performance Options system property. This property controls how the priority of applications running in the foreground is boosted to provide a better user interface. 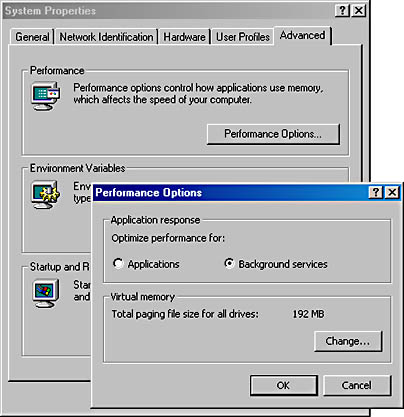 The virtual memory settings on a Windows 2000 system can have a large effect on system performance. After the migration, you might want to review the settings for virtual memory and change paging file sizes and locations.

In general, you should locate paging files on all the physical drives on a system to distribute the paging load. Figure 10.9 shows the Virtual Memory dialog box. You can also use this dialog box to set the maximum registry size. In this figure, a paging file has been created on each of the available drives. 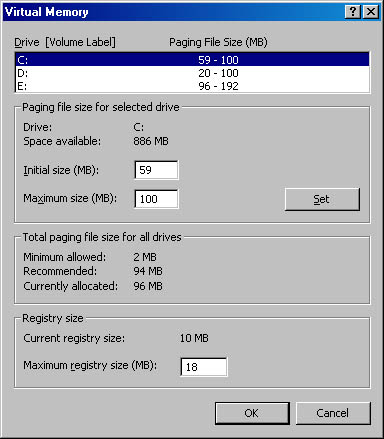 In this lesson, you learned about the areas that require attention relative to system performance after the upgrade. The roles of the servers within the domain should be investigated, along with the replication activities being performed. The performance of the system with respect to network clients should be addressed, along with application priority and virtual memory size and configuration.