Table B.1 shows the standard automated installation techniques available and how each can be used.

The answer file takes the place of user selections that would normally be requested during the Windows 2000 installation: 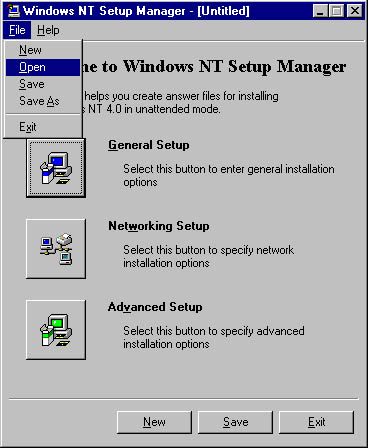 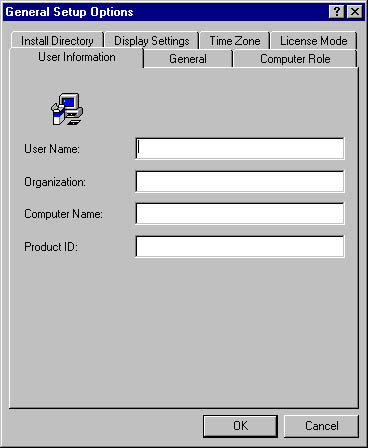 The Setup Manager wizard is not able to

The Setup Manager wizard can be used to modify an existing settings file, create an empty settings file, or create an answer file that duplicates the present configuration of a machine. It can also configure the user interaction level required during the install, from a fully automated installation to just providing the settings as defaults.

The answer file that is produced can be used in an installation, to perform a SysPrep installation (described next), or for use within RIS (described later).

During the creation of the answer file, you have the option to enter the Administrator password. Note that this password is held in text form in the answer file and is a potential security risk, as it is immediately visible to anyone who can view the file.

Once the answer file has been created, you can then edit it using a text editor such as Notepad and define additional parameters.

SysPrep is a utility program that enables you to use disk duplication to ease the installation of Windows 2000 on a large number of target machines. The Sysprep.exe program is contained in the Deploy.cab file in the \Support\Tools folder of the Windows 2000 installation CD. A master copy of an installation is prepared and then duplicated using third-party software onto the hard disks of the target systems.

The sequence of steps when using SysPrep would be as follows:

The Mini-Setup Wizard automatically finalizes Windows 2000 configuration and creates a unique SID for each computer system.

At the start of the distribution process, Windows 2000 is installed and configured on a master computer. Any required applications are added to this system to build an environment as required by the users. Once the installation has been audited and verified as correct, SysPrep is used to prepare the disk in the master computer for duplication.

When SysPrep completes, the disk in the master computer can be duplicated or distributed using an appropriate third-party tool. When a system containing a duplicated disk boots up, it performs a "mini-setup." Once the mini-setup has completed, the system reboots and the SysPrep folder is deleted, leaving a finished installation. The SysPrep process gives each machine a new, unique SID value during the install process.

The Mini-Setup Wizard runs the first time a computer is booted from a disk that has been created using SysPrep. It configures any Plug and Play devices on the target system and prepares Windows 2000 for execution on that machine. It reads the Sysprep.inf file and requests user input for any configuration items that are not supplied.

Normally, the Mini-Setup Wizard will request the user for configuration infor-mation. The Sysprep.inf file can be placed on the computer to customize and automate the installation of Windows 2000. The Sysprep.inf file contains configuration information that is used by the Mini-Setup Wizard. It is possible to provide this file on a floppy disk for use during the installation process.

You can also use SysPrep to audit an installation to ensure that it is configured correctly. This audit option removes the need to test the image on other systems. When running SysPrep in audit mode, it will not create new SID values for the system. However, SysPrep will perform all other installation options using the Mini-Setup Wizard and the Sysprep.inf file. The system can then be tested to ensure that all the settings are as required. Once the settings are verified, you would then rerun SysPrep to produce the image to be deployed.

Because the Mini-Setup Wizard performs Plug and Play enumeration of hardware in a system, it is not necessary for all the target machines to have exactly the same hardware configuration, but they must have the following:

If you have different hardware configurations, you will need a number of SysPrep images to be prepared and deployed.

The drive letter after the /syspart option specifies the drive onto which the Windows 2000 distribution will be copied. The /tempdrive option is also required and must be set to the same drive. When the setup program finishes, it marks the SysPart partition as active. The next time the system is rebooted, it will be from this partition.

The prepared drive must be removed from the master system and installed or duplicated using another machine. The Unattended.txt file is used to configure Windows 2000 Setup when it runs on the target. It can be left out of the command, in which case, a standard installation will be performed.

For example, if you have a computer with a host name Michaelis containing two disk drives C: and D:, you can prepare the D: drive with the Windows 2000 files by running this command:

This command will do the following:

Using SysPart does not preinstall any part of the Windows 2000 system on the disk, but it does eliminate the need for additional media such as a CD-ROM drive or a network connection. Windows 2000 is installed more quickly, as it does not have to be copied onto the system at the start of the installation.

When using this method, please note the following:

Best practice is to create a bootable Windows 2000 disk for your reference system prior to using SysPart. Otherwise, the C: drive in your reference system will no longer be bootable, and you will have to use recovery techniques to reboot into Windows 2000. Once you have used SysPart, remove the target hard disk. If it is a hot-swappable disk, you can reset the active partition by using Computer Management in the Administrative Tools folder. Otherwise, you might have to reboot using the bootable disk and then change the active partition back to the original C: drive in your reference machine.

In general, if you take an image of the drive for later deployment, ensure that the destination drive has the same geometry (sectors per track, number of tracks, and so on); otherwise, the copied disks might not boot correctly.

If the target machines are able to boot from the CD-ROM drive, Windows 2000 can be deployed in this way. Note that the bootable CD-ROM only detects existing versions of Windows 2000 on the hard disk and not any version of Windows NT, so the bootable CD-ROM install cannot be used to perform any upgrades of Windows NT. It can be used on a Windows NT system only to perform a clean install of Windows 2000. The setup can be configured as for an unattended installation. The unattended answer file must be supplied on a floppy disk. The file on the disk must be named Winnt.sif. The sequence for installation on a system using a CD-ROM is as follows:

The RIS server is a service that can be installed on a Windows 2000 Server (see Figure B.5). It accepts requests from clients and distributes Windows 2000 images to them. For further information on deploying Windows 2000 via RIS, see Chapter 15 of MCSE Training Kit—Windows 2000 Active Directory Services from Microsoft Press. 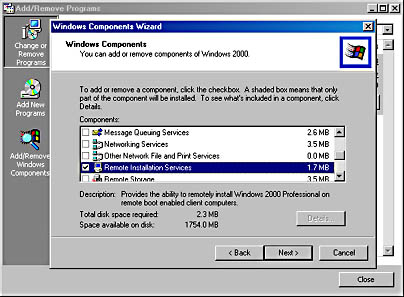 The distribution of a large number of images can produce a lot of network traffic and loading on the host server. The timing and number of simultaneous distributions should be carefully controlled to reduce the impact on normal network operation.

Systems Management Server (SMS) is a management tool that uses Windows Management Instrumentation (WMI) and software scanners to build and maintain a detailed inventory of systems on a network. The information is held in a Microsoft SQL Server–based repository.

In addition, administrators can create and deploy jobs that are executed by the SMS agents on the systems. The jobs can perform a clean installation or an upgrade of software such as Windows 2000 Professional and Windows 2000 Server (and their associated service packs) on the client machines. SMS can also be used to contact agents in the remote systems and perform diagnostic tasks.

SMS is applicable only if the destination system is already running an operating system connected to SMS and running the appropriate agents. However, the inventory mechanisms that form part of SMS can be useful in managing the migration process, in that the number and nature of the upgrades that have been performed can be obtained from the SQL repository.

It might be necessary to install applications in addition to Windows 2000 Professional. Some of the installation tools just discussed allow applications to be distributed at the same time as the operating system. For example, you can use SysPrep to create an image that contains any number of additional programs.

The [GuiRunOnce] Section of the Unattended Answer File

For some installations, it might be necessary to set up the applications once Windows 2000 has been installed. This can be achieved by using the [GuiRunOnce] section, which can be added to the unattended answer file.

The [GuiRunOnce] section specifies commands to be executed the first time a user logs on to a computer after setup has completed. These commands can perform the installation of the applications. The commands can simply run the setup program of the required program (using a quiet form of the setup if possible), or they can invoke Windows Installer Service to perform the installation. 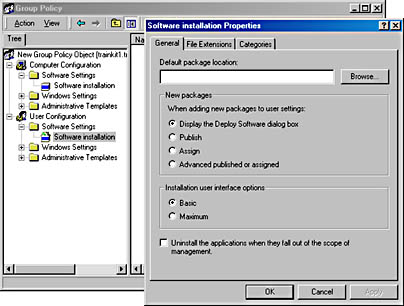 Figure B.6 Software deployment location in a GPO 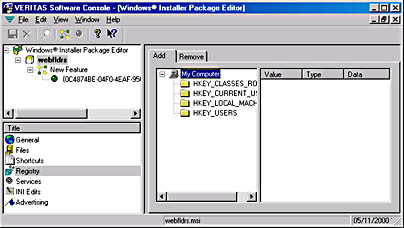 Windows Installer Package Editor is supplied on the Windows 2000 installation CD in the \Valueadd\3rdparty\Mgmt\Winstle folder.