One very important processor specification to be aware of is the endian orientation. This drastically affects how byte ordering affects data orientation. Depending on the processor and its manufacturer, data structures larger than a byte are typically arranged in one of two orientations:

One interesting aspect is that for either little or big endian, the 8-bit byte both have an identical bit ordering of bits {07}. The MIPS processors (as a default) and the 80x86 are little-endian, but the Motorola 68000 and the PowerPC RISC microprocessor are big-endian. 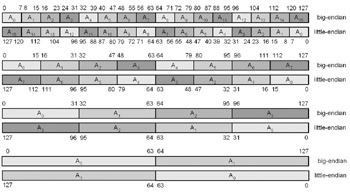 Figure 3-10: Big-endian and little-endian byte orientations in relation to memory

The Intel 80x86 processor is a little-endian based processor. That is, the memory is laid out in a linear fashion so the first byte contains the LSB (least significant bit). For example, as Figure 3-11 shows, a dword has the lower bits (70) in the first byte (#0) and bits (3124) in the fourth byte (#3). This pattern is repeated over and over.

Figure 3-11: Visible connections between individual bytes and the left shift of a 32-bit data element

In the C programming language, use the following shift to the left by one for a 32-bit data word (int).

Dealing with endian orientation can sometimes be confusing, especially if you primarily work in little-endian and then need to convert data to the form of big-endian. This makes perfect visual sense for bigendian because the fourth byte contains the least significant bit (LSB) and data is shifted to the left toward the most significant bit (MSB). For little-endian the same shift in C magnifies the value by a factor of two for each bit but visually it makes no sense because the LSB is on the left. By using a mirrored reflection it then becomes clear.

At this point this should be enough conversation about endian orientation of memory until you get to Chapter 6, "Data Conversions," where this is discussed more thoroughly.

The Art of Assembly Language

Windows Assembly Language and Systems Programming: 16- and 32-Bit Low-Level Programming for the PC and Windows