Parallel extensions of C and Fortran 77, which allow the programmer to explicitly express in a portable way array-based computations that can be efficiently implemented for any vector and superscalar processor, provide a comprehensive solution to the problem of efficiently portable programming of these architectures. The compiler for a parallel language does not recognize what portions of source code are suitable for efficient execution on vector and superscalar processors. The compiler just focuses on the generation of efficient target code for the array operations specified by the programmer. In generating the target code, the compiler is potentially able to optimize the array-based computations as global as it is allowed by the modular structure of source code.

A number of parallel supersets of C and Fortran 77 have been designed for efficiently portable programming vector and superscalar processors. In the book, we outline two of them: Fortran 90 and C[ ].

Fortran 90 is a new standard of the Fortran language released in 1991. It has been widely implemented in recent years. Fortran 90 adds many powerful extensions to the Fortran language. The new features of Fortran 90 can be divided into two categories based on their motivation. The first category unites the features aimed at modernization of the language according to the state-of-the-art in serial programming languages in order to make Fortran competitive with computer languages created later (e.g., C and C+). The features of the category include

These extensions upgrade the archaic syntax of Fortran 77 and introduce modern storage management, a control structure, a procedural structure, and a basic support for object-oriented programming. The new features are very important for Fortran programmers, but they are not directly related to parallel programming vector and superscalar architectures.

The second category of added features includes the extensions made to support explicit expression of operations on arrays. Unlike Fortran 77, Fortran 90 considers arrays first-class objects and allows whole-array operations, assignments, and functions. In the case of arrays, operations and assignments are extended in an obvious way—element by element. So, for the arrays

performs elementwise addition of the arrays a and b, storing the result in the array c.

Similarly all appropriate intrinsic functions are array-valued for array arguments. They operate elementwise if given an array as their argument. Therefore the statement

is legal in Fortran 90 and has the obvious semantics. Fortran 90 also allows the programmers to write array-valued functions themselves.

Array expressions may also include scalar constants and variables, which are replicated (or expanded) to the required number of elements. For example, the statement

increases all elements of the array a by 2.0, storing the result in the array c.

Occasionally some elements of arrays in an array-valued expression must be treated specially. This is done by using the WHERE structure. For example, to avoid division by zero in the statement

where a is an array, the WHERE statement

or the WHERE construct

is correct because all of its array elements are conformable.

designates the ith row of array a. This rank 1 section has a shape of {50}. Note that the third component of the triplet expression along with the

selects every third element of this row. The shape of this section is {16}. The expression

designates this row in reverse order. The section is also of rank 1 and has a shape of {50}. The expression

designates a part of the jth column (a section of the shape {30}). The expression

Along with triplets, vector subscripts may also be used to specify array sections. Any expression whose value is a rank 1 integer array may be used as a vector subsript. For example, the code

assigns the reversed first column of array a to array b. The array-valued variable index is used as a vector subscript in expression a(index,1) designating an array section.

Whole arrays and array sections of the same shape can be mixed in expressions and assignments. Note that unlike a whole array, an array section may not occupy contiguous storage locations.

The array constructors are only able to produce one-dimensional arrays. In order to construct arrays of higher rank, the function RESHAPE can be used. The second argument of the function is the shape of the output array, while its first argument specifies the array whose elements should be used for constructing the output array of the specified shape. For example, in order to assign zeros to all elements of the array a,

has two formal array arguments a and b, whose specification only defines their type and rank, but bounds are just marked with colons. This means that the actual shape is taken from that of the array arguments each time the subroutine is called. The local array temp is an example of the automatic array. Its size is set at runtime with the intrinsic function SIZE, which returns the number of elements in the dimension, specified by the second argument, of the array specified by the first argument. The automatic array are released as soon as control leaves the procedure in which it is defined.

2.6.2.1. Vector Value and Vector Object. A basic new notion of the C[ ] language is vector value, or simply vector. Vector value is an ordered sequence of values (or vector values) of any one type. Any vector type is characterized by two attributes: the number of elements and the type of elements.

ANSI C does not define the notion of value of array object. The C[ ] language does, and this value is a vector. For example, the value of the array defined with the declaration

consisting of three vectors, each composed of two integers. This vector type is named by the type name int[3]_[2]. We also say that the vector has the shape {3, 2}. By definition, the shape of the array is the same as that of its vector value. Thus, in C[], array object is a particular case of vector object.

Thus a C[ ] array has at least three attributes: the type of elements, the number of elements, and the allocation stride. For example, both the declaration

define an array of the form

defines an array of the form

The size of the slot between array elements is 2 X sizeof (int) bytes.

In C, a pointer has only one attribute—the type of object it points to. This attribute is necessary for the correct interpretation of the value of the object

For example, the declarations

form the following structure of storage 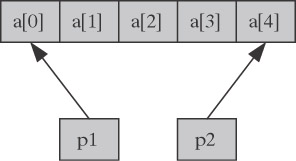 In C[ ], an integer nonconstant expression may be used to specify the size of an automatic array, or the stride of an atomatic array or pointer. The following fragment of C[ ] code, which initializes with units the diagonal elements of an n X n matrix, illustrates the use of such dynamic arrays and pointers:

To support access to an array as the whole, C[ ] introduces the postfix [ ] operator (the blocking operator). The operand of the operator has the type “array of type.” The [ ] operator blocks the conversion of the operand to a pointer. For example, if the arrays a, b, and c are declared as

In C, an lvalue is an expression designating an object. For example, if the array d is declared as

In addition to lvalue, C[ ] introduces the notion of lvector as an expression designating a vector object. Modifiable lvector is an lvector that can be used as the left operand of an assignment operator. Array object is a particular case of vector object. Therefore expressions d, d[0], d[], and d[0][] are lvectors. At the same time, d[] and d[0][] are modifiable lvectors, meanwhile d and d[0] are not.

In principal, the extended notions of array and pointer in concert with the [ ] operator support the access to whole arrays and subarrays. For example, if array a is declared as

designates an array of four ints allocated with stride 5 that contains the main diagonal of matrix a:

designates a subarray of the array a that contains the first superdiagonal of the matrix a:

Not every, even regular, set of objects belonging to an array is its subarray. For example, if array a is declared as

then the inner elements of matrix a, 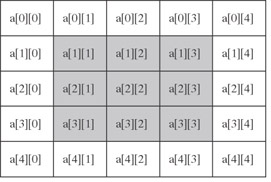 do not make up a subarray. Therefore there is no constant modifiable lvector similar to those used for designation of the “diagonal” subarrays that designates this “inner square.”

In order to support access to such array sections of general form, C[ ] introduces the [:] operator (the grid operator). In the general case, this quaternary operator has the following syntax:

where expression e may have type “array of type” or “pointer to type” and expressions l, r, and s have integer types and denote the left bound, right bound, and stride respectively. In that case the expression designates a vector object consisting of (r - s)/l + 1 elements of type type. The ith element of the resulting vector object is e[l + s_ _i]. Expression e[l_:_r_:_s] is an lvector. It will be a modifiable lvector, if all the expressions {e[l + s_ _i]}i=0,1,…are either modifiable lvalues or modifiable lvectors. If stride s is equal to 1, the corresponding operand along with the preceding semicolon may be omitted (i.e., e[l_:_r] may be used as a short form of e[l_:_r_:_1]).

The first operand e of the grid operator may have a vector type. In that case the operator is applied elementwise to each element of the vector value of e. For example, let the vector value be {u1,…, uk}. Then the expression e[l_:_r_:_s] will designate a vector of k vectors with the ith element of the jth vector being uj[l + s_ _i] (j = 1,…, k). This successive application of several grid operations allows the programmer to construct modifiable lvectors designating diverse sections of multidimensional arrays (or more precisely, arrays of arrays).

Thus the array section above can be designated with the modifiable lvector a[1:3][1:3]. Indeed, expression a[1:3] is an unmodifiable lvector designating a vector object consisting of three arrays a[1], a[2], and a[3] of type int[5] that correspondingly contain the second, third, and fourth rows of the 5 X 5 matrix a: 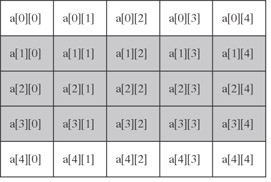 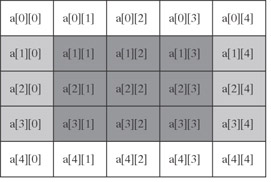 The second operand l and/or the third operand r of the grid operator may be omitted. If l is omitted, the left bound is set to 0. If r is omitted, the right bound is set to n - 1 if the first operand e is an n-element array, or determined from the context if e is a pointer. So expression a[:][:] is a modifiable lvector designating as a whole the 5 X 5 array a above. Note that the more compact modifiable lvector a[] also designates this array.

2.6.2.4. Elementwise Vector Operators. The operand of the scalar cast operator and the unary operators &, *, +, -, ~, !, ++, and -may have a vector type. In that case the operators are applied elementwise to each element of the vector operand to produce the vector result.

For example, if array p is defined with declarations

assigns the value of the ith element of the array b to all elements of the ith row of the array a (i = 0,…, m - 1). The following is a fragment of the C[ ] application performing the LU factorization of the square n X n matrix a by using the Gaussian elimination:

The definition of the subcript operator [ ] is that e1[e2] is identical to (*((e1) + (e2))), and the expressions e1 and e2 may be of vector type. This allows the programmer to construct lvectors designating irregular array sections. For example, the C[ ] code

The first operand of the . operator may have a vector type. The second operand must name a member of a structure or union type. In that case the operator is executed elementwise, and the result will have the same shape as the first operand. Expression e → id is identical to expression (*e).id.

computes the dot product of vectors a and b. The code

multiplies matrices a and b storing the result into matrix c.