Among the different technologies available for wireless local networks, the most popular without a doubt is IEEE 802.11. Such popularity is evidenced by the number of products based on this standard that are commercially available. We will describe technologies used for access networks, with a particular emphasis on the 802.11 standard; also, we will discuss other technologies such as Bluetooth and HiperLAN.

It is also worth noting that some companies (e.g., Airify) have announced products to support multiple wireless standards using the same network interface; this way, the same device could be used to take advantage of WLAN technologies such as 802.11 or Bluetooth, or wide area wireless, such as GSM or GPRS. However, these types of products have yet to be commercially available.

The Institute of Electrical and Electronic Engineers (IEEE) ratifed the original 802.11 specification in 1997 as the standard for wireless LANs (WLANs). That version of 802.11 provides for 1 and 2 Mbps data rates and a set of fundamental signaling methods and other services. Some disadvantages with the original 802.11 standard are the data rates that are too slow to support most general business requirements. Recognizing the critical need to support higher data transmission rates, the IEEE ratified the 802.11b standard for transmissions of up to 11 Mbps. With 802.11b (also known as WiFi), WLANs are able to achieve wireless performance and throughput comparable to wired 10-Mbps Ethernet. 802.11a offers speeds of up to 54 Mbps, but runs in the 5-GHz band, so products based on this standard are not compatible with those based on 802.11b. [1] Several task groups are working on further developments for the 802.11 standard, as shown in Table 10.1.

Like all 802.x standards, 802.11 focuses on the bottom two layers of the OSI Reference Model, the physical and the data link layers. In fact, the standard covers three physical layer implementations: direct-sequence (DS) spread spectrum, frequency hopping (FH) spread spectrum, and infrared (IR). A single medium access control (MAC) layer supports all three physical layer implementations, as shown in Figure 10.1. We will further discuss the two ISO layers that the 802.11 standard deals with. 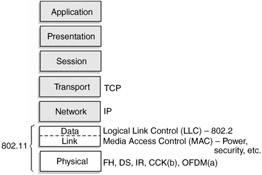 Each computer (mobile, portable, or fixed) is referred to as a station in 802.11. Mobile stations access the LAN during movement. The 802.11 standard defines two modes: infrastructure mode and ad hoc mode. In infrastructure mode (Figure 10.2), the wireless network consists of at least one access point (AP) connected to the wired network infrastructure and a set of wireless end stations. 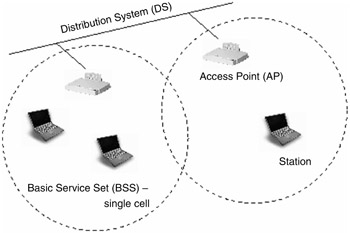 The ad hoc mode (also called peer-to-peer mode or an independent basic service set, or IBSS) is simply a set of 802.11 stations that communicate directly with one another without using an access point or any connection to a wired network (Figure 10.3). In ad hoc networks, there is no base and no one gives permission to talk; these networks are spontaneous and can be set up rapidly, but are limited both temporally and spatially. 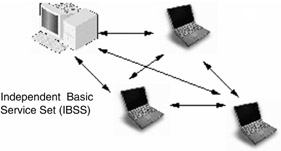 The three physical layers originally defined in the 802.11 standard included two spread spectrum radio techniques and a diffuse infrared specification. The radio-based standards operate within the 2.4-GHz ISM (industrial, scientific, and medical) band. These frequency bands are recognized by international regulatory agencies, such as the FCC (United States), ETSI (Europe) and the MKK (Japan) for unlicensed radio operations. As such, 802.11-based products do not require user licensing or special training. Spread spectrum techniques, in addition to satisfying regulatory requirements, boost throughput and allow many unrelated products to share the spectrum without explicit cooperation and with minimal interference.

The original 802.11 wireless standard defines data rates of 1 and 2 Mbps via radio waves using frequency hopping (FH) spread spectrum or direct sequence (DS) spread spectrum. It is important to note that these are fundamentally different transmission mechanisms and will not interoperate with each other. Direct sequence has a more-robust modulation and a larger coverage range than FH, even when FH uses twice the transmitter power output level. Frequency hopping gives a large number of hop frequencies, but the adjacent channel interference behavior limits the number of independently operating collocated systems. Hop time and a smaller packet size introduce more transmission time overhead into FH, which affects the maximum throughput. Although FH is less robust, it gives a more-graceful degradation in throughput and connectivity.

Under poor channel and interference conditions, FH will continue to work over a few hop channels a little longer than over the other hop channels.

The data link layer within 802.11 consists of two sublayers: logical link control (LLC) and media access control (MAC). 802.11 uses the same 802.2 LLC and 48-bit addressing as other 802.x LANs, allowing for very simple bridging from wireless to wired networks, but the MAC is unique to WLANs.

Of particular interest in the specification is the support for two fundamentally different MAC schemes to transport asynchronous and time-bounded services. The first scheme, distributed coordination function (DCF), is similar to traditional legacy packet networks. The DCF is designed for asynchronous data transport, where all users with data to transmit have an equally fair chance of accessing the network. The point coordination function (PCF) is the second MAC scheme. The PCF is based on polling that is controlled by an access point.

The basic access method, DCF, is drawn from the family of Carrier Sense Multiple Access with Collision Avoidance (CSMA/CA) protocols. The collision detection (CD) mechanism as used in the CSMA/CD protocol of Ethernet cannot be used under 802.11 due to the near/far problem: to detect a collision, a station must be able to transmit and listen at the same time, but in radio systems the transmission drowns out the ability of the station to hear a collision. So, 802.11 uses CSMA/CA, under which collisions are avoided by using explicit packet acknowledgment (ACK) to confirm that the data packet arrived intact.

There are other WLAN technologies available besides 802.11, and we will review some of the most prominent ones, namely Bluetooth and HiperLAN. It is relevant to point out that up to now the market for WLANs has been dominated by products based on the 802.11 standard. There are starting to appear some products based on Bluetooth but they have been very deceiving and many important equipment and software manufacturers have decided not to support this standard, [2], [3] at least temporarily. Although some early prototypes for HiperLAN 2 have been demonstrated, [4] there are no commercial products available yet.

Between 1990 and 1992, the European Telecommunications Standards Institute (ETSI) noticed the trend toward faster and better wireless networks and started the development of standards for this type of network. Within this framework, the Broadband Radio Access Networks (BRAN) Project 3 of ETSI is working on a standard called High Performance Radio Local Area Network (HiperLAN). This project quickly separated into four different HiperLAN types:

The standard for HiperLAN 1 was finalized in 1996, although amendments were made to it in 1998. HiperLAN types 2 through 4 were designed to support only ATM networks, but at the moment HiperLAN 2 supports access to IP and UMTS networks. The names for types 3 and 4 were changed to HiperAccess and HiperLink, respectively. Figure 10.5 gives an overview of the different HiperLAN standards.

Bluetooth is a protocol intended to wirelessly connect cellular phones, laptops, handheld computers, digital cameras, printers, and other devices. [6] It operates over short distances of up to 10 meters, basically being a wireless replacement for data cables and infrared connections. There are currently some discussions underway to extend its range to 100 meters by increasing the transmit power to 100 mW. Although Bluetooth was initially developed by Ericsson in the late 1990s, it is currently led by the Bluetooth SIG 4, including members such as Nokia, IBM, Toshiba, Intel, 3Com, Motorola, Lucent Technologies, and Microsoft. It is, then, not a technology backed by an standards body, but instead backed by an industry consortium.

The Bluetooth system supports point-to-point or point-to-multipoint connections. In point-to-multipoint, the channel is shared among several Bluetooth units. Two or more units sharing the same channel form a piconet. There is one master unit and up to seven active slave units in a piconet. These devices can be in any of the following states: active, park, hold, and sniff. Multiple piconets with overlapping coverage areas form a scatternet (Figure 10.6). 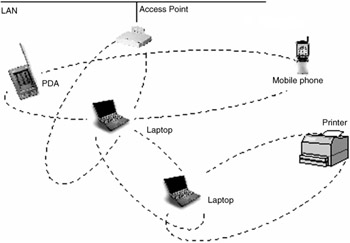 The Bluetooth system consists of a radio unit, a link control unit, and a support unit for link management and host terminal interface functions.

The radio operates in the 2.4-GHz ISM band. Depending on the class of the device, a Bluetooth radio can transmit up to 100 mW (20 dBm) to a minimum of 1 mW (0 dBm) of power. It uses frequency hopping for low interference and fading, and a TDD (time-division duplex) scheme for full-duplex transmission and transmits using GFSK (Gaussian frequency shift keying) modulation. [7]

The Bluetooth protocol uses a combination of circuit and packet switching. The channel is slotted and slots can be reserved for synchronous packets. The protocol stack can support an asynchronous connectionless link (ACL) for data and up to three simultaneous synchronous connection-oriented (SCO) links for voice or a combination of asynchronous data and synchronous voice (DV packet type). Each voice channel supports a 64 kbps synchronous channel in each direction. The asynchronous channel can support a maximum of 723.2 kbps uplink and 57.6 kbps downlink (or vice versa) or 433.9 kbps symmetric links. The stack (shown in Figure 10.7) primarily contains a physical level protocol (baseband) and a link level protocol (LMP) with an adaptation layer (L2CAP) for upper layer protocols to interact with lower layer ones. 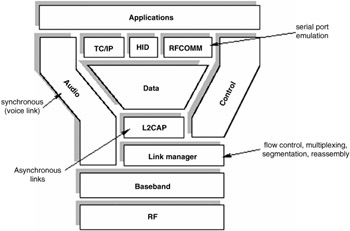 It should be clear, given its distance coverage, bandwidth, and other characteristics, that Bluetooth does not really fit within the profile for supporting WLANs as their promoters portend through intense marketing campaigns. Bluetooth fits more within the profile of technologies used for wireless personal area networks (WPANs), as those studied by the 802.15 Working Group.

Given their ease of installation, dropping prices, and increasingly higher speeds, WLANs are gradually replacing many wired LANs as the networks of choice for typical activities such as Internet access. There are currently coexistence problems between some of the technologies we mention here, namely between 802.11 and Bluetooth. A source of problems is the fact that Bluetooth has been designed to transmit blindly, whenever its timing dictates, as if there was no possibility that a collocated system might be using the same frequency (as 802.11 does). This has earned it the reputation of a "bad neighbor" in the 2.4-GHz band. There are also other common sources of interference in this unregulated band, including microwave ovens and newer generations of cordless phones. Historically, microwave ovens are by far the most-significant source of interference in residential and office environments, but with the impending avalanche of new communications devices with embedded Bluetooth radios, serious questions have been raised about their interference on wireless LANs. The 802.15 WPAN Task Group 2 is developing recommended practices and mechanisms to facilitate coexistence between WLANs (such as 802.11) and WPANs (such as Bluetooth).

[3]Orlowski, A., Microsoft turns the drill on Bluetooth, August 1, 2001, available at http://www.theregister.co.uk.