You are designing a complex enterprise application that is composed of a large number of components across multiple levels of abstraction.

How do you structure an application to support such operational requirements as maintainability, reusability, scalability, robustness, and security?

When structuring your application, you must reconcile the following forces within the context of your environment:

Figure 4.2 shows how this layering scheme would look. 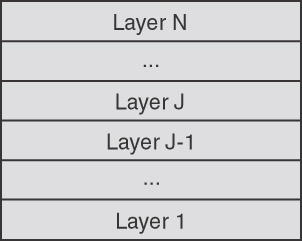 The key to Layered Application is dependency management. Components in one layer can interact only with peers in the same level or components from lower levels. This helps reduce the dependencies between components on different levels. There are two general approaches to layering: strictly layered and relaxed layered.

A relaxed layered application loosens the constraints such that a component can interact with components from any lower layer. Therefore, in Figure 2, not only can Layer J interact with Layer J-1, but with layers J-2 and J-3.

The relaxed approach can improve efficiency because the system does not have to forward simple calls from one layer to the next. On the other hand, the relaxed approach does not provide the same level of isolation between the layers and makes it more difficult to swap out a lower layer without affecting higher layers.

For large solutions involving many software components, it is common to have a large number of components at the same level of abstraction that are not cohesive. In this case, each layer may be further decomposed into one or more cohesive subsystems. Figure 4.3 on the next page demonstrates a possible UML notation for representing layers that are composed of multiple subsystems. 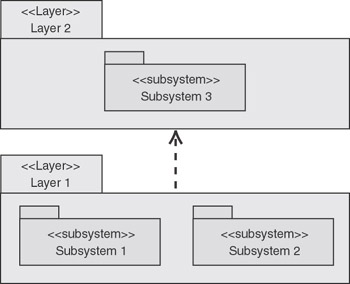 The basic Layered Application pattern is often augmented with the following techniques:

There are basically two modes of interaction within the layered application:

In the top-down mode, an external entity interacts with the topmost layer of the stack. The topmost layer uses one or more services of the lower-level layers. In turn, each lower level uses the layers below it until the lowest layer is reached.

For the sake of discussion, this pattern assumes that the external entity is a client application and the layered application is for a server-based application that exposes its functionality as a set of services. Figure 4.4 is a UML sequence diagram that depicts a common top-down scenario. 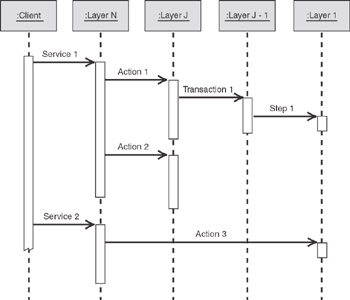 First, a single incoming invocation can result in multiple outgoing invocations. The invocation of Service 1 on Layer N illustrates this case. This quite often occurs when a higher-level service aggregates the results of several lower-level services or coordinates the execution of multiple lower services that must be executed in a particular order. For example, an ASP.NET page might feed the output of a customer domain component to an order component whose output is in turn fed to an invoice component.

Second, this scenario illustrates the relaxed layered approach. The implementation of Service 2 bypasses all the intermediate layers and calls Layer 1 directly. A common example of this is a presentation layer accessing a data access layer directly, bypassing any intermediate business logic layers. Data maintenance applications often use this approach.

Third, an invocation of the service at the top layer does not necessarily invoke all of the layers. This concept is illustrated by the Service 1 to Action 2 sequence, which occurs when a higher level can process an invocation on its own or has cached the results of an earlier request. For example, domain components quite often cache results of database queries, which remove the need to invoke the data access layer for future invocations.

In the bottom-up mode, Layer 1 detects a situation that affects higher levels. The following scenario assumes that Layer 1 is monitoring the state of some external entity such as the file system of the server on which the server application is running. Figure 4.5 depicts a typical bottom-up scenario as a UML sequence diagram.

In this scenario, Layer 1 is monitoring the state of the local file system. When it detects a change, it fires an event exposed by a component from the J-1 layer. This component then invokes a callback delegate of Layer J, where the state of the domain layer is updated. The domain component then notifies Layer N that it has been updated by a delegate provided by Layer N for that purpose.

As in the first scenario, an input at one level can result in multiple outputs. A lower layer can notify any layer higher than it, not just the next higher layer. And finally, a notification does not necessarily have to percolate up the entire chain.

There are basically two approaches to implementing the Layered Application pattern:

Creating Your Own Layering Scheme

The other approach is to reuse an existing reference layered application to provide structure for your applications. The canonical three-layered application consists of the following three layers: presentation, domain, and data source. Even something as simple as this goes a long way towards achieving the benefits of the Layered Application pattern. An enhanced version of the canonical model is discussed in Layered Services Application.

Martin Fowler has found the use of mediating layers between the presentation and domain layers as well as between the domain and data source layers useful at times. For more information, see Fowler’s book, Patterns of Enterprise Application Architecture [Fowler03].

It is quite common for enterprise application architects to compose their solutions into the following three layers:

Layered Application generally results in the following benefits and liabilities: