In object-oriented programming, objects contain both data and behavior that, together, represent a specific aspect of the business domain. One advantage of using objects to build applications is that all manipulation of the data can be encapsulated inside the object. This makes the object self-contained and increases the potential for reuse of the object in other applications. However, objects cannot simply work in isolation. In all but the most trivial applications, objects must collaborate to accomplish more complex tasks. When objects collaborate, the objects may have to notify each other when an object changes state. For example, the Model-View-Controller pattern prescribes the separation of business data (the model) and the presentation logic (the view). When the model changes, the system must notify the view so that it can refresh the visual presentation and accurately reflect the model’s state. In other words, the view is dependent on the model to inform it of changes to the model’s internal state.

How can an object notify other objects of state changes without being dependent on their classes?

A solution to this problem has to reconcile the following forces and considerations:

Use the Observer pattern to maintain a list of interested dependents (observers) in a separate object (the subject). Have all individual observers implement a common Observer interface to eliminate direct dependencies between the subject and the dependent objects (see Figure 3.31).

When a state change occurs in the client that is relevant to the dependent objects, ConcreteSubject invokes the Notify() method. The Subject superclass maintains a list of all interested observers so that the Notify() method can loop through the list of all observers and invoke the Update() method on each registered observer. The observers register and unregister for updates by calling the subscribe() and unsubscribe() methods on Subject (see Figure 3.32). One or more instances of ConcreteObserver may also access ConcreteSubject for more information and therefore usually depend on the ConcreteSubject class. However, as Figure 3.31 illustrates, there is no direct or indirect dependency from the ConcreteSubject class on the ConcreteObserver class. 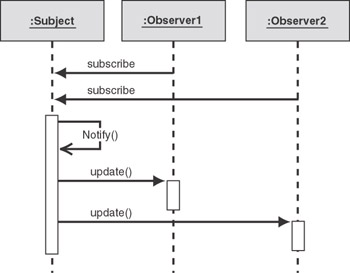 Notifying objects of changes without incurring a dependency on their classes is such a common requirement that some platforms provide language features to perform this function. For example, the Microsoft .NET Framework defines the notion of delegates and events to accomplish the Observer role. Therefore, you would rarely implement the Observer pattern explicitly in .NET, but should use delegates and events instead. Most .NET developers will think of the Observer pattern as a complicated way to implement events. 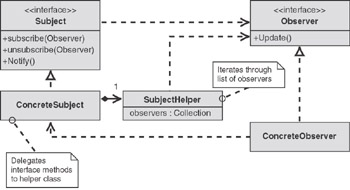 Figure 3.33: Using a helper class to avoid inheriting from the Subject class

Unfortunately, you now have to add code to each class that inherits from the Subject interface to implement the methods defined in the interface. This task can become very repetitious. Also, because the domain object coincides with ConcreteSubject, it cannot differentiate between different types of state changes that would be associated with different subjects. This only allows observers to subscribe to all state changes of ConcreteSubject, even though you may want to be more selective (for example, if the source object contains a list, you may want to be notified of updates, but not of insertions). You could have the observers filter out notifications that are not relevant, but that makes the solution less efficient, because ConcreteSubject calls all the observers just to find out that they are really not interested.

You can resolve these issues by separating the subject completely from the source class (see Figure 3.34). Doing so reduces ConcreteSubject to the implementation of the Subject interface; it has no other responsibilities. This allows DomainObject to be associated with more than one ConcreteSubject so that you can differentiate between different types of events for a single domain class.

When to Trigger an Update

When implementing the Observer pattern, you have two options for managing the triggering of the update. The first option is to insert the call to Notify() in the client right after each call to Subject that affects an internal state change. This gives the client full control over the frequency of the notification, but also adds extra responsibility to the client, which can lead to errors if the developer forgets to call Notify(). The other choice is to encapsulate the call to Notify() inside each state-changing operation of Subject. This way, a state change always causes Notify() to be called without additional action from the client. The downside is that several nested operations might cause multiple notifications. Figure 3.36 shows an example of this in which Operation A calls Sub-Operation B and an observer might receive two calls to its Update method. 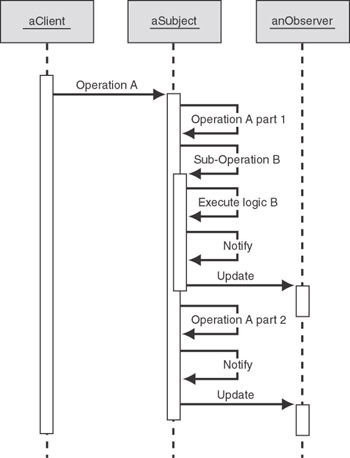 Calling multiple updates for a single, but nested operation can cause some inefficiency, but also leads to more serious side effects: The subject could be in an invalid state when the nested Notify method is invoked at the end of Operation B (see Figure 3.36) because Operation A has only been processed part of the way. In this case, the nested notify should be avoided. For example, Operation B can be extracted out into a method without notification logic and can rely on the call to Notify() inside Operation A. Template Method [Gamma95] is a useful construct for making sure the observers are notified only once.

In some cases, an observer may change the state of the subject while it is processing the update() call. This could lead to problems if the subject automatically calls Notify() after each state change. Figure 3.37 shows why. 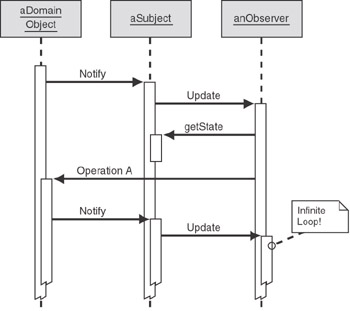 In this example, the observer performs Operation A in response to the state change notification. If Operation A changes the state of DomainObject, it then triggers another call to Notify(), which in turn calls the Update method of the observer again. This results in an infinite loop. The infinite loop is easy to spot in this simple example, but if relationships are more complicated, it may be difficult to determine the dependency chain. One way to reduce the likelihood of infinite loops is to make the notification interest-specific. For example, in C#, use the following interface for subject, where Interest could be an enumeration of all types of interest:

Allowing observers to be notified only when an event related to their specific interest occurs reduces the dependency chain and helps to avoid infinite loops. This is equivalent to defining multiple, more narrowly defined, event types in .NET. The other option for avoiding the loop is to introduce a locking mechanism to keep the subject from publishing new notifications while it is still inside the original Notify() loop.

Because Observer supports loose coupling and reduces dependencies, should you loosely couple every pair of objects that depend on each other? Certainly not. As is the case with most patterns, one solution rarely solves all problems. You need to consider the following tradeoffs when employing the Observer pattern.