Network engineers face a constant battle in today's network environments as demands for data and simplified communications continue to grow. They must find a way to manage the delicate balance between simplifying the delivery of information to end users with the ever present mindset of ensuring that the delivery will be secure. Without ensuring that data can maintain security levels as outlined in company security policies, it would not be wise to publish data to areas of the network that introduce widespread exposure to unauthorized individuals.

The decision to publish SharePoint data to the Web using ISA Server 2006 should only come after a good amount of time has been spent evaluating the data to be published and the depth of the security measures that should be in place. In some cases you may find that the data to be published does not pose any type of vulnerability to the company's intellectual property, brand, or personal privacy of the employees. In this case, publishing data without being overly concerned for data security is acceptable.

In many cases, however, data security is not a negligible piece of the deployment scenario. Rather, it is the key piece. In real-world implementations, the focus on security should never be absent from the task at hand. It is always best to error on the side of caution and work toward a solution that offers users access to pertinent information without jeopardizing company property. Microsoft's intention with the ISA Server 2006 product was to provide a means of facilitating the publication of internal resources to external users while still maintaining a blanket of security that protects the company and its property. The consistent challenge in real-world deployments is to find a happy medium between data security, ease of access, and ease of implementation.

In a situation such as this, you must always keep in mind that unmanaged devices such as Windows Mobile 5 Smartphones and Pocket PCs do not fall under the same constraints and restrictions of desktops and laptops that have been added as members of the domain. These devices, though manageable through the Microsoft Exchange server deployment, are readily accessible to not only the employees who own them but also to the malicious individuals looking to obtain any piece of company information. As with any deployment that involves external roaming users, security awareness training for the end-user population is a major factor in the success of the deployment. 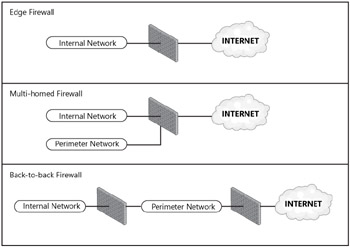 The edge firewall is by far the simplest and cheapest solution as it only involves a single firewall device that established a clear line between the internal network and the Internet. The down side is that there is a single point of attack and failure.

The back-to-back firewall, as you might have guessed, is the most expensive one, but it is also the solution that affords the highest level of security and the lowest level of granularity with our access controls. Table 19-1 outlines the pros and cons of each firewall implementation.

Before you learn about the infrastructure requirements for securely publishing SharePoint to Windows Mobile users, let's look at the network pieces that a corporation might already have employed in delivering a secure mobile messaging solution.

Solutions that involve the configuration of a perimeter network with two third-party firewall devices often include front-end servers placed into the perimeter network while the back-end storage servers are neatly tucked away on the internal network. The firewall configuration involves a loose set of firewall policy settings on the external firewall that allows traffic from any source terminating at the front-end servers. The internal firewall, on the other hand, protects the internal resources with a much more stringent set of firewall policy settings that allows traffic to pass through if the source of the traffic is a server in the perimeter network and the destination is a specific server on the internal network. This is illustrated in Figure 19-2. 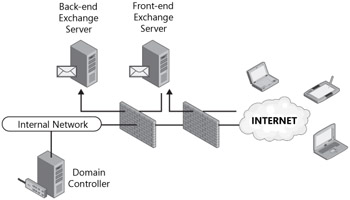 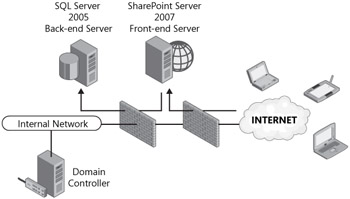 Figure 19-3: Deploying a SharePoint front-end server in a perimeter network with a back-end SQL server

If you're concerned with the idea of placing your SharePoint server in the perimeter network, then be assured that placing it on the internal network is even more unwise. The ramifications of placing it amongst the other internal resources are significant in that both the external and the internal firewall would have to be configured to allow Internet clients to pass through to the internal network. Indeed, unwise. So what should you do? Use Microsoft Internet Security and Acceleration (ISA) Server 2006 as the solution.

ISA Server 2006 comes in Standard and Enterprise Editions. The core difference in the editions lies in the scalability opportunities of Enterprise Edition. Standard Edition is limited to a single server with up to 4 CPUs and 2 GB of RAM. Enterprise Edition, on the other hand, has no hardware limitations and can scale as part of a Network Load Balancing (NLB) cluster with a maximum of 32 nodes. The combination of the size of the existing infrastructure and your projections for growth will determine which edition is right for you.

What ISA Server 2006 provides is a multi-tasking application that can exponentially enhance the security of traffic within, across, or directed to resources on your corporate network. ISA Server 2006 can function in one or all of three core roles:

Web publishing rules provide a host of advantages including:

By the end of this chapter, you will see just how good things can be when ISA Server 2006 is part of your network infrastructure. Microsoft has done a great job of allowing administrators to secure deployments with an easy-to-use interface and a helpful set of wizards to facilitate application publishing.

Once you have decided that ISA Server 2006 should be a part of the network infrastructure, you must decide where and how you will deploy it. As a firewall product, ISA Server 2006 fits nicely into any of the three firewall deployment scenarios mentioned earlier; edge, multi-homed, or back-to-back. When a SharePoint site is published to the Internet using ISA, it is protected because the true name and IP address of the SharePoint server are never exposed to the external, requesting user. Users will submit their requests to the ISA server which, in turn, will authenticate the user if necessary and then forward the request to the SharePoint server. 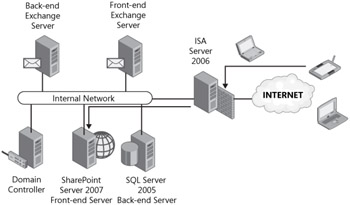 Many large companies have already invested time, money, and manpower in building a secure network environment around the back-to-back firewall configuration. This does not preclude them from needing or wanting to use ISA Server 2006 in their infrastructure. As shown in Figure 19-5, ISA Server 2006 can slip nicely into an existing perimeter network. 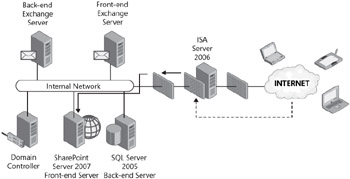 Figure 19-5: ISA Server 2006 as a compliment to an existing firewall configuration

This configuration minimizes the changes that are needed on the internal and external firewalls but adds all of the elements of security that ISA provides. All resources can now remain on the internal network. ISA Server 2006's reverse proxy features will introduce a "you wait and I'll go get it" method of handling traffic. ISA will receive the initial request as the internal firewall has allowed the passing of the traffic to ISA. ISA can then authenticate the user and proceed to retrieve the content on behalf of the authenticated user.

Another common practice in IT security is to deploy firewalls from different vendors in the front-end and back-end solution. If such is the case, it makes great sense to install ISA Server 2006 as the internal or front-end firewall, as shown in Figure 19-6. 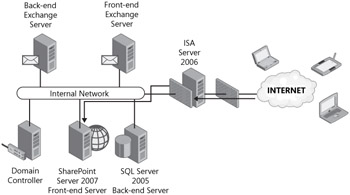 From small, low-budget organizations to large, well-funded organizations, there is a firewall deployment right for every situation. Whether it be a single firewall, multiple firewalls, third-party devices, or ISA, planning your infrastructure to support the publication of SharePoint data is a must.