The standard sequence of events is to construct a System by drawing a system diagram using System Designer, and then evaluate that system against a logical datacenter using Deployment Designer. We describe that sequence of events in detail in the section "Defining and Deploying Systems."

There is a quick way to get started, which is to define a default deployment directly from Application Designer. We'll discuss that first, but keep in mind that this technique is intended only to allow for a quick evaluation of your deployment and, in this case, as a convenient way to introduce the concepts.

With the StockBroker application diagram (StockBrokerApplicationDesign.ad) open, you can right-click an unpopulated region of the diagram and choose Define Deployment. You will be prompted for a logical datacenter diagram to deploy against, and you should choose the diagram StockBroker Datacenter .ldd, as shown in Figure 4-2. 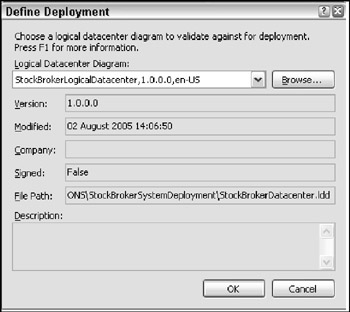 The result will be a new deployment diagram with a default name like DefaultSystem1.dd, shown in the Solution Explorer within the Default System folder. Displayed, the diagram will look like what is shown in Figure 4-3. 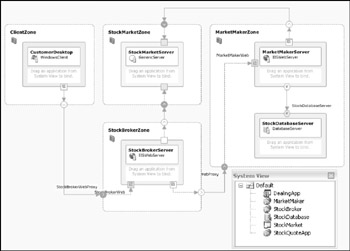 That diagram looks rather like the logical datacenter diagram itself, doesn't it? If you look closely, however, you'll see that each server representation contains the instruction "drag an application from System View to bind," which is exactly what you'll do next.

The System View should appear automatically, and will provide the following list of applications grouped under the heading Default, which is the name of the default system into which the applications have been grouped:

You will learn later how applications can be grouped more logically into systems of your choice, with names that are more meaningful than "default."

Given a deployment diagram (refer to Figure 4-3) and a set of applications grouped into systems (described previously), you can set about mapping the applications onto the servers. This mapping process is called binding and is performed simply by dragging applications from the System View onto the servers that will host them.

In general, logical servers may host applications as follows:

You can try out the binding process by dragging the applications onto the servers according to the following scheme:

When all of the applications have been bound, you will end up with what is shown in Figure 4-4. 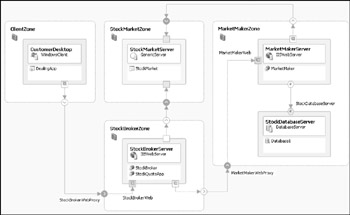 In our list of bindings, we indicated the binding between the StockDatabase and the StockDatabaseServer as optional because you won't be able to perform that binding using the supplied files without first creating an ExternalDatabase in Application Designer. We have shown that binding in Figure 4-4, however, for completeness.

As you experiment with Deployment Designer, you will find that in some cases you are prevented from binding an application to a server. This will be indicated by the cursor changing to a no-entry symbol and a message "Bind application to a compatible logical server."

If this occurs, you will have to check the compatibility of the applications and endpoints on your Application Diagram against the zones, servers, and endpoints on your Logical Datacenter Diagram. For example, you might have tried to bind a web application onto a server that is not an IISWebServer, or which does not have a WebSiteEndpoint. Or you might have used the Settings and Constraints Editor to constrain a web server to allow only external Web services to be hosted.

Validation errors, if any, will be displayed in the Error List window. You can double-click a validation error in the error list to navigate to the setting that violates the constraint.

For demonstration, you can cause a validation error by following these steps:

You will see the following validation error:

Obviously, you can fix it by rechecking the WebServiceEndpoint constraint of the StockBrokerWeb endpoint in the Settings and Constraints Editor.

You can cause further validation errors simply by not binding some of the applications from the System View, as shown in the following example:

Having described how to create a default deployment directly from an application design, we will describe how to define systems as groups of applications for deployment. What's the difference?

Microsoft's specific advice is as follows:

With that in mind, we'll now demonstrate how to define systems explicitly.