Because we're presenting two designers in this chapter, the following sections introduce each one, with a particular emphasis on the coupling between the two.

In Visual Studio 2005 Team Edition for Software Architects, a system is a deployment unit comprising a number of applications (from Application Designer) and/or previously defined subsystems. The embedding of systems within systems enables large-scale distributed system scenarios to be defined as a hierarchy of nested systems.

Validation also ensures that communications pathways exist and are compatible between applications and servers.

Finally, a deployment report may be generated in human-readable format, or in XML as a feed to automated deployment scripting tools. The Deployment Report describes all the required application and datacenter configuration settings.

The System Designer toolbox does not play as big a part in constructing diagrams as do the Application Designer and Logical Datacenter Designer toolboxes. It contains only two items: Comment and Connection. There are no prototypes because systems are composed of existing applications taken from the application design, so aside from establishing connections there is no need for toolbox items.

The System View (see Figure 4-1) provides the set of applications that you can drag onto diagrams in order to compose systems, so in that respect the System View acts as a kind of toolbox for System Designer. 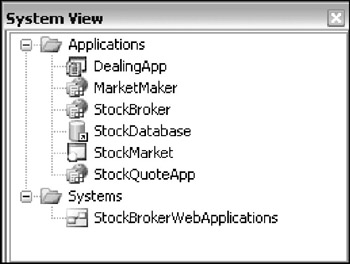 In the case of Deployment Designer, it is also meaningless to show a toolbox comprising prototypes from which diagrams are created. Deployment diagrams are based entirely on existing logical datacenter diagrams, onto which applications are bound by dragging them from the System View.