Defining a Logical Datacenter for the StockBroker Applications

Figure 3-2 was provided as a gentle introduction to logical datacenter design, based on a real-life data-center described in terms of zones, servers, and connections. Now we'll devise a logical datacenter against which we can validate the deployment of the StockBroker running example that was designed using Application Designer in Chapter 2. For this one, we'll tell you how to draw the diagram yourself and then we'll use it to introduce some more advanced ideas.

First, you need to add a Logical Datacenter Diagram to your solution, which you can do by right-clicking the solution in Solution Explorer and choosing Add

In the preceding chapter, we suggested that the MarketMaker application would most likely be an external application. Though technically outside our control, we have created a representation of that application within the application design and we need to show it hosted somewhere.

We'll create a zone named MarketMakerZone containing a server named MarketMakerServer. Let's be clear that as a third-party hosted application, the server and zone in which it is hosted would really be outside our control, but from an operational point of view we'll need to understand—or indeed specify—the constraints of that hosting if we are to be able to connect to the application. 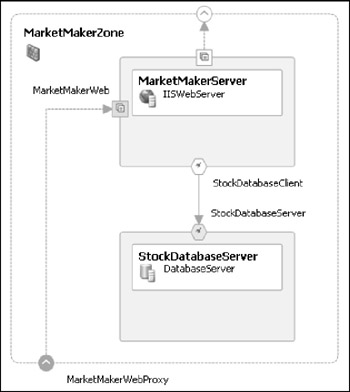 Figure 3-4 demonstrates that a zone may include one or more servers—in this case, a database server as well as a web server.

To draw the MarketMakerZone, first drag a zone prototype from the toolbox onto the diagram. Initially it will have one incoming endpoint and one outgoing endpoint, as indicated by the arrows. It will also have a default name—such as Zone1—that you can change to MarketMakerZone.

What you've just done is indicate that clients can communicate with the MarketMaker IISWebServer through the zone via HTTP.

You've now enabled direct communication between the MarketMaker web server and the StockDatabase database server within the zone, not from outside the zone. The only communication allowed into the zone from the outside is HTTP.

To complete this picture, you can connect the spare consumer endpoint of the MarketMaker server to the spare outgoing zone endpoint. This shows that we'll be communicating from the MarketMaker server, out through the zone, via HTTP. Although it's not crucial for this design, for completeness we'll be showing how this server may ultimately become a client of the StockMarket server, described next.

Your result should match what is shown in Figure 3-4.

For the StockMarket zone, we'll adopt the same rationale we used for the MarketMaker zone. While the StockMarket application—which we modeled as a generic application in Application Designer—will be outside of our control, we'll allocate a zone to it and specify the characteristics of that zone in order to complete the infrastructure picture. 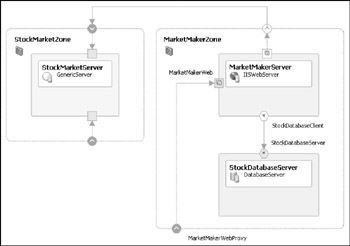 We'll anticipate that this server will accept two kinds of incoming communications:

Drawing the StockMarketZone is much simpler than the previous example. The steps to complete the drawing of that zone are as follows:

We won't display the endpoint labels on this zone and server, or rename them, because—to be frank—our knowledge of the StockMarketServer is sketchy and we're only showing this server and zone for illustration and to complete the overall picture. The minimum we need to show is that there will be some kind of generic server, located within its own zone and accepting connections from two other zones: the MarketMaker zone (described previously) and the StockBroker zone (described next).

Your result should match Figure 3-5.

Finally, the StockBroker server will accept incoming Web services requests as HTTP via a WebSiteEndpoint named StockBrokerWeb, the clients of which we have not yet specified (see Figure 3-6). 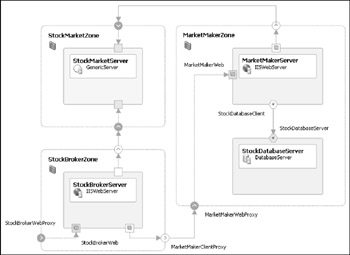 The steps to complete the drawing of the StockBroker zone are as follows:

Your result should match Figure 3-6. 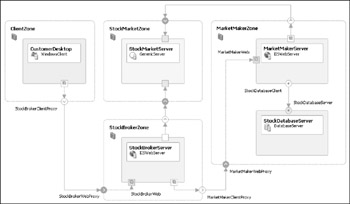 That completes the picture of our Logical Datacenter.

You should be able to draw the Client zone easily by now. The final steps to complete this logical data-center diagram are as follows: