As mentioned previously, Team Foundation Server manages most of its own security groups. (The exceptions being security for Windows SharePoint Services and SQL Server Reporting Services.) And just as with Team Build in the previous chapter, you have the option of managing security from the user interface or by using the command-line tools.

As mentioned earlier in this chapter, there are two levels of groups: global and project. You use nearly identical steps in creating a new group for either. 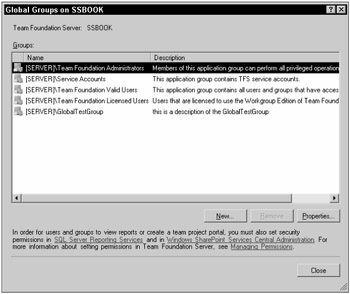 To create a new project group, open Team Explorer and right-click the Team Foundation Server project you are interested in. From the context menu that opens, select Team Project Settings, and then Group Membership. This opens the Project Group Membership window, shown in Figure 4-2. 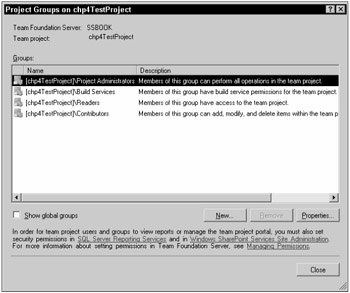 As you can see, both windows appear very similar. In the Project Group Membership window, there is a check box called Show Global Groups. You can choose to view or hide the Global groups in this window, depending on whether the box is checked.

Both windows work the same way. To create a new group, click New. This opens the Create Team Foundation Server Group window, as shown in Figure 4-3. 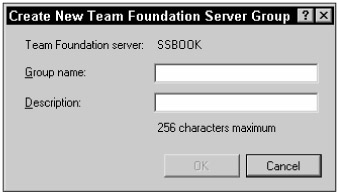 Once this window opens, you can enter your new group name and description. As an example, let's create a Global group called MyGlobalGroup. Enter MyGlobalGroup as the group name, and I am a test group on the global level as the description; then click OK. This returns you to the Project Group Membership window, where your new group now appears, as shown in Figure 4-4. 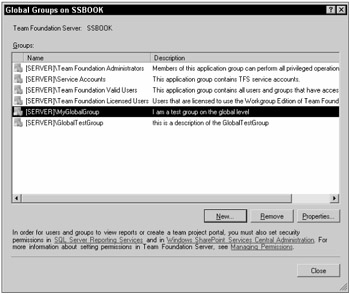 To create a new global group, you use the /gcg parameter:

To display a list of all the global groups, use the /g parameter

Figure 4-5 shows the output, which is a list of all the global groups:

You can see the new group you just created is displayed.

To create a new project level group you use the /gc parameter. Here is the syntax:

Scope is the URI (Uniform Resource Indicator) of the team project you want to create the group in. GroupName is the new group name, and GroupDescription is the optional group description. To find the URI, open Team Explorer, right-click the Team Project, and select Properties. This opens the Properties window. Under the Misc section is a property names URL. This is the URI of the team project, and will be in a format similar to this: vstfs:///Classification/TeamProject/. So to add a new project group, called TestCmdGroup, to the chp4TestProject Team Project, you would run the following code: 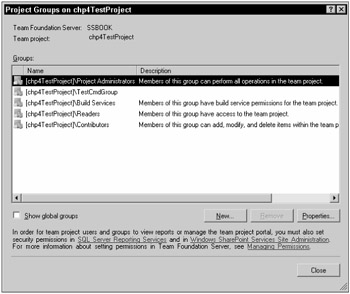 You now have a new group, called TestCmdGroup, added to your project. Next, you need to add some users to this group. Open the Project Group Membership window as discussed in the previous section. Select TestCmdGroup, and click the Properties button. This opens the Team Foundation Server Group Properties window, as shown in Figure 4-7. 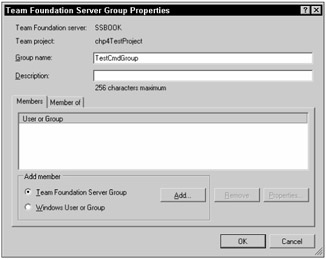 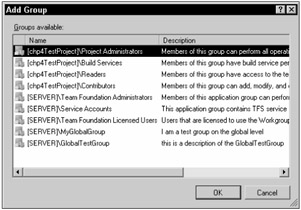 From this window, you just select the group you want to add, and click OK.

To add a Windows user or group, select the appropriate options and click Add. This opens the Select Users or Groups window, as shown in Figure 4-9. 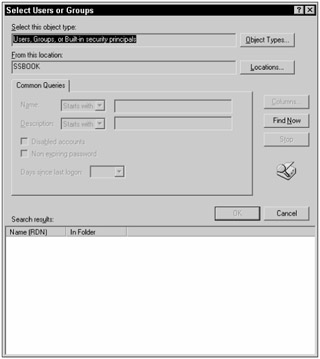 Using this window, you can find the users or groups you want to add from your Windows domain or workgroup.

To add users to a global group, you follow the same steps as listed previously, except you open the Global Group Membership window to begin with.

To remove a user, open the Team Foundation Server Group Properties window, as described previously. Select the user or group you want to remove, and click the Remove button.

Again, you use the TFSSecurity application to add users to groups using the command line. The general syntax for adding a user is:

To specify identity, you use the n: identity specifier. The syntax is n:[domain\]name. For project groups, the domain is the Team Project name, and the name is the display name of the group. If the domain is omitted, it is assumed you are referring to a global group.

Adding a new user to a global group is easy. Let's say you want to add the user Developer1, located in the VSTS domain, to your new global group MyGlobalGroup, that you created previously. You would use the following syntax:

To add Developer1 to your new project group, TestCmdGroup, you would use the following code:

You can use many other options with TFSSecurity, such as deleting and renaming groups, and removing users from groups. See the online help (http://msdn2.microsoft.com) for more information.

Using the GUI to Set Security Permissions for Groups

So far, we have talked about how to create new global and project level groups, and how to add users to those groups. The groups don't do you any good though, if they don't have any security permissions assigned to them. Remember from the earlier discussion that if a group is not set to explicitly allow a security permission, then the system defaults to denying access to that permission. 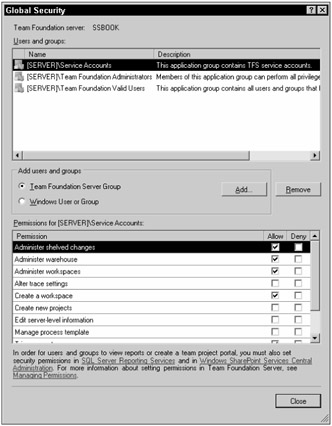 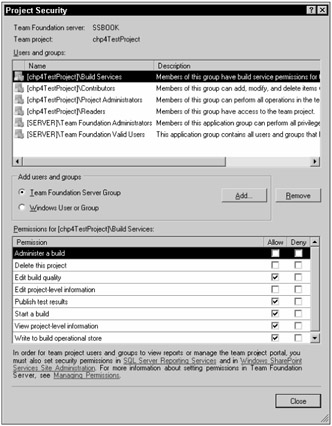 Notice the new project groups you created earlier are not listed here. You will need to add them, using the Add button. Once you have added them, you can enable the group permissions as needed. Clicking the Close button will save all your changes.

For any of the permissions that deal with the version control system, use the version control commandline utility, tf.exe. This utility is located in the Program Files\Microsoft Visual Studio 8\ Common7\IDE directory on any machine on which Visual Studio Team System is installed. All the permissions listed in the Version Control table earlier in this chapter can be set with this utility. In addition, the following global permissions can be set with it as well:

The general syntax for using the tf.exe utility is:

There are a variety of commands that can be used, all of which are documented in the online help (http://msdn2.microsoft.com).The command you are interested in for this section is the Permission command. For example, to give your global group, MyGlobalGroup, the ability to read from the root of the version control system, use the following code:

You can also use wildcards if you like. Let's say you wanted to give your project level group, TestCmdGroup, Allow rights for all the version control permissions for the chp4TestProject. You could run the following code:

There are a variety of options that can be used with the Permissions command, including /allow, /deny, /group, and /user, just to name a few. The online helps lists in detail all these options and how to use them.

The following is a list of possible options to use with the Permissions command. The online help lists details on all these options and how to use them.

For all other permissions, you need to use the TFSSecurity.exe utility, which was touched on earlier in the chapter.

Managing Security for Other Areas

We have discussed how to set permissions on global groups and project groups, but you have not been shown how to set version control permissions or work item tracking area level permissions yet. The next two sections touch on those topics. 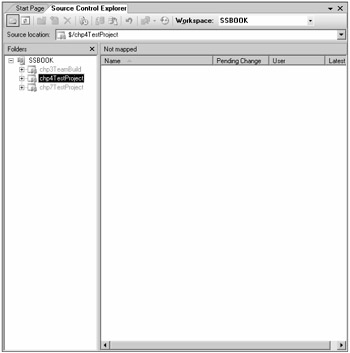 Once you have the Source Control Explorer open, you can set security permissions from the server level all the way down to individual files in particular projects. You can control how granular you need to get, depending on your situation. You need to develop some sort of guidelines of how your team is going to work the version control permissions, and what level of granularity you are going to enforce them at. If everyone on the team has the ability to change these settings to any level they want, this could lead to an administrative nightmare.

To modify the security permissions, right-click the file or folder you want to modify, and select Properties. This opens the Properties window. Click the Security Tab on that window, as shown in Figure 4-13. 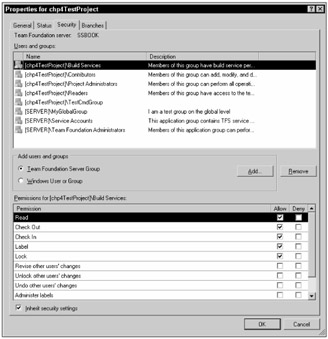 All Work Item Tracking Areas permissions can be set at the command line, using the TFSSecurity.exe tool. As you would expect, just as there was for Version Control, there is a graphical interface for this as well. 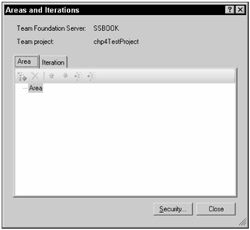 Select the area on which to modify security, and click the Security button. This opens the Area Node Security window, shown in Figure 4-15. 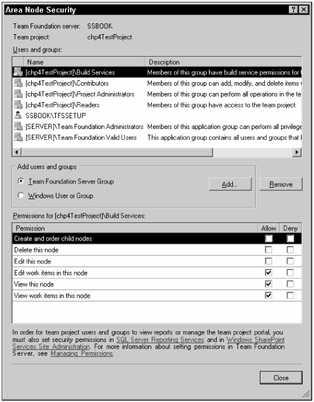 Have you noticed how all these security windows look the same? As you can guess, you use this window just like you do all the others.