These days, networking is part of daily life. Whether you are sending e-mail from your desktop PCs or using the Internet for shopping, networking is at the heart of it. In fact, there are a number of different types of network:

To facilitate communication across these networks, you have protocols . A protocol is a standard language by which two (possibly dissimilar) systems can communicate. For example, TCP/IP is the protocol that allows different machines to participate together to make the Internet work.

This chapter discusses some of these applications and helps you to get your Linux machine acting as a full-fledged network server.

Why Is Linux Good for Networking?

One of the most significant factors in choosing the hardware and software for a network is the total cost of ownership (TCO) . This is the cost of purchase, setup and configuration, and maintenance. If you sit down and analyze the requirements of different parts of network architecture, you ll quickly find that the free, open nature of Linux systems lends itself better to some parts of a network than others.

Linux is a particularly good choice for supporting network applications (such as file servers, Web servers, and mail servers):

Linux is also great for services that can be replicated (for example, DNS). You can configure such machines cheaply, and replicate them. Then, if one machine fails, it should be possible to replace it cheaply. In the meantime, the replicate servers keep on working to provide the service.

By contrast, Linux is not a common choice for basic infrastructure, such as routers, hubs, and switches. While Linux is capable in this area, it s desirable only when the low cost of PCs is the major selection criteria. In a more business-critical role, where reliability will count for more than minimum purchase price, dedicated hardware is still the most popular choice.

You can find more information about TCO comparison between Fedora 2 and other UNIX flavors at www.redhat.com/whitepapers/services/tco.pdf .

In the demonstrations in this chapter, we ve used a network setup that may not be the same as your own environment. You can choose your own server, connectivity devices (switch, hub, and direct cable connection), IP address scheme, and hostname to set up networking in a way that suits your own requirements. This section notes the network settings that we ve used. To facilitate, an explanation of the terms used follows .

The network topology refers to the shape or layout of the network. It defines how different systems in a network are connected and communicate with each other. The ideal topology of a network depends on the size of the network, the requirements of its users, and the policies of the company or organization. 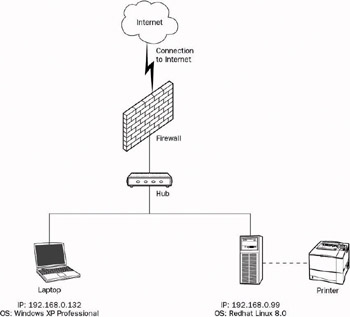 This diagram shows a client machine (in the form of a Windows 2000 Professional laptop), and a server (running Fedora 2, and supporting some of the services described in this chapter. They are connected via an internal network, and protected from the Internet by a hub and a firewall.

Your network topology might look different. For example, if you have a smaller network, it s possible that you don t have a hub, and that your firewall is not a dedicated machine but a piece of software hosted by your Linux server machine. If you have only a single machine, it can double as both the server and client machines in this diagram (being a client of its own services).

Note that both the user s laptop and the server machine have been assigned an IP address ”this is used to uniquely identify the computer (or other device) within a TCP/IP network. An IP address is a 32-bit binary address in the form of four decimal values. Each of these four decimals represents an 8-bit value (an octet), and is in the range 0 to 255. This format is known as dotted quad notation .

In fact, the TCP/IP network is divided into different class networks. The important classes are defined in the following table.

The TCP/IP networks can also be divided by public and private IP addresses:

A netmask is a 32-bit string that hides the network part of an IP address, so that only the host (computer) part of the address remains. For example, the netmask 255.255.255.0 looks like an IP address, but in fact hides the first 24 bits of the IP address so that only the last 8 bits remain (recall that 255 is the decimal representation of the binary 11111111). The netmask 255.255.255.0 is commonly used for Class C IP addresses to reveal the specific host computer address publicly .

The following definitions will also be useful here:

With all that in mind, let s return to those two machines on our sample network ”the Fedora 2 server machine and the Windows 2000 client laptop machine. Following are the network configuration settings we used for those two machines in this chapter.

The Fedora 2 server machine is set up as a firewall and router, and has Internet connectivity. Over the course of the chapter we ll show how it can be configured as a File server, Print server, DHCP server, FTP server, Web server, or Mail server.

The laptop is a simple client machine, designed for a user and ( potentially ) sharing resources with other similar machines on the network.

As we ve said, your network topology, and the network configuration of your machine(s), may be different; but many of the principles in this chapter remain the same, and you should be able to get any of these services going regardless of your own environment.