Services on a Linux system are daemon processes; that is, they are alive throughout the time that the system is up and running. Typically, services are configured to start at boot time. Super users may disable a service or start one. Examples of services are telnet, ftp, rlogin, and so on. Services may be managed from the Start menu System Settings>Server Settings>Services (see Figure 2-49). 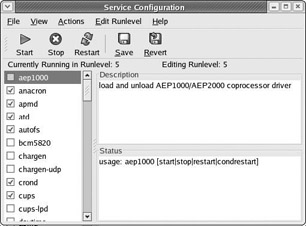 When the computer starts up, the operating system loads and starts off the first process ”the init process. The init process then starts off any required subprocesses before the computer is ready to be used by the user . The processes that the operating system needs to start off after the booting process are specified using run levels . A run level is a state of the machine that determines the processes to be run.

The following describes the seven run levels, numbered from 0 to 6:

You can find the computer s present run level by using the program runlevel . This outputs two numbers , which represent the previous and current run levels.

You can change the current run level using the telinit program. This program needs to be executed as root, and takes a single argument ”the run level to boot to. For example, to reboot the system you can execute the command telinit 6 .

Additionally, run levels and the processes that are part of a run level can be managed from the Services menu discussed previously in this chapter.