A more subtle but equally important purpose of the MPI communicator involves the communication context that each communicator contains. This context is essential for writing software libraries that can be safely and robustly combined with other code, both other libraries and user-specific application code, to build complete applications. Used properly, the communication context guarantees that messages are received by appropriate routines even if other routines are not so careful. Consider the example in Figure 9.8 (taken from [48, Section 6.1.2]). In this example, two routines are provided by separate libraries or software modules. One, SendRight, sends a message to the right neighbor and receives from the left. The other, SendEnd, sends a message from process 0 (the leftmost) to the last process (the rightmost). Both of these routines use MPI_ANY_SOURCE instead of a particular source in the MPI_Recv call. As Figure 9.8 shows, the messages can be confused, causing the program to receive the wrong data. How can we prevent this situation? Several approaches will not work. One is to avoid the use of MPI_ANY_SOURCE. This fixes the example, but only if both SendRight and SendEnd follow this rule. The approach may be adequate (though fragile) for code written by a single person or team, but it isn't adequate for libraries. For example, if SendEnd was written by a commercial vendor and did not use MPI_ANY_SOURCE, but SendRight, written by a different vendor or an inexperienced programmer, did use MPI_ANY_SOURCE, then the program would still fail, and it would look like SendEnd was at fault (because the message from SendEnd was received first). 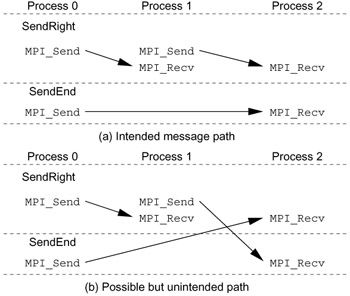 Another approach that does not work is to use message tags to separate messages. Again, this can work if one group writes all of the code and is very careful about allocating message tags to different software modules. However, using MPI_ANY_TAG in an MPI receive call can still bypass this approach. Further, as shown in Figure 6.5 in [48], even if MPI_ANY_SOURCE and MPI_ANY_TAG are not used, separate code modules still can receive the wrong message.

Enabling the development of libraries was one of the design goals of MPI. In that respect MPI has been very successful. Many libraries and applications now use MPI, and, because of MPI's portability, most of these run on Beowulf clusters. Table 9.1 provides a partial list of libraries that use MPI to provide parallelism. More complete descriptions and lists are available at www.mcs.anl.gov/mpi/libraries and at sal.kachinatech.com/C/3. Chapter 12 discusses software, including MPI libraries and programs, in more detail.