Let's now look at how a typical application using Spring is organized, and the kind of architecture Spring promotes and facilitates.

Let's now look at how a typical Spring architecture looks in practice, from top to bottom.

Figure 1-1 illustrates the architectural layers in a typical Spring application. Although this describes a web application, the concepts apply to most logically tiered applications in general. 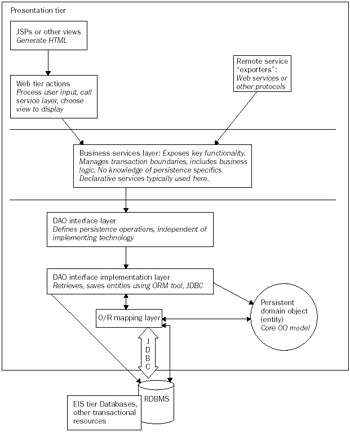 Let's summarize each layer and its responsibilities, beginning closest to the database or other enterprise resources:

In a J2EE application, all layers except the EIS tier will run in the application server or web container. Domain objects will typically be passed up to the presentation layer, which will display data they contain, but not modify them, which will occur only within the transactional boundaries defined by the business services layer. Thus there is no need for distinct Transfer Objects, as used in traditional J2EE architecture.

In the following sections we'll discuss each of these layers in turn, beginning closest to the database.

Getting data access right is crucial for success, and Spring provides rich services in this area.

Most J2EE (or Java applications) work with a relational database. Ultimately data access will be accomplished using JDBC. However, most Spring users find that they do not use the JDBC API directly.

Spring encourages a decoupling of business objects from persistence technology using a layer of interfaces.

In keeping with the philosophy that it is better to program to interfaces than classes, Spring encourages the use of data access interfaces between the service layer and whatever persistence API the application(or that part of it) uses. However, as the term Data Access Object (DAO) is widely used, we continue to use it.

By using a distinct layer of DAO objects, and accessing them through interfaces, we ensure that service objects are decoupled from the persistence API. This has many benefits. Not only is it possible to switch between persistence tools more easily, but it makes the code more coherent through separation of concerns and greatly simplifies testing (a particularly important concern when using an agile process). Imagine a business service method that processes a set of orders: If the set of orders is obtained through a method on a DAO interface, it is trivial to supply a test DAO in a JUnit test that supplies an empty set or a particular set of orders, or throws an exception — all without going near a database.

DAO implementations will be made available to objects using them using Dependency Injection, with both service objects and DAO instances configured using the Spring IoC container.

DAO interfaces will typically contain the following kinds of methods:

The following interface shows some of the methods on a typical DAO interface:

This interface might be implemented using Hibernate, with Spring's convenience classes, as follows (some methods omitted for brevity):

An implementation using another O/R mapping tool, such as TopLink, would be conceptually almost identical, although naturally using a different underlying API (but also benefiting from Spring conveniences). Following the DAO pattern as facilitated by Spring and illustrated in Spring sample applications such as the Spring PetStore ensures a consistent architectural approach, whatever the chosen persistence API.

Our DAO interface could be implemented using Spring's JDBC abstraction as follows:

Don't worry if you don't understand the details at this point: we'll discuss Spring's persistence services in detail in Chapter 5, "DAO Support and JDBC Framework." However, you should be able to see how Spring eliminates boilerplate code, meaning that you need to write only code that actually does something.

Persistent domain objects are objects that model your domain, such as a bank account object. They are persisted, most often using an O/R mapping layer.

Spring allows the application of Dependency Injection to persistent objects, using classes such as DependencyInjectionInterceptorFactoryBean, which enables Hibernate objects to be automatically wired with dependencies from a Spring IoC container. This makes it easier to support cases when domain objects might need, for example, to use a DAO interface. It allows this to be done simply by expressing a dependency via a setter method, rather than relying on explicit "pull" configuration calls to Spring or implementing persistence framework–specific lifecycle methods. (Another, more general, approach to this end is to use a class-weaving AOP solution such as AspectJ.) However, we advise careful consideration before allowing domain objects to access the service layer. Experience shows that it is not usually necessary in typical applications, and it may represent a blurring of the clean architectural layering we recommend.

Domain objects are typically persisted with an O/R mapping product such as Hibernate or a JDO implementation.

In certain cases, full-blown O/R mapping may be inappropriate. In this case, the DAO interfaces remain appropriate, but the implementation is likely to use JDBC — through Spring's JDBC abstraction layer, or through iBATIS SQL Maps.

In some applications — and some use cases in nearly any complex application — Spring's JDBC abstraction may be used to perform SQL-based persistence.

Depending on your chosen architecture, much of your business logic may reside in persistent domain objects.

However, there is nearly always an important role for a service layer. This is analogous to the layer of stateless session beans in traditional J2EE architectures. However, in a Spring-based application, it will consist of POJOs with few dependencies on Spring. The Service Layer provides functionality such as:

As with the DAO interface layer, the business service layer should expose interfaces, not classes.

In the recommended architecture using Spring, the presentation tier rests on a well-defined service layer.

This means that the presentation layer will be thin; it will not contain business logic, but merely presentation specifics, such as code to handle web interactions.

It also means that there can be a choice of presentation tiers — or more than one presentation layer — in an application, without impacting lower architectural layers.

In a Spring application, a web tier will use a web application framework, whether Spring's own MVC framework, or an alternative framework such as Struts, WebWork, Tapestry, or JSF.

The web tier will be responsible for dealing with user interactions, and obtaining data that can be displayed in the required format.

The web tier will normally consist of three kinds of objects:

This triad is often referred to as an MVC (Model View Controller) architectural pattern, although such "web MVC" is not the same as the "classic" MVC pattern used in thick client frameworks such as Swing.

Spring's own MVC framework provides a particularly clean implementation of these three elements — the base interfaces have the names Controller, Model, and View. In particular, Spring MVC ensures that not only is the web tier distinct from the business services layer, but web views are completely decoupled from controllers and models. Thus a different type of view can be added without changing controller or model code.

Spring provides a variety of remoting choices, based on exposing POJOs. This is less invasive than traditional J2EE EJB remoting, but it's important to remember that there are inevitable constraints around remoting, which no technology can wholly conceal. There is no such thing as a distributed object. Remoting introduces a range of concerns: not merely the need for serializability, but the depth to which object graphs should be traversed before disconnection, constraints on method granularity ("chatty" calling is ruled out for efficiency reasons), and many other issues.

If you wish to use a traditional EJB-based remoting architecture, you can use one or more Spring contexts inside the EJB container. In such an architecture, EJBs become a facade layer. (They may also be used for transaction management, although Spring's own transaction management is more flexible, and a better choice in Spring-based applications, even when using JTA.)

In such an architecture, we recommend that Transfer Objects and the other paraphernalia of remoting are added on top of the basic architecture, rather than used throughout it.

Another important presentational choice is the Spring Rich Client Project (Spring RCP). This is a framework built around the Spring IoC container that facilitates the building of Swing applications. The use of Spring on the client side is especially compelling when it is necessary to access enterprise services, which are typically remote, as Spring's client-side, as well as server-side, remoting features may be used.