The DataGridView control is used on Windows Forms applications to display data in a tabular, rows-and-columns format. Earlier grid controls were difficult to customize without diving deep into Windows handles and messages, but the DataGridView object exposes more than 160 events to make it much simpler to access the key area of the grid. 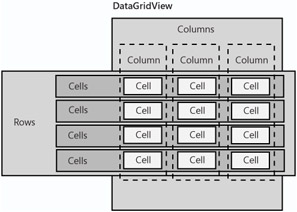 Figure 7-1: The basic structure of the DataGridView object 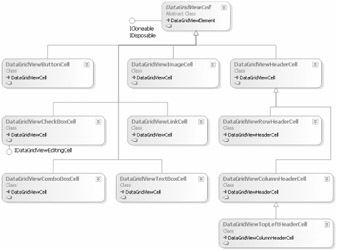 You can use the CellFormatting event to control the style programmatically. The benefit is that you can apply business rules to specify whether a cell should stand out from other cells (for example, making the negative "quantity on hand" number red, but only when the inventory item sells more than one item per month).

Virtual mode allows you to control the DataGridView object's interaction with your data cache. The primary benefit of virtual mode is that you can implement just-in-time data loading when you have large amounts of data to make available to the user but the user can select the data to be viewed. In other words, rather than filling a DataSet object with a couple of gigabytes of data, you can simply populate the DataSet with the data that is necessary when the user's interaction causes a request for specific data.

Binding to a Data Source

The DataGridView can be easily bound to a data source at design time; Visual Studio will read your data source and populate the columns collection. You can select or create the data source by using the Choose Data Source dialog box.

The data source can be one of the following:

The DataGridView object attempts to minimize resource usage by sharing DataGridViewRow instances wherever possible. A row can be shared if the state of all of its cells can be determined based on the state of the rows and columns that contain the cells. The state of a cell refers to a cell's appearance and behavior, which is typically derived from the column and row that the cell belongs to. Changing the state of a cell at the cell level so that its state cannot be determined via the row and column it belongs to causes a shared row to become unshared.

Here are some reasons that one or more rows can be unshared or can become unshared.

Before working with a DataGridView object, you must configure a DataSource. For example, you can configure a DataSource by including a database in your project. When the Northwind database is added to the project, the Data Source Configuration Wizard starts. The first page prompts for the list of tables, views, functions, and stored procedures that should be included in the DataSource. Figure 7-3 shows all of the tables being selected except the sysdiagrams table because the sysdiagrams table holds metadata that is used by the database diagram tool. Also notice that the name of the DataSet to be created has been changed from northwindDataSet to NorthwindDs. 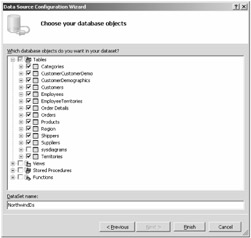 Figure 7-3: To set up the Northwind DataSource, you simply add the Northwind database to the project, which will start the Data Source Configuration Wizard.

After you create the DataSource, you can simply drag and drop the Employees table onto the form, which will add a DataGridView object to the form. The other objects that have been added to the form are as follows. These objects are shown in Figure 7-4. 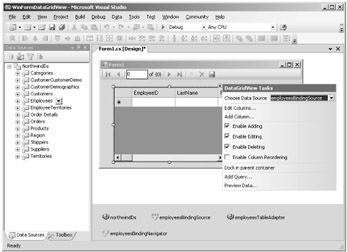 Figure 7-4: These objects are added to the tray when the Employees table is dragged onto the form.

A cell can generate many events, which are bubbled up to the DataGridView object. These events substantially increase the flexibility of the DataGridView over data grid controls of the past. Table 7-1 lists the available cell events. 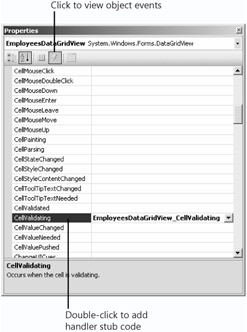 Here are the events that take place when a cell is entered (the Current Cell) and edited, and then another cell is clicked (the Next Cell).

Now that you have a table of the cell events (Table 7-1) and the preceding sequential list of events, you can code the necessary event handlers to customize the DataGridView object. For example, if you want to keep a user from changing from one cell to another when the user does not enter an appropriate value into the first cell, you can set the Cancel property to true in the CellValidating event handler, as shown in the following code snippet.

When the code is run and the user attempts to change the last name to an empty string or a string that consists of spaces, the Cancel property will be set to true and the user will not be allowed to leave the cell. Notice that the events will take place in the following order.

You can see that the CellLeave event fired, and after CellValidating set the Cancel property to true, the CellEnter event fired as the user was placed back into the cell. 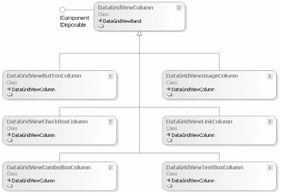 The DataGridView designer lets you add and remove columns by using the Edit Columns dialog box. You can also populate the columns collection at runtime using your own code.

Probably the most common event you will be interested in is the CellContentClick event, which fires when the user clicks in the CheckBox to change the selected state. 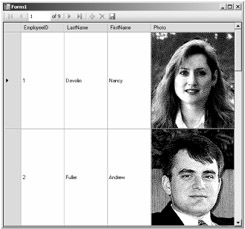 Figure 7-7: The Employees table contains a Photo column that can be rendered using the DataGridViewImageCell.

Loading a New Image into the DataGridViewImageCell from a File The DataGridViewImageColumn easily displays an image, but if you want to replace the image with a new image, or if you are adding a new employee, you'll need to add some code to get the ability to replace the image. Using the current example project as shown in Figure 7-7, add a Context-MenuStrip to the form and set its Name property to PhotoMenu. Next, add a menu item and set the Text property to "&Insert Photo From File". Assign the PhotoMenu to the ContextMenuStrip property of the Photo column.

Add an event handler for the click event of the "&Insert Photo From File" menu item. Add the following code, which prompts the user for an image file and loads it.

Most of this code simply sets up the dialog box to prompt for an image file. The file is loaded into a new Bitmap object, and the Bitmap object is assigned to the currentPhotoCell object's Value property.

The only problem with this code is that the currentPhotoCell variable has not been set. You can make currentPhotoCell point to the cell that was right-clicked, by adding an event handler for the CellContextMenuStripNeeded event of the employeesDataGridView object and adding the following code.

Run the project and right-click a photo, which will display the shortcut menu. Click the "Insert Item From File" menu item. Select an image file on your computer and click OK. The image will load into the cell as shown in Figure 7-8. Be sure to click the Save Data icon to store the new image into the database. 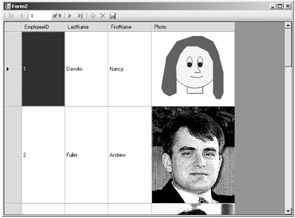 Figure 7-8: You can upload images to the DataGridView with a bit of code.

Saving an Image from the DataGridViewImageCell to a File To save an image that is in a DataGridViewImageCell object to a file, you can add a bit more code to your project. For starters, add another menu item to the PhotoMenu object and set its Text property to "Save Photo to File". Add a click event handler and add the following code.

There is a small problem with the employee photos that are embedded in the Northwind database. These photos were originally in a Microsoft Access database, which stored the photos with an OLE header. The OLE header occupies the first 78 bytes of the image byte array. If you want to save these as reuseable images, you need to strip off the OLE header. That's OK, but in the previous section, I showed you how to insert new images that were saved to the database into the DataGridView object. This means that some images may have the OLE header, while others don't, so you need a means for determining whether the OLE header exists. As it turns out, bytes 20 through 31 (12 total bytes) will hold the string "Bitmap Image" if the OLE header exists.

With that information, let's see what this code is doing. First, constants are declared that relate to the OLE header information. Next, a byte array variable called imageBytes is created to simplify access to the value that is in the currentPhotoCell. The imageBytes variable is tested to see if it contains an image. If it does not have an image, there is no need to go further.

The code then prompts the user to enter a filename. Notice that you have the option to save the image as a GIF, BMP, or JPG file, even if the image was originally stored in a different format. By the way, the original employee photos are in BMP format.

This code then looks for the "Bitmap Image" string, and if it exists, the OLE header will be stripped by creating a MemoryStream object from the imageBytes, starting at the OLE header offset. 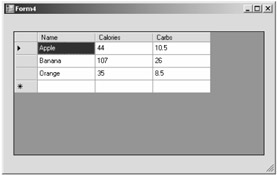 Figure 7-9: The DisplayStyleForCurrentCellOnly is set to false in the CustomerID column and is set to true in the EmployeeID column.

The CellClick fires every time the user activates the drop-down list; the CellContentClick event fires only when the user first clicks in the cell. The CellValueChanged event fires if the user changes the contents of the cell and leaves the cell.

Table 7-3 shows the events that are related to the DataGridViewRow.

You can implement virtual mode by setting the VirtualMode property of the DataGridView object to true and implementing event handlers to populate and edit cells as necessary. In a read-only scenario, the only event that needs to be handled is CellValueNeeded. Table 7-4 shows the other events that are available for use only when virtual mode is enabled.

To keep this example simple, we will work with a Fruit class and a Fruit collection. The Fruit class is shown in the following code snippet.

The following steps are required to implement virtual mode. 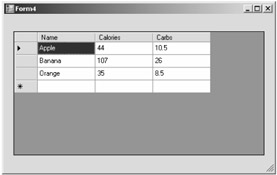 Figure 7-10: The DataGridView object was populated using the CellValueNeeded event.

Code must also be added to commit cell changes back to the fruit list. This requires implementation of the CellValuePushed event and the RowValidated event. These events are implemented as shown in the following code snippets:

The NewRowNeeded event handler fires when you move your cursor into the "*" row, which will create an empty Fruit object that can be edited.

This CellValuePushed event handler fires when you leave a cell, and this handler is responsible for saving a cell value into the appropriate property of the Fruit object that is being edited. This code tests to see if you have just started to edit an existing row, and if you have, the existing row is cloned. The clone is copied over the existing Fruit object when you leave the row, but if you press the Esc key twice, you will be able to cancel all column edits on the row, and the clone will be discarded without being committed.

If you run this code, adding rows and editing rows will appear to work, but more work is needed. To be able to delete rows and cancel edits, you must implement the UserDeletingRow event and the CancelRowEdit event, as shown in the following code.