E-commerce is conceptualized in different ways depending on the scope of the definition of the term. We broadly classify them into (a) non-Internet based e-commerce and (b) Internet-based e-commerce. The non-Internet based e-commerce framework includes traditional means for conducting business transactions, whereby the information transmitted is coded in electronic form. This includes electronic data interchange (EDI), video-conferencing, facsimile, etc. On the other hand, the Internet-based e-commerce is one for which the Internet serves as the medium through which transaction information is transmitted. The latter represents a more generally accepted conceptualization of e-commerce. Thus, e-commerce entails use of the Internet to facilitate trade in goods and services between two or more parties. This definition of the concept is quite pervasive, considering the fact that:

Several models of e-commerce have been developed to represent or formalize the various practices of various entities (e.g., Mahadevan, 2000; Barua et al., 2001). Figure 1 presents a framework that can be used to represent the various types of entities involved. The two major classifications of Internet-based e-commerce that have been articulated are B2C and B2B e-commerce. While B2C e-commerce describes transactions between a company and an individual consumer (e.g., book purchase by a student from amazon.com through its online website), the latter describes electronic transactions between business entities (e.g., reverse auction for the purchase of commodity-type parts from a supplier by an automotive company such as General Motors). 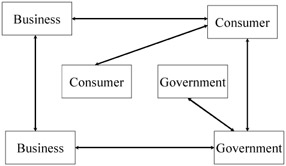 Since transactions among businesses typically involve a lot more issues than simply buying and selling (e.g., issues relating to quality validation, product development and design, forecasting, and logistics, etc.), e-commerce is sometimes referred to as e-business. Although a majority of business practitioners adopt the above classification framework, a few restrict the definition of e-commerce to the B2C scenario only. By virtue of the fact that B2C transactions generally involve retailing, it is sometimes described as e-tailing.

The consumer-to-consumer link in the figure is used to represent two scenarios: an individual selling an item to another individual through websites such as eBay; and a scenario whereby two consumers exchange products or services (trade by barter) using the Internet as the medium. Although the latter of these two is not currently practiced, it could be expected sometime in the future. Business-to-government (B2G) e-commerce represents the transactions that occur between a government agency and a business organization. An example would be Dell Computers business transactions with government agencies through the Internet. In fact, a visit to Dell's website (www.dell.com) reveals that government agencies constitute one of its market segments. Although some transactions currently occur between governments of different countries using the Internet as a medium (G2G e-commerce), the level is expected to increase as more and more countries get linked into the World Wide Web.

In our discussion in this chapter, we adopt a fairly broad view of e-commerce that encompasses the B2B and B2C scenarios. Many large business organizations, such as Dell Computers, are leveraging the Internet to facilitate various aspects of their operations. The extent of use differs depending on the company, and falls on a continuum that ranges from its use to display product and other basic information, to full online operation. While most automobile dealerships are positioned close to the former extreme, companies such as amazon.com, a retailer of books, compact discs and related materials; and furniture.com, retailer of furniture, are positioned close to the latter extreme. There appears to be clear indications that proper planning of e-commerce initiatives based on sound business models will likely lead to success. This is in spite of mixed results regarding e-commerce that have been observed. [In 1999, Dell earned $1 billion due in part to its direct sale business model and its e-commerce initiative, while amazon.com lost $500 million (Chopra & Van Mieghem, 2000).]

As seen in the foregoing discussions, e-commerce spans several areas. Smith et al. (2001) describe the genesis of e-commerce applications in the airline industry: one of the earliest applications of the concept. It has been transformed through many stages, including the times when only travel agents had access to the system, to the present situation whereby customers can directly purchase tickets online through the airlines website or agencies like priceline.com. They discuss practical operations research problems that derive from the need to make information quickly available to customers and how these are being addressed.

Although B2C e-commerce spurred the use of the Internet for commerce, B2B transactions are on the increase, and technologies that facilitate these transactions are being put in place. One such technology is the Internet Exchange, a virtual location on the Internet that brings corporate buyers and sellers together to trade with one another. Exchanges are classified either on the basis of their operational mode or composition. Table 1 provides these classifications and brief descriptions of the items. A major motivation for the use of exchanges by firms is the anticipated costs reduction and improvement in efficiencies that can be derived. For example, consortium exchanges have served as a potent weapon for large-scale manufacturers to aggregate commodity type products, carry out auctions and reduce purchase prices. Firms are also using them for custom part purchase. For example, in 2001, Daimler Chrysler spent more than 3 billion dollars to purchase highly engineered parts for two future car models through Covisint (Konicki, 2001).

Is it only large firms that are using the Internet or deriving the benefits of e-commerce? This is not the case as the relatively low investment and operational costs for basic functions to facilitate e-commerce is making a number of small businesses to cash in on its potentials in similar ways as the big firms are doing. In a survey to investigate the perception of small business executives about e-commerce, Riemenschnieder and McKinney (2002) report that those adopting it have seen benefits in the areas of facilitating communication and accessibility to information. Furthermore, the study also indicates, among other things, that a majority of the executives (about 80 percent) of adopting as well as non-adopting organizations see it as a means to either catch-up with, push-ahead of, or keep pace with, the competition. A significant percentage of those who were yet to adopt the Internet for commerce indicated their willingness to adopt it in the future.

How can an intelligent enterprise determine the appropriate framework for its e-commerce initiatives? There are different schools of thought regarding this question. There are those who believe that it is absolutely necessary for all firms to use the Internet for their operations, while others believe that the necessity of the Internet and the extent of use would depend on the nature of the company's activities and processes. Chopra and Van Mieghem (2000) observe that use of the Internet can result in enhancing value for the customer or reducing process cost. They detail scenarios where it is possible to achieve either of the above objectives as well as cases where both are achievable.