Configuring Microsoft and Linux on the Same Computer

You have alternatives. Using two separate computers is one option. You could try the software created as part of the WINE (Wine Is Not an Emulator) project, which allows you to use some Microsoft software on Linux. You could try related software, such as that offered by Xandros, Lindows, or CodeWeavers (CrossOver Office). You could even install Microsoft Windows inside a Linux third-party proprietary virtual machine application, such as VMWare or Win4Lin.

However, the most commonly used option is still a dual-boot configuration. In other words, you can set up two different operating systems on the same computer. For example, Figure 2.1 shows the standard GRUB menu, configured to start either Red Hat Linux or a Microsoft Windows server operating system. 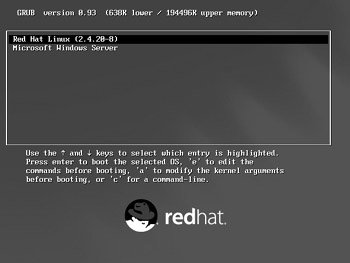 You can set up a dual-boot with operating systems on separate physical hard drives . Alternatively, you can reconfigure the available free space on an existing hard drive. In this case, follow the procedures described in the Step-by-Step section later in this chapter carefully .

Whatever you do, start by backing up your data. Mistakes happen, and you want to be able to recover from a disaster.

As long as you limit the changes to the new empty drive, the risks are minimal. You can configure and format partitions with fewer risks to your Microsoft Windows data on the existing hard drive.

As of this writing, Red Hat Linux can be installed directly only on a regular IDE or SCSI hard drive. While you can use hard drives connected through USB, IEEE 1394, or parallel ports to store Linux directories, Anaconda may not support the installation of Red Hat Linux on these drives.

Not everyone can get a second hard drive. Even if you do, you may not have room inside your computer for that drive. Many people who want to set up Linux and Microsoft Windows in a dual-boot configuration will need to use the free space on an existing hard drive.

If you want to install Red Hat Linux on the available free space on your hard drive, follow this basic procedure. Keep in mind that deviations can put your current data at risk. These are basic steps; the next section describes the dual-boot configuration process in detail.

If you want to use the free space on an existing hard drive, some planning is required. Make sure that the free space is sufficient for all the Red Hat Linux programs and packages that you want to install. Remember to include additional free space for your data and for any applications that you might install at a later date. We discuss space requirements in more detail in Chapter 03 . And make sure that there is sufficient space for your Microsoft Windows operating system and its virtual memory requirements.

As an example, look at Figure 2.2. This is a view of a 20GB hard disk. You have 5GB of files for Microsoft Windows. You could easily split this hard drive into two partitions of 10GB each. The first partition would include enough free space for the Microsoft Windows files and virtual memory. The second partition would include enough room for installing everything from the Red Hat Linux installation CDs. 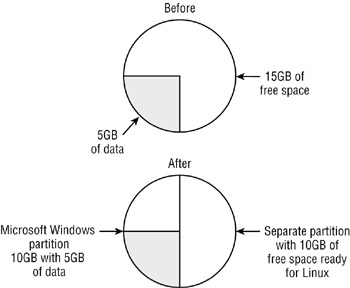 With the big picture in mind, you re ready to go through the step-by-step procedure of preparing your hard drive for Linux. We ve assumed that you want to install Linux on the same physical hard drive where you already have Microsoft Windows installed.

We ve assumed that your hard drive is organized as only one partition, with all space allocated to the Windows C: drive. Alternatively, you could use these steps if the other drives don t provide enough room.

If you already have a hard disk with two or more partitions, you ll probably see this in Microsoft Windows as at least a C: and a D: drive. If you can move all of your files to the C: drive and still have enough room for Windows virtual memory, you can skip this process. Just make a note of the size of each of these drives, to help you identify them during the Linux installation process.

To prepare your hard disk for Linux, follow these steps:

More information is available on FIPS from its website at www.igd.fhg.de/~aschaefe/fips .