Output queues are holding areas for all the reports requested by your users. Reports (a generic term that could apply to a Print key image or to a 2,000-page A/R aging) are generated within an output queue and wait until they are printed, deleted, or moved to another output queue.

The system comes equipped with a number of output queues. QPRINT is the most obvious example. You don't have to use IBM's output queues, although you could. When you create a printer device, the system creates an output queue of the same name.

You should investigate the possibility of creating your own output queues and classify your reports by assigning them to different output queues according to the requirements of your company.

Output queues can have nonsystematic names because it is unlikely that you will have a great deal of them. If you create an output queue for miscellaneous reports that users put on hold, you could name it ONHOLD. Remember that output queues can be placed in any library.

To select an output queue for maintenance, use the Work with Output Queue Description (WRKOUTQD) command.

You can assign an output queue to a user by changing the user profile's OUTQ parameter. For example, if user FRED needs all his reports to go to output queue SPECIAL, run the following command:

Another way to achieve the same result is to go through a job description. This approach is better if several users need to use the same output queue. For example, suppose that both FRED and MARY want their reports in output queue SPECIAL: 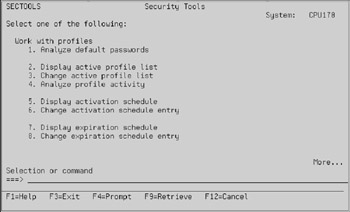