Thus far, we have created nine users and divided them into three groups. We now add the last step of organization: the organizational unit , or OU .

For this portion of the tutorial, we assume that our three departments (Art, Accounting, and Marketing) all live in one huge building, but reside in different wings of that building: 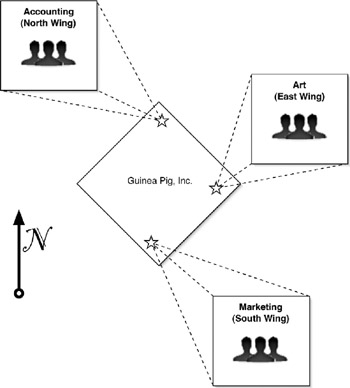 We can use OUs to structure our Active Directory based on this physical arrangement of departments, allowing us to create OUs for each wing of the building.

Your users and groups are now organized inside multiple levels of Organizational Units. Later in Chapter 4, we discuss how to apply rules to OUs that can govern how much (or how little) control users may have over their computers.