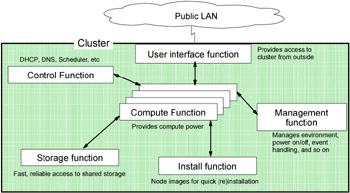 A typical logical structure of a cluster provides the following functions:

Now that we understand the types of logical functions that a typical clustered environment is composed of, let's begin to look at the functional nodes that clusters themselves are based upon. For a more detailed examination of the hardware that is associated with each node type, refer to Chapter 2, "New Linux cluster offering from IBM: Cluster 1350" on page 21.

Nodes within a cluster are generally categorized by functionality, and are listed here:

The term management node is a generic term. It is also known as the head node or master node. The management node aids in controlling the cluster, but can also be used in additional ways. It often contains a dedicated network interface connected to a private virtual local area network (VLAN), defined as a management VLAN, and accessible only to the cluster administrator.

Management nodes generally provide one or more of the following logical node functions described in the last section:

In a small cluster, say eight compute nodes, all of these functions can be combined in one head node. In larger clusters, the functions are best split across multiple machines for security and performance reasons.

From the IBM Linux cluster perspective, the management node that is currently offered for use on the IBM

The following summary of the specifications for the x345 machines is provided here. Also check 2.2.2, "Cluster nodes" on page 25 for more details on the x345.

The choice of hardware and configuration parameters of the compute node should be based on the applications that will be run on the system. The following characteristics should be considered:

As we have said, applications drive the decision of how to build the compute nodes. If the compute node is required to access the cache frequently, for example, the size of the L2 cache and memory subsystem should be considered, a large cache may enhance performance. On the other hand, applications that use great amounts of memory benefit from a faster CPU, system bus, and memory subsystem.

From the IBM Linux cluster perspective, compute nodes are typically either the x335 or the BladeCenter™ HS20 machines. Optionally, the x345 machines could also be used as compute nodes if the x335 does not meet the customer's configuration needs.

Often, when discussing cluster structures, a storage node is defined as a third type of node. However, in practice, a storage node is often just a specialized version of either a management node or a compute node. The reason that storage nodes are sometimes designated as a unique node type is that the hardware and software requirements to support storage devices might vary from other management or compute nodes. Depending on your storage requirements and the type of storage access you require, this may include special adapters and drivers to support RAID5, storage devices attached via channel storage, and others.

From the IBM Linux cluster perspective, the storage node(s) are typically either the x345 or the x360 machines. In addition to these base options customers can decide to use the x335 machine as a third option, if it is determined that the x335 is a better fit for their specific solution.

From the IBM Linux cluster perspective, the storage node that is currently preferred for use in the IBM

The summary of the specifications for the x360 machines is provided here. Also check 2.2.2, "Cluster nodes" on page 25 for more details on the x360.