The security that utilizes authentication does not work the same as IIS under the Apache Web server. This creates a problem for the developer who is supporting Web Service security across multiple platforms. What if you need to support authentication type security for both Java and C#? The trick is to have one service proxy the request to another behind the firewall, or to use HTTPS for the two servers to communicate directly with each other.

In this scenario, you may have a large implementation of Java Web Services up and running, but you need to support authentication under .NET. Because the security schemes for IIS and Apache are largely incompatible, you could still support this by setting up a server running .NET and IIS and then using its authentication system to protect requests to your Java Web Services by having .NET call these services once IIS authenticates the request. This may also be useful if the enterprise has Web Services that are Java based running somewhere behind the firewall but the Web team only supports Microsoft products. Figure 10.15 shows the .NET Web Service proxying requests behind a firewall to Java Web Services running in an enterprise setting. Notice that by having a server in the DMZ, the firewall determines where requests go and what server’s machines have access to. Figure 10.16 shows two Web servers operating within the Demilitarized Zone (DMZ) and proxying requests to each other based on the system (.NET or Java) calling the objects. 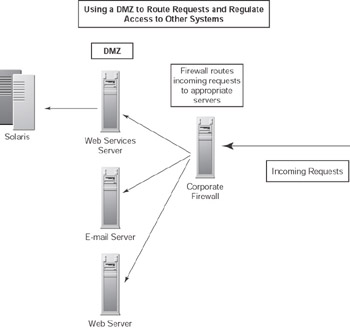 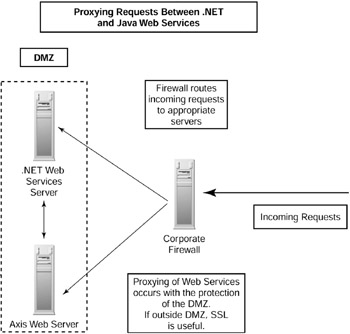 Figure 10.16: IIS and Apache Web servers sitting in the DMZ proxying requests to one another depending on the consumer who makes the request.

The previous snippet is typical of the other C# Web Services shown in the book except, instead of performing a function, it sends a request to a Java Web Service and returns the response. Note that the Web Service could call another .NET Web Service as well.

The following snippet is from a consumer written in C#. Notice that this event occurs in the method button1_Click indicates that this code comes from a GUI-based application.

Right before the code makes the first method code, the code creates the authentication credentials. So the consumer calls one Web Service with the appropriate credentials and the responding service then sends the request to the Java Web Service.