Events occur and conditions causing alarms arise spontaneously in all systems. Some of these need to be brought to an operator's attention, some need to be logged for later review, some need to be passed to monitoring and analysis equipment (the "P" for performance in FCAPS) and many can be ignored. The handling of a particular alarm may change from minute to minute: perhaps an operator is trying to pin down an elusive fault and wants to be alerted as soon as it occurs, perhaps a particular fault is only important on certain days or if another fault has not also recently occurred.

The WBEM server provides the interfaces to allow operators to specify precisely the faults for which they want to be notified and to turn the notification on and off. The classes used to establish this monitoring are included in the Event Common Model.

There are several components in the path between an event occurring in a piece of hardware or software and an indication arriving on the screen of an operator. These include:

This whole mechanism is illustrated in Figure 8.1 where time is assumed to flow from top to bottom of the picture. The flow of activity in the figure is as follows : 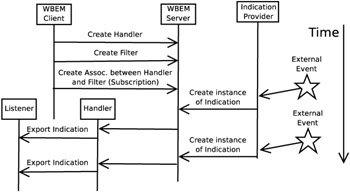 Figure 8.2 gives a little more detail of how filters and handlers may be combined. On my toaster there is an alarm, called TemperatureAlert , which signals a high or low temperature on the heating element. I have created two filters: one passing (accepting) alarms if the temperature becomes too low, the other passing alarms if it becomes too high. Handler 1 sends a copy of the Indication to the local fire station which is interested in the temperature becoming too high whereas Handler 3 is connected to my toaster repair shop which is only interested in the temperature becoming too low. I am monitoring Handler 2 myself and need to know of either event so it receives both types of Indication. Note that Figure 8.2 is an informal diagram: it is not UML.

If you are creating a listener to receive information about a particular alarm then you need only create a handler for it, define a filter (unless one already exists) and then create an instance of the association (the subscription) between the filter and the handler. Your listener will then start to receive events from the managed device as they occur. What it does with them is, of course, outside the scope of WBEM/CIM but could include writing a log file, sending a message to a pager, opening a window on an operator's screen or sending an e-mail (or instant message) to an operator. If the operator is managing the device with a Web browser, then possibly a Java thread could be waiting on the arrival of these messages and creating a pop-up window when they arrive .