Wiggly Selectors (unlike Range Selectors) aren't used to isolate characters. Instead, they are used to add random animating changes to the characters already isolated by the Range Selectors. The random changes will be made to any Properties you've added to the Animator Group. For instance, if you've added the Scale Property and adjusted it so that its value is 200 percent, the Wiggly Selector will add random Scale changes to the characters as the comp plays. The 200 percent value will now act as a maximum Scale value. So as the animation plays, you'll see changes like this: hello, hello, hello. If you've isolated some characters with a Range Selector, only the isolated characters will wiggle. Try this: 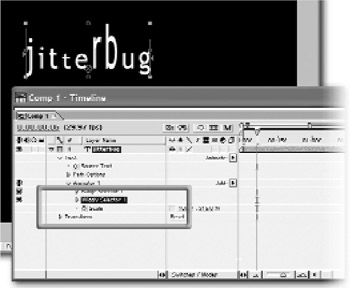 If you play the comp now, you'll see the Scale animating. Try twirling open the Wiggly Selector Group and adjusting some of its properties. For instance, you can add more wiggles per second by increasing the Wiggles/Second property value. To wiggle on a word-by-word basis instead of a character-by-character basis, choose Words from the Based On property dropdown menu.

As an alternative to using a Wiggly Selector, try twirling open the Range Selector > Advanced properties and setting the Randomize Order property to On. Whereas Wiggly Selectors randomize the amount of scaling (or rotating or whatever), Randomize Order randomizes which characters are scaled (or rotated or whatever) from within the Range Selector's boundaries.