Wipe Your Feet on the 3D Matte

Say you import a 3D animation of a car moving towards the camera. You'd like to insert a 2D image of some smoke halfway through the car's journey, so that it starts behind the smoke, drives through it and ends in front of the smoke.

To achieve this effect, you'd apply a 3D channel effect like 3D Channel Extract to the car layer. Then you'd click with your mouse at the point where you want the smoke to appear (halfway back into the scene). After clicking, you can read the Z position of this point in the Info Palette. 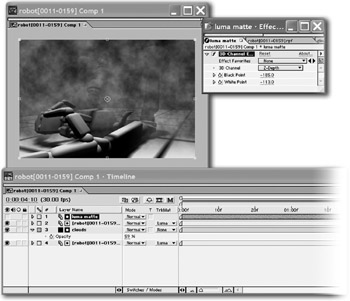 Adjust the Black Point and White Point properties in the 3D Channel Extract effect properties, until you get a matte in which the white starts where you want the fire to begin and ends at the camera. Everything behind the fire line should be black.

In the comp, it will appear as if the car is passing through the smoke.