Fundamentally, a component allows you to manipulate variables within ActionScript without having to delve into the actual ActionScript. For instance, let's say you had some ActionScript that utilizes Flash MX's ability to draw a rectangle with code. Even something as simple as a rectangle has several potential variables. How high is the rectangle? How wide? Where is the rectangle on the stage? What color is it? What is its alpha?

All of these variables can be "hard-coded" within the ActionScript, meaning that the variables are part of the code. The problem with this is that if you want to change these variables, you must go into the code. Finding and editing the code required to generate a rectangle would not be particularly hard. However, components that perform more complex actions like creating a collapsible menu or a game contain code that can be hundreds of lines long. 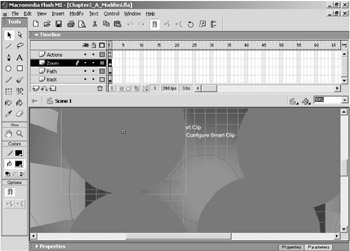 Furthermore, the code might not all be in one place. For complex resources, finding and editing the variables can be difficult and time-consuming even for experienced programmers-even for the person who wrote the code, particularly if they need to change the variables a long time after they originally wrote it. Components provide a solution to this problem and, in the process, make the code easier to customize, for the programmer and nonprogrammer alike.

Go ahead and test the movie to observe what it does (see Figure 2.2). What you will see is a rich animation. If you look carefully, you'll notice two types of animations, both of which utilize simple circles. A series of circles marches end to end, and lines of circles march up, down, left, and right in all different sizes and varied opacities. Each line of marching circles is controlled by a component. Notice, also, the series of circles that zoom in and out of view. Some zoom in, some zoom out. Each zooming circle is also controlled by a component. Close the test movie. 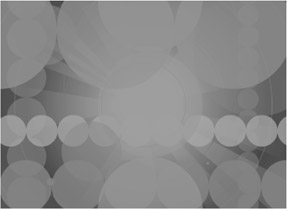 Figure 2.2: Multiple copies of two components are used in this example to generate a rich, textured, animated background.