The desire to model reality in computer games is one that has driven game development for a number of years . The more real we make the games , proponents say, the more compelling and immersive gamers will find them. But is this always the case? What would a greater degree of reality add to a game like Tetris or Centipede ? Surely they could not be much more immersive than they already are. Consider a game such as Age of Empires , which is already modeled on reality. Would adding more reality to it make it any more fun? Actually, quite the opposite is true: adding a more realistic economic model or combat system would detract from the game s strengths as a macro-strategy game and quite possibly make the game more annoying than fun.

The trouble with modeling reality in games comes when titles get mired in reality to the point where they come to resemble real life a little more than players actually want. Alfred Hitchcock described films as Life with the dull bits cut out. Indeed, games can be seen as modeling life or some aspect of life while leaving out the tedious and boring parts . If the designer, in an attempt to achieve a greater degree of reality, decides to include too many unnecessary and dull details, the game will likely become tedious to play. My favorite example of this is the use of food in RPGs. Many RPGs of the 80s were perpetually on a quest to make themselves more real than other RPGs, to up the ante with each new game that was released. One way designers attempted to do this was to add a basic hunger simulation, and to require players to remember to feed their party members periodically, lest they starve to death. Here was a dull bit that did not need inclusion, especially as eating regularly scheduled meals is not the first thing that jumps to people s minds when they think of adventuring in fantastic worlds .

Using reality as a basis for your game has its advantages, however. First and foremost, it provides players with a world they are instantly familiar with, a world in which they have some idea of what actions are reasonable and which are out of the question. Whether in Civilization , SimCity , Deadline , or Grand Theft Auto , a properly executed realistic setting gives players an instant in to your game-world. They understand or at least think they understand how it works and what they can do to be successful in it. Players can start playing the game and instantly have some idea of what they are supposed to accomplish. A more abstract game like Centipede or Tetris , on the other hand, has such abstract goals that players must be taught what it is they are supposed to do, either through reading the directions or by experimenting with the game-world.

Beyond the gameplay advantages, in terms of story and setting, placing your game in a real-world setting can be much more meaningful to players, allowing the actions that take place in the game-world to resonate with them more deeply than if your game were set in abstract worlds. The Sims works in part because of its well-balanced gameplay and simulation, but also because of its real-world setting that allows players to feel that their actions have real meaning to the simulated people they are guiding. My game Damage Incorporated , though it admittedly had a somewhat implausible premise , was set in the real-world and dealt with real-world issues that made the missions and their outcomes more relevant to players than if the game had been set in outer space. Similarly, The Suffering , despite having supernatural creatures spawning out of every nook and cranny, was set in a believable prison environment populated by recognizable and plausible characters . Thus it was able to deal with weighty and serious themes in a more resonant fashion than if the game had taken place in some demonic netherworld. 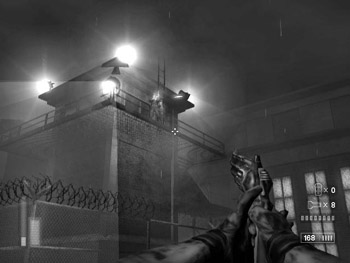 Having a believable and recognizable environment was a big part of The Suffering s appeal .

A potential downside to having a realistic world is that, since the game mimics a reality players are familiar with, players will expect certain game-world elements to work in certain ways and will be very quick to notice when something fails to do so. For example, many of the early first-person shooters, such as Doom and Marathon , did not allow the player character to jump. The worlds of these first-person shooters were more realistic than those game players were accustomed to finding in computer games, so real that players expectations were raised and many were quick to complain that they could not jump over even waist-high obstacles. So the next generation of FPS titles added the ability to jump, then to crouch , then look up and down, and so on and so forth, making the games still more complicated with each element of reality added. Now, as the worlds possible with RT3D engines look more real than ever, players are constantly asking questions such as Why can t I lie flat on the ground? I can do that in real life; why not in the game? Indeed, many of the more complex first-person shooters have added this very feature. Some would say that, certainly for novice players, these FPS games have grown too complex as a result of their attempt to model reality. Bringing in a certain level of reality raises players expectations in a way that the totally abstract world of a Centipede or Tetris never does. Players never question their capabilities in these worlds because the boundaries were completely arbitrary in the first place.

At the same time, players are particular about the type of reality-based improvements they want in their games. For example, if FPS games added a more realistic modeling of player movement, players would be irate. If suddenly you were able to trip over low-lying obstacles or always fall down to your knees whenever falling from more than five feet, the experience of running around the game-world would be considerably more aggravating. These are the tedious parts of real-world movement, and therefore can and should be ignored. In the end, most players only want more realism if it means they get to do more interesting and fun things, not if it makes their game experience more frustrating.

So is there a definitive answer to whether or not you should model reality in your game? Of course not, just as there are no easy answers in all of game design, and as there are no easy answers in art. As a game designer you must strike the balance between reality and abstraction, weighing what your game needs from a gameplay standpoint with what your story and setting require and with what your engine can reasonably handle. What is vital to remember, and what many designers often forget, is that more reality is not always a good thing. At the same time, saying that reality does not matter and that fun is the be-all and end-all may prevent you from creating a world that resonates with your audience.