This chapter describes the basic structure of a personal computer, along with a list of tools needed by a PC technician, and some general advice on computer repair. 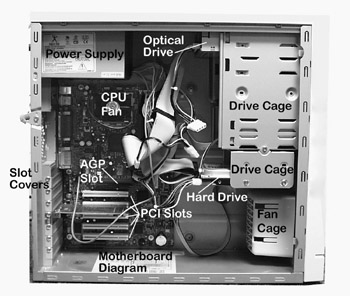 Some terms are commonly misused. The most basic of these is the computer itself, which is the box containing all the main components. All peripherals are connected to the computer. The computer is not the modem, hard drive, or CPU. These three terms represent individual components that are part of the computer. They, along with other terms, are defined here.

Case: The cabinet that holds the main components of a computer.

Power supply: A box-shaped device that converts wall-outlet AC power to low-voltage DC used to power the devices in the computer.

Motherboard (system board, main board, desktop board): The large printed-circuit board to which all other parts are connected.

Central processing unit (CPU, or processor): The chip that performs all of the calculations necessary for the computer to do its job.

Random access memory (memory, or RAM): Chip assemblies that store data for very quick recall. The main memory in a computer requires constant power to be able to hold data. Every task performed by a computer requires the program and data to be loaded into memory.

Basic Input Output System (BIOS): A program that works as soon as the computer is powered on to test hardware, locate the OS startup files on the hard drive in order to start the OS, and support the transfer of data among hardware devices. The BIOS is usually stored on a Complementary Metal Oxide Semiconductor (CMOS) flash memory chip. Flash memory is expensive memory that holds its data indefinitely after the power has been disconnected, but the data can be changed. See Chapter 2, "System Configuration and Computer Hygiene," and Chapter 3, "Motherboards and Their Components," for more information.

Optical drives: Including CD-ROM, CD-RW, DVD-ROM, and various writable DVD drives, optical drives are devices that read, or read and write data from or onto discs using laser beams.

Floppy disk drives (floppy drives, FDD, diskette drives): Devices that store data on removable magnetic disks. Virtually all floppy drives sold since the mid-1990s have been of the 3.5" variety. These floppy disks are enclosed in a thin, hard, plastic shell. Because of this, they are sometimes confused with hard drives. However, because of their limited capacity, their susceptibility to data loss, and other reasons, floppy disks have become much less useful in recent years. However, as you will see in subsequent chapters, floppy disks can be indispensable for certain repairs.

Ports: Connectors, usually on the back of the computer, to which peripheral devices can be connected.

Modem: A device that allows the computer to access a telephone line for the purpose of faxing, Internet access, data transfer between computers, or other telephone-related uses. Internal modems plug into expansion slots, while an external modem connects to a port on the computer.

Monitor (display): A device resembling a television that displays the computer's video images.

Sound card (multimedia device): A device whose primary function is to allow a computer to play and record sound. A sound card can either be a separate card that plugs into an expansion slot, or a component built into the motherboard.

Video card (video adapter, graphics adapter, display adapter): A device whose primary function is to generate a video signal ("picture") to be shown on the monitor. A video card can either be a separate card that plugs into a slot on the motherboard, or a device built into the motherboard.

Network card (network adapter, network interface card, NIC): A device that connects the computer to the network. A network is a group of computers connected together so that they can communicate with each other. Network cards either come as a separate card or are built into the motherboard.