The macro-union operator of MAD is proposed in Fortunato et al. (1986). It was subsequently reproposed with the name of fusion. It works on two operands and, if necessary, recomputes the numeric values of the measure. In other words, given two MADs with common schemas, this operator provides a new MAD in output by taking the set-union of the facts described by the two MADs in input, and of the fact-dimension relations. This means that the definition domains of each category attribute of the output MAD are the union of the definition domains of the corresponding category attributes in the input MAD. Partial overlappings can happen between two category attributes with the same primitive definition domain. Null values can appear, with the meaning of "not available measured data" (‘NA’). Operating only on one dimension, it performs the union of the categories and the partial orders. An example of a macro-union operator application is shown in Figures 12 and 13. 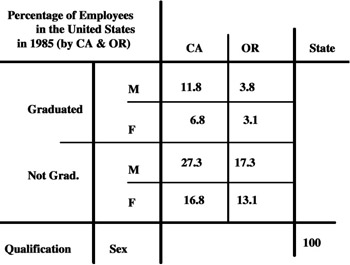 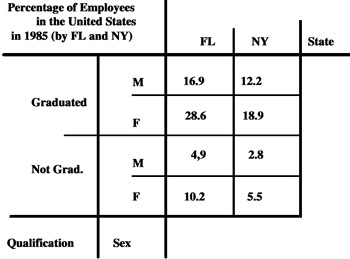 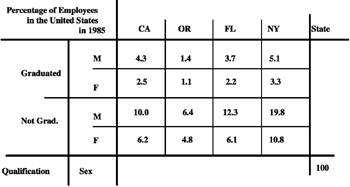 Obviously, in order to have a MAD in output which makes sense, each pair of category attributes combined together have to belong to the same dimension (generally the same hierarchy and often the same level of this hierarchy).

It is important to note, similarly to the Restriction operator discussed in the following, that also this operator depends on the summary type of its measure. In fact, if its summary type had been "percentage," as in Figure 13, the single values inside the cells of the MAD would have had to be recomputed in order to maintain consistency in the information. For this recomputation we need a predefined distribution function, represented by a table TD, or, often, by an expression which shows the rate which defines either the "weight" by which to compute the data in the MAD in output, or the way to relate this weight to the summary data in the MAD in input.

be a MAD which describes a given fact

of a given phenomenon and which is defined on its MAD schema A1 = {A1j}, and let

be another MAD which describes another fact F2 of the same phenomenon and which is defined on its MAD schema A2 = {A2j}.

The union of s1 and s2 produces a new MAD

p3 is the new name of the MAD;

s3 is a union of the sets of the summary values of s1 and s2. Notice that these values, sometimes, have to be recomputed, for example, if the summary type is "percentage" and the grand total is normalized to 100. This recomputation is transparent to the user.

Finally, another term used for this operator is juxtapoint. It refers to two different situations. The former regards MAD with a different summary type of the measure. In this case the result of the operation consists of a new composite MAD, and the juxtaposition happens along one dimension common to the two MADs. The latter consists of a new MAD for which, if the summary attribute of the original MAD is not summable (e.g., average), the instances inside its cells have to be recomputed, according to the aggregation function applied to the microdata to obtain it.